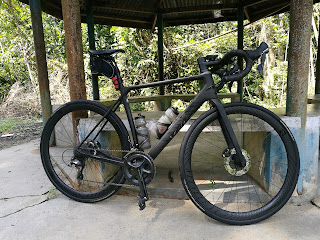 I had been raving about this bike long before I rode it. In my view Canyon have really come up with the way forward for riders like myself here. The mantra with the Endurace model is to offer the vibration-damping of an endurance machine while not losing the character of a carbon race bike. Add to this the shift to disc braking, and the clearance to use wider tyres and this becomes a really versatile, all-weather, all-road-condition breakthrough. The price point for the CF SLX, their top carbon frame, also made it attractive as a complete set-up, since for around USD$4k (current 2018 price) you get the frame and a Reynolds Assault wheelset, equipped with full Shimano Ultegra mechanical components. Shipping will cost you another $340, plus whatever import tax into wherever you are.

I'd come across enough glowing reviews, not only of the Endurace as a bike, but also of the Reynolds wheelset, that I would have gone for this bike over most others on the market anyway, with it's absolute specificity for the kind of endurance riding that I gravitate towards these days. Factor in my recent awakening to the sheer practicality of disc braking, and this one had my name on it.

Despite these lofty expectations, I have so far spent almost every minute on this bike grinning from ear to ear. It is nothing short of a revelation. I still fully expect this sensation to endure for a while, since I'm only now scratching the surface of the list of rides that I bought it for. Plenty of happy miles ahead!

If anyone needs an introduction to the Canyon phenomenon, I'd say it's like the bicycle version of Apple in the early days: a brilliant combination of innovation, design and engineering. On top of that, the bikes are only available through direct sales from their factory in Koblenz, Germany. This not only means they are totally in control of every aspect of design, manufacture, assembly, sales and shipping, but also fully responsible for following up should anything not be to your liking. 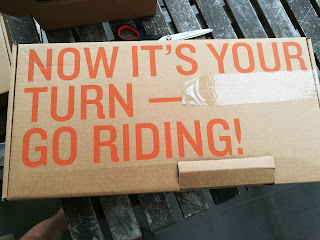 It also means that they beat the shit out of the competition. Their prices are way under the equivalently set-up machine from any of the other competitive brands. And with their presence in the world of professional sport - they are regularly ridden to wins at World Championships, Grand Tours and Monuments, and visibly sponsor many professional athletes and cycling teams - there can be no doubt that they make seriously good bikes.

I had heard a couple of  (unverifiable) horror stories about the delivery time, but my experience was quite the reverse. I paid for the bike by credit card online on Friday morning in Singapore, and it arrived by UPS the following Monday at my door. In fact it was already in Singapore Sunday morning but only cleared customs in the afternoon ready for delivery the next day. Less than 4 days door-to-door, half-way around the planet. So far 100% nailing it! 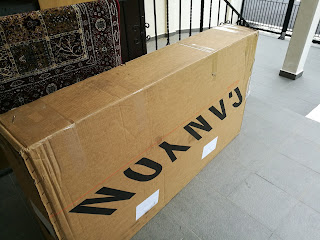 The bike arrives in its own purpose-built box, basically fully assembled, though the front wheel, seatpost/saddle and one-piece handlebar/stem assembly are removed and strapped carefully to the frame with plenty of foam rubber pads separating the parts. The box also includes a simple hex-key torque wrench, a hefty manual, various bit and pieces, and any accessories you ordered with the bike. There's also a smaller booklet with basic initial out-of-the-box assembly instructions. 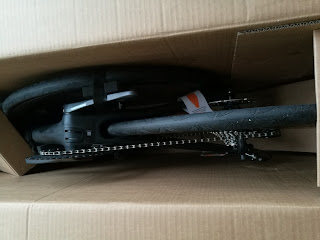 Most of this literature was not immediately very helpful, as the instructions are non-model-specific, and since the Endurace comes with quite a few idiosyncracies, including a one-piece bar and stem, and disc brakes, I had to look quite hard to find any reference to these specific set-ups. I'm fairly confident of my bike-assembly skills, so I did manage to get everything into place soon enough, but I would think a lot of people might rather leave this to a mechanic they trust. 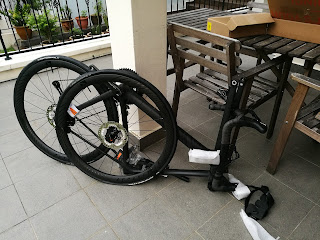 For a start, the bar and stem are the one-piece H31 Ergocockpit. So whereas the manual explains the process of mounting handlebars on a stem already attached to the steerer tube, the Endurace comes with the steerer loosely mounted in the headset assembly, and you will need to mount the Ergocockpit onto the steerer with the spacers positioned according to the height you want, taking care to make sure the bearing cups all line up, and then tighten the headset cap carefully to the point that there is no play in the headset, but that the steerer rotates freely. You then tighten the stem bolts once the bars are in position to a torque setting of 5nm, and the crown ring which holds the headset in place to a mere 1nm. Careful here!

I actually managed to over-tighten the bolt on the headset crown ring, as I was following the general rule in the instructions that 5nm was an appropriate torque setting, only to discover - once I'd cracked it - that there was a small, faint "1nm" printed beside the bolt. Sorry guys, my eyes are really not that good. It didn't seem to have any negative effect on the steering however, as the forks were already held firmly in place with the stem bolts. I have already received the replacement part FOC within a few days of pointing this out to Canyon, so all good. 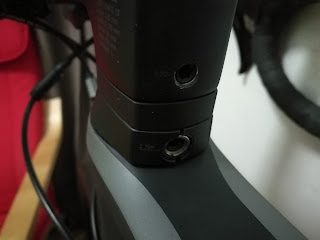 Next thing was mounting the disc brake front wheel with the through-axle. Again, possibly not so self-explanatory if you're the average roadie, but straightforward enough. Taking care to slot the disc rotor between the brake pads, the wheel hub slots neatly into grooves in the fork, and you push the axle through from the left and then using a 6mm hex key, you just screw it into the thread on the other fork. This is a brilliant feature which makes the wheel-mounting massively more secure, stable and consistent.

After a few rides I was getting a slight rubbing of the front discs on the pads, and discovered that the through-axle had loosened itself. Once tightened, the rubbing disappeared, and it hasn't happened again since. There is a "quick-release" type handle on the back axle which can be detached and used for either, but since I always carry a multi-tool anyway, this is probably something I'll remove at some point. Makes the wheels much harder to steal.

The next thing to mention is the S15 VCLS seat post. This is one of the main shock-absorbing features of the Endurace. It's basically a leaf spring where the saddle is mounted on a bridging platform between 2 halves of the post. Aside from it's shock-damping properties, this is actually a very clever design for a seat post. The 2 leaves of the post are held in relative position by a bolt recessed into the bottom of the post. You adjust the level of the saddle by loosening this bolt, replacing the post in the seat tube, getting the exact level you want on the saddle, taking the post out again, and tightening the bolt. Once you've done this the level will not shift regardless of adjustments you make to the height, or position of the clamp on the rails. 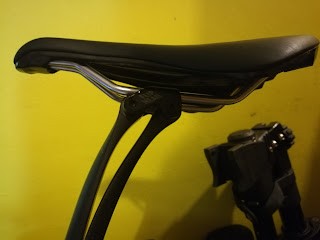 I had read an early review complaining that there was an unpleasant spongy feeling from this seat post, though more recent reports had not mentioned this, so it may have been a teething issue with the early design. As far as I'm concerned it feels very close to a solid seat post, but it is very effective in reducing the road vibrations to the body. This alone is a design award-winner in my book.

The saddle that comes with the Endurace is a Fizik Aliante. Not a saddle that works for me so I changed it. I'm now using the new Specialized Power saddle, which does seem to work well - more on that elsewhere.

Since the one-piece Ergocockpit doesn't allow for rotation of the bars, and since I wanted a couple of cm more reach, I moved the position of the shifters around the curve of the drops by a few mm, and got exactly what I needed.

I have also now switched out the Ultegra cranks for a Rotor 3D+ crankset with the INpower meter. This also involved a new BB pressfit bearing set. I did like the Ultegra cranks, and the 52/36 "semi-compact" chainrings are a great match with the 11-32 cassette, but I'm used to 175mm crank arms, and the size M frame comes only with 172.5mm arms.

It is one unfortunate feature of this type of sales process that you can't really tailor components to your exact requirements, so you may have to spend a bit more to get it exactly right. You can always sell off the bits you don't use. 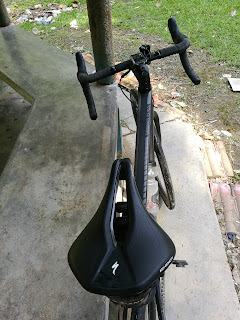 
Out on the road, the immediate sensation is one of floating. The combination of all the built-in shock absorption features and the 28mm tyres really smooth-out any vibration from the road surface. However, once you get out of the saddle or start to put a bit more power into the pedals, you realise that there is plenty of agility there. It just feels so stable and robust at a cruise that it's responsiveness to changes in pace takes you by surprise.

On descents it really inspires confidence. The wheels are fast and aero, and with 28mm tyres and disc brakes, there's a real feeling of security, and a robustness that is only reinforced by the whole bike. The front end is super stable: I can't quite get over the solid feeling of the one-piece bar and stem despite it's relatively slender aero front profile. No idea how they manage it. German engineering!

One issue to note is that you will need inner tubes designed for a 28mm tyre. I wasn't aware of this, and expecting to be able to use my existing stock of tubes, I discovered after repairing my first flat on these that the tubes I have, designed for tyres up to 25mm, will inflate very unevenly in a wider tyre. One rather lumpy ride home followed.

Read Part 2 - the road test - in a separate post as part of an endurance ride story. Much more to come!
Posted by Cafe Rider at 5:07 PM