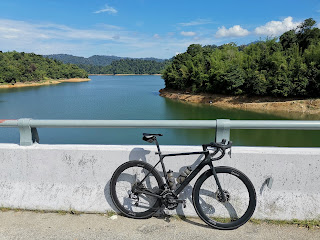 I bought these wheels originally as a spare set. Once I started riding them, all that changed.

My epiphany with disc braking had happened with the Canyon Endurace - still so firmly elevated above anything else I've ever ridden, that I still have wow moments a year-and-a-half into our relationship.

In the interim, I have got rid of all but one of my rim brake bikes, and have been long planning to replace that last one with a disc-brake version, but.... I just really don't know what to get... another Endurace?

The immediate dilemma, however, was that virtually all of the components of my 2 bikes were mutually incompatible. So when the Reynolds Assault wheels that came with the Endurace needed new bearings, I had no choice but to live without the bike until I could get them replaced (not the easiest task in my neck of the woods). I decided I needed at least a second set of disc-brake wheels.

I already own one great set of wheels (my last rim-brake ones!) from Hunt (the Race Aero Wide - read my review here), so I had no reservations in trusting them with another purchase, especially as their technology - as an aspiring, forward-thinking, young British company - was well-ahead of the tech game of most of the established manufacturers, and they had been designing carbon road wheels built specifically to the format of disc-braking for a couple of years. If Hunt are not yet well known to the average roadie, I firmly believe they will be soon, and at a price point of GBP850 per set for these wheels (including free shipping worldwide), they are still really good value.

With a 50mm deep and 27mm wide rim, plus relatively low weight (1487g naked), the 50 Carbon Aero Disc seemed the perfect choice. My riding agenda is basically long days in the hills, so light, aero, robust, wide, and tubeless seems like a good starting point.

Not that the Reynolds wheels hadn't pretty much nailed it already. As I said, I was thinking of these as a second set of wheels, possibly for flatter routes since they had an extra 5mm or so of depth, but with no real weight difference between the 2, I'll admit that I was kind of half-expecting that the Hunts might take over. 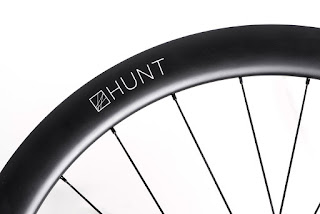 Setting these wheels up out of the box as tubeless (with Schwalbe's 28mm Pro Ones) was way easier than with the Reynolds, and I managed it with a normal track pump for the first time. The tyres went on super easy, partly because the central well in the rim is very clearly engineered, and as long as you make sure the valve is between the 2 side of the tyre wall, they inflate pretty easily, and pop into their grooves like a dream.

They come with some nice lightweight valves, which so far have lasted well through a couple of tyre changes. Getting the tubeless tyres off is never going to be easy, and I'd suggest getting both sides of the tyre unseated in one go if possible, as if you get one side completely unseated it makes the other side horribly difficult.

I'm using Stan's Tubeless Race Sealant, which I would recommend. It's a bit thicker than their normal sealant, and stops air-loss through punctures quicker when out on the road. You can use a small amount of sealant to help initially inflate the tyre if needed, though it can be a bit messy. To get the 50ml or so of sealant into the tyre for puncture resistance, I have tried pouring it into the sidewall of the tyre before fully seating it with mixed (and messy!) results. Though it doesn't seem to be recommended by anyone, it works better for me to remove the valve once the tyre is seated, and inject it in through the valve stem.

Once I started riding them, I noted a tangible aero advantage over the Reynolds on the first few rides, but otherwise they seemed to do the same job.... only slightly better. They are a nice balance between a solid, robust feel to the drive and steering, while also having the compliance needed for some of my rougher roads.

The 28mm tyres work well on them, and create a pretty smooth front end to the wind, and of course lots of cushioning at 65/70psi. I could go lower on the pressure for sure, but I'm always a bit concerned to keep a good initial inflation to offset what I might lose in the process of the tyre re-sealing itself on my often epic expeditions. At 72kg (plus 8kg of bike/gear) that pressure works well, and gives me good traction in most situations.

The hubs roll very nicely, with the freehub sound being quite distinctive, and probably the loudest of any wheelset I've had. The stealth look, with the small spidery graphics, grows on you, and works particularly well with the Canyon's overall aesthetic.

Over the 8 months or so since I've had these, they have become just another joyful part of a pretty amazing package. In the 10,000 odd kilometers that they have accompanied me, they have behaved themselves beautifully. I've replaced tyres on both front and back in that time, and it's no longer quite the dreaded experience that it once was. I did have a bit of concern that they were trapping water in the rims during a particularly biblical rainy season, but it drained off pretty quickly, and no issues since.

I'd also have to point out that the conditions I'm mostly riding in Malaysia are quite demanding on a set of wheels, as road surfaces are often rough or broken, and with tropical flash-floods a common occurrence, there's often a lot of shit on the road. I've tested the strength and resilience of these wheels probably more than most users, though I haven't succumbed to the new fad of gravel.

In the modern era, with braking considerations now firmly disengaged from your rim design or material, I'd say that these wheels represent the ultimate in all-round performance,. There are very few situations or conditions that I would find myself looking for a different wheelset, and I'm not likely to be that serious about a KOM or Everesting challenge anytime soon.

For my riding purposes at least, I've pretty much nailed what I want from a bike. This really now is one bike that does it all.