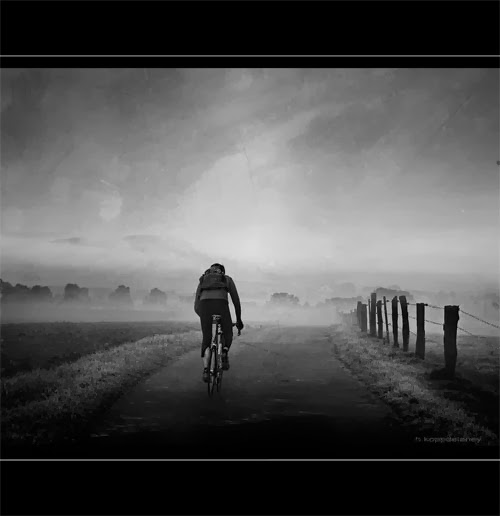 In which we get our act together again after more than a month of relative inactivity. This is the beginning of my "season", though mostly my target "races" are just tours with my bicycle touring operation ranging from 2-days to a week.

I'm sharing my own experiments with training here so this is by no means a recommended training plan, but I've been experimenting with my own body using different ideas on training for many years, including training concepts and plans by some of the greatest minds in sport science, so there's some foundation to the concepts. I do welcome comments, constructive criticism and suggestions if you have any. I'm here to learn.

So I've decided I'm committed to the experiment with what some refer to as "reverse periodisation". The basic premise being that you start hard and increase distance later. I've now completed my first block of real training, so though it's a bit too early to assess the effectiveness of the method, I can at least assess how it felt. 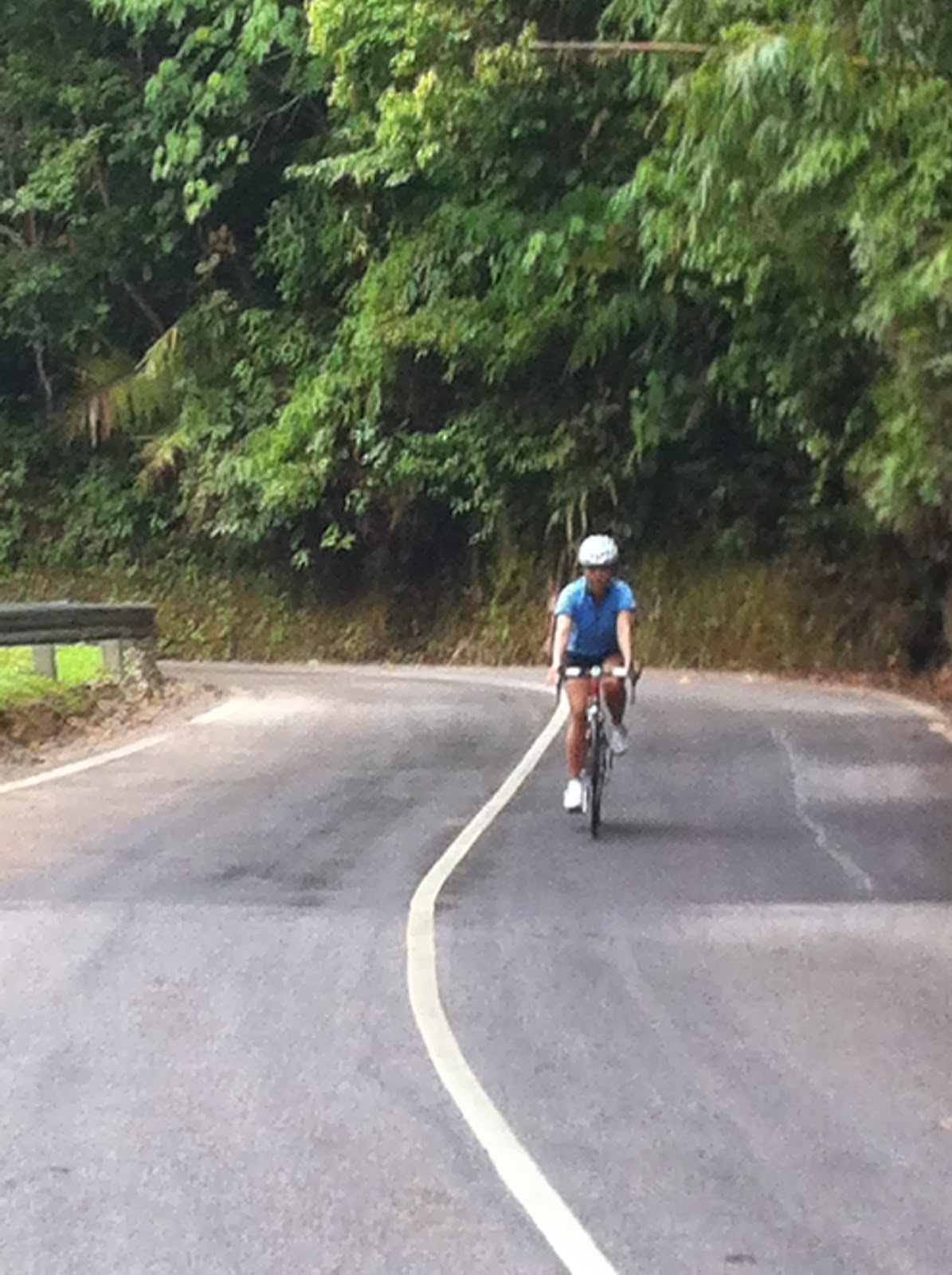 My training blocks for the last couple of years are based around 17 days on, 4 days off. Within that 17 days I'll take 2 days of complete rest - usually on Mondays (my Monday work schedule is pretty full-on) but I go by how my body feels too. I also have to figure in 3 runs a week and strength/core sessions at least twice a week, plus I have a short pool session 2 or 3 times in a week. Sounds like a lot, but I'm not doing the kind of riding volume I'm used to, so aiming at shorter, harder workouts. I'm also determined to keep my overall body strength and running form together. I don't push anything off the bike hard at all, apart from one of my weekly runs doing cruise intervals (for my approach to run training).

I tried doing the often-recommended 3-weeks-on / 1-off in the early days of my training life, but I gradually found 3 full weeks of training to be too hard for my aging body, so I brought it down to 2-weeks-on / 1-off which is sometimes suggested for older athletes. That was too much rest, and I rarely managed to keep a whole week easy anyway. I even tried 6-day weeks for a while, but that was too hard to keep track of. So I devised this way of just taking a 4-day rest period every 3 weeks and it seems to work well for me.

So for my quality workouts at this early point in my season, the focuses are the components of: Form, Force, and Threshold in that order of priority. I'll generally limit it to 6 real quality sessions on the bike per 17-day block. Form doesn't intrinsically require hard effort so all workouts will include form drills. Of the 6 quality sessions, 3 will be force, 2 threshold, and 1 random (hilly or group ride). I consider most group rides as kind of random quality (Threshold mostly) workouts, and they're usually longer, so I may have to lose one of the focused threshold workouts, and be flexible with recovery needs. 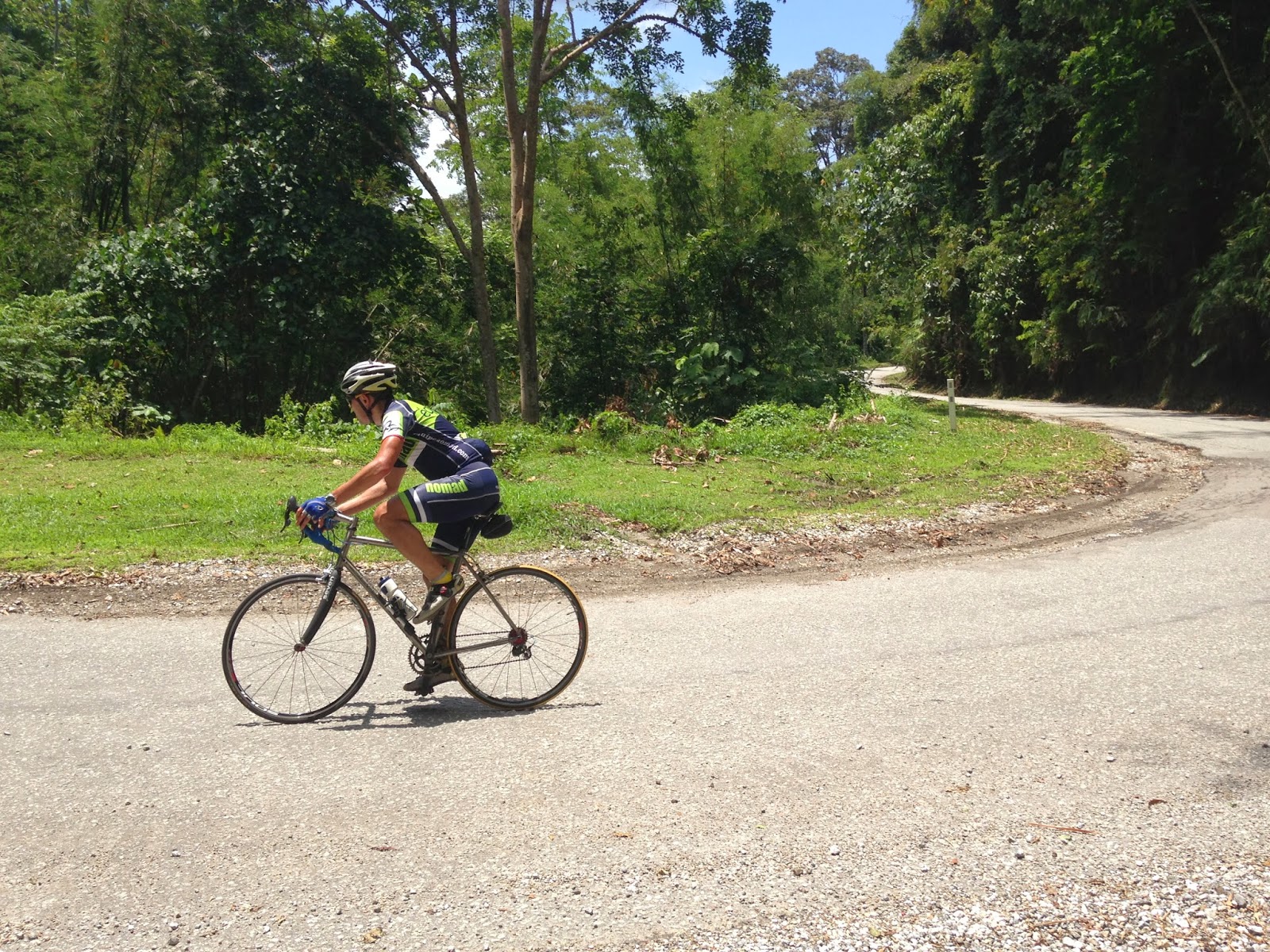 For Form I work on high cadence drills mainly as a warm-up to other rides. I would be doing one-legged drills if I could bring myself to get on a home trainer, but I just find it too mind-bogglingly boring. I also work on the full pedal-stroke when the cadence comes down on hills, especially with the hill reps that I mention below - when you're pedaling against a lot of resistance at a slower cadence it's easier to focus on maintaining pressure on the pedal cycle all the way round, and with an equal balance of left to right leg.

For Force, in keeping with my aim to reverse-periodise, I am starting out working on seated hill repetitions of roughly one minute with a 4 minute rest interval spinning. The idea is to keep it in a gear that keeps your cadence low and your force at maximum. It's like weight-training on a bike. As I mention above, I keep the pressure on the pedal cycle all the way round so that my core is as motionless as possible in the saddle. These are really quite tough so you should probably start lighter at the beginning, and you definitely need a good warm-up before you start this session. I'll begin with just 3 reps the first week and then add more as my fitness improves. If you feel like you can't manage another good one, don't. With a power meter, a good way to judge when to stop is when your power for the interval drops by more than 5% - that's your last effort. It's usually fairly obvious - it feels as hard as it did before but the watts are way less.

For Threshold I start with 5-minute efforts with one minute spinning in between. I keep the cadence high and the effort as constant as possible. Again, I'll aim to complete 3 the first time out and add more as my fitness improves. It's not a main component at this stage so if I do a hard group ride I'll usually ditch the Threshold workout.

This is a real matter of developing your inner sense of pacing to begin with. The use of a power meter and heart-rate monitor will make your training much more quantifiable and enable you to track progress accurately. It's easy to become obsessed by your gadgets though, and you have to remember that the desired aim of training is not the numbers but the Training Effect: you put demands on your body beyond what it can cope with comfortably and it adapts to be able to better cope with those demands in future. For this you can also rely on that tried-and-tested maxim of RPE (Rate of Perceived Exertion). However, it is now possible to be more exact, and work with specific incremental adaptations in a way that was previously impossible.

I use both the power meter and the HRM as described in previous articles. They are both incredibly useful tools for the above reasons and more. I'm just fascinated by the science. If you're new to training at this level you may want to test your fitness to determine training zones as many coaches recommend. However, since I've been doing this for years I know what my threshold and maximum heart rates are - to within a couple of beats - and I will have a fairly good idea of my Functional Threshold Power and other such measurements by the end of my first training block.

I don't tend to do much testing as I can generally monitor progress to a certain degree from the training rides, and to me the real test is a race anyway - you'll never push yourself that hard otherwise. If you're really into numbers, don't race, or work with a coach, there are plenty of good testing protocols out there.

Listen to your Body

So this block of training is where I get an idea of where I'm starting from. To do this I listen to my body to figure out how hard I can push it and make a note of what numbers that gives me. These days I think about my hard effort in relation to 4 benchmarks of intensity; it makes everything a little simpler. The first - and overall most important to most racers - is Threshold: the maximum pace I can keep for around an hour  - a 40k TT pace. Second is a 5-minute maximum pace: Anaerobic Endurance. The third is a 1-minute max. The last being a 5-second all-out sprint effort. It's not that I train only at these intensities - 90% of my training is below any of them - it's just that these represent clearly defined intensities that help me monitor my progression.

The human body is an incredible instrument. It can measure the amount of effort it can maintain for a perceived time-frame very accurately after a little training. In most people I'd suggest that it works fairly conservatively, and as I say we can achieve more when the chips are down, but for the longer durations, conservative is probably better since other factors like heat and hydration come into play. However, you won't improve unless you push through these perceived limitations.

I have a great little hill about 20km from where I live in Singapore that is a very quiet, dead-end road of around 400 meters with a relatively steady ascent at about 8-9%. Warming up on the way out there I might include a couple of 1-minute grinds just to get the body tuned to that sort of effort.

I make sure I'm spinning easily approaching the hill and get it into the right gear. Mostly in Singapore, the lightest gear I have is 39/21 anyway since 99% of the terrain is flat. So my lightest gear is fine for this - my cadence will be moderate (90ish) at the start of the climb but will drop below 70rpm as I get to the middle and I'm really grinding to the top.

My average wattage for these short climbs lasting from 1:04 to 1:12 is currently around the 400+ mark. I'm not watching the watts as I'm riding, but this will be a reference point later as I intend to base all my interval intensities on watts in subsequent training blocks.

After cresting the hill I will coast back down and then spin around the area for 4 minutes or so before going again. Once the effort outweighs the results I stop. I think the important thing here is to put your absolute max into these, regardless of how many you complete, and then spin home for a good recovery meal.

I have deliberately tried to pull the volume back a on what I would normally consider a minimum week of riding, so I'm riding 5 or sometimes even only 4 days a week, keeping easy days really easy (still enjoying the cycle paths!). My run is starting to develop a bit more of a groove and I'm starting to enjoy it. In my strength training workouts I'm including some new, standing core exercises and getting back into my kettlebell routine. After this first training block I felt pretty tired in the legs but relatively energised otherwise. I'm feeling strong now after a few days off and am ready to get back into it. Legs feel good.

I've just completed a 3-hour ride in the hills near my house in Malaysia to see how I feel overall, and I can notice an improvement in my core and upper body strength. This means I still feel strong towards the end of the ride, even after some hard climbing.

The next block will be a bit fragmented as I have a 4-day ride of long stages through some of the toughest mountain roads in the north of Thailand that happens right in the middle of it. Improvisation will be the key! As a jazz musician, I'm very good at that :)

The main drive of my plan is to come up with a method that is easy to maintain and doesn't reduce the enjoyment of riding my bike. I want to be able to improvise with scheduling hard/easy days according to how my body feels or to other commitments.

It may be age, but I'm getting more and more reluctant to compromise on my enjoyment of life, despite the fact that I would like to be a faster cyclist. I'm not a professional, so I have no interest in staring at a wall, hovering over an expanding pool of sweat on the home trainer, especially as I live in a tropical climate and can train all year round out on the roads.

The desire to reach a destination shouldn't obscure the enjoyment of the journey.


Nice informative article on the arguments for milk as recovery nutrition.