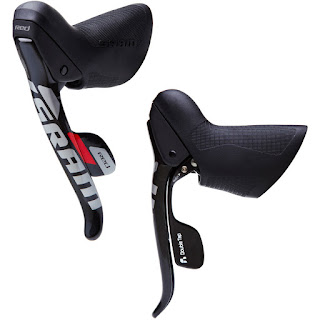 I remember when I first heard about SRAM road bike components around a decade ago. Rumours were rife that this relative newcomer American brand, then up-and-coming, would compete in a world that for years had only had 2 protagonists: Shimano for the modernists, and Campagnolo for the traditionalists. I had severe doubts that they'd survive long enough to establish themselves - let alone get their stuff to G2 stage. We'd seen so many attempts from even quite big players in the bike industry, but none had been able to hang in there, compete, or convince for long enough to break into the drive-chain component market.

At some point I realised that SRAM must actually not only have some serious stamina, but that they must also possess a truly worthy product. For survive they did. Now, if you look at what the pro cycling world uses, they sponsor many top teams, are probably the most aggressive innovators, and are very present as standard equipment on World Tour team rider's bikes, and that means a lot.

When I decided in 2013 to have a road bike built up that ticked all the boxes for me: top all-rounder frame, aero carbon clincher wheelset, power meter in the cranks, and top-end drive-chain components, my choice of groupset for the build involved a leap of faith - a (calculated) risk.

Having used pretty much exclusively Shimano components since starting my love affair with bicycles in the late '80s, I was tempted to try SRAM by the promises of lighter weight, slightly better pricing (at the time) and favourable reports from trusted fellow riders.

I opted for the 10-speed SRAM Red groupset, even though 11-speed was widely available by then. This was due to a few considerations: a) 10-speed chains were still a bit more robust than 11-speed; b) I could find replacements for maintenance more easily where I live/ride; c) I do a lot of long rides into places where I would be hard-pressed to find anything more cutting-edge if something went wrong. 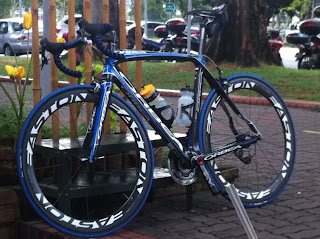 My initial responses to riding with the new groupset were favourable. The shifting is precise, and easy to adjust. The actuation of the shifters with their "double-tap" system felt very intuitive to me and took almost no time to get used to. The routing system on the rear derailleur is particularly well-designed, and the front derailleur, with it's "yaw" system makes for a good, smooth change on the chainrings, plus the chain-catcher that comes with it is effective and easy to install and adjust, and means you are unlikely to drop the chain inwards off the small ring. I'm using elliptical chainrings, and these could be difficult for a front derailleur to handle smoothly, but I've had no issues.

The ergonomics of the shifters makes them comfortable, at least for a normal-sized male hand, and the reach from the drops is naturally closer than my previous Dura Ace setup. I also like the fact that the main lever of the brakes does not move side-to-side, which makes braking more secure - one of the few issues I have with the Shimano system. This made riding in the drops a much more confidence-inspiring experience, and has been part of my metamorphosis into a demon descender.

The single paddle shifter works by moving the chain incrementally up the cassette/crankset onto the larger sprockets/rings with a series of strong single pushes (against the spring) on the shifter, and back down the cassette/crankset with a single, or series of, shorter pushes or "taps" (releasing the spring). It quickly becomes natural. You can do multiple shifts in both directions easily once you get the hang of it. 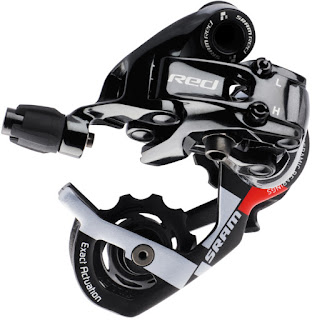 My only bone of contention with the shifting system is that when the rear derailleur gets to the bottom gear - or largest sprocket - and you happen to try to shift further, it shifts back up (ie: releases the spring back across the cassette to the second sprocket). This can be extremely annoying if you're on a tough climb, looking for another easier gear (which you don't have), and instead you shift back down to a harder gear. It can really wreck your rhythm.

SRAM have actually improved on this mechanism, as I discovered with my, more recently acquired, 2015 11-speed Force system - which I will write about separately. It now pushes through when you "bottom-out" and the chain stays where it is. So suffice to say that this is now a redundant criticism, but if you do happen to pick up an old 10-speed system, you'll have to get used to this feature.

The brake calipers are excellent - really strong and reliable actuation, easily as good as the Dura Ace, as are the SRAM pads. Again, this gives you a great feeling of control, and more willingness to let go when you need to.

I can't vouch for the cranks as I didn't use them, choosing instead a set of Rotor 3D+ cranks with a  Power2max power meter spider. All completely compatible and excellently matched.

So now, after putting in over 10,000km to the bike, I can assess how this groupset has held up against all the other ones I've used.

I like the SRAM chains with their master-link system, and have used them pretty exclusively over the past couple of years. I keep my chains pretty clean and change them regularly, so cassettes and chainrings haven't worn excessively. However, I recently replaced one of the jockey wheels in the RD as it was almost toothless. The often wet conditions I ride in do mean that a lot of stuff gets thrown up around the back wheel. I couldn't find a SRAM jockey wheel replacement easily so I used another brand. Again, SRAM's state of permanence in the market is clearly evident when all replacement parts now come in 3 options.

Another great in-built feature is that SRAM have designed all their components to be entirely compatible with the ubiquitous Shimano system that means all wheelsets, chainrings, cassettes and chains built for one, work with the other. I haven't had to throw any still-useful bits away.

I think the bike has probably had so far 3 changes of cable in it's time, and the barrel adjuster for fine-tuning cable length on the FD cable housing (which is a necessary item if you want your FD to shift accurately) is a bit loose and should be replaced soon. The shifters do get a little stiff and need lubrication from time to time, so I think a bit of a clean and lube with each cable change is probably in order - will have to remember on the next one...

Aside from that, really nothing to report. The fact that I built up another bike last year, using an 11-speed SRAM drive-chain, speaks volumes. My next bike will most likely have disc brakes, possibly hydraulic, and I can't at this point see any reason that I wouldn't again choose to use SRAM for the brakes and the drive-chain, but that's another story for a future post.
Posted by Cafe Rider at 6:04 AM No comments:

The Inner Battle of The Ultra Endurance Athlete


I was watching this interview with a guy who finished 4th in the grueling Transcontinental Race, a sub-10-day unsupported ride from Flanders to Istanbul (after coming down with bronchitis on day 1!).

Even though he was obviously very focused on the competition, he does say something about every day being a competition against yourself, and it made me think: actually all of these ultra-endurance events are a competition between the best parts of yourself, and the worst parts: an inner fight between light and dark.

Your angels against your demons.

Some of us just need to work that hard for our self-esteem!

It goes a long way to explaining the "why?" that is so often leveled at us endurance-junkies by people who can never imagine challenging themselves in this way.