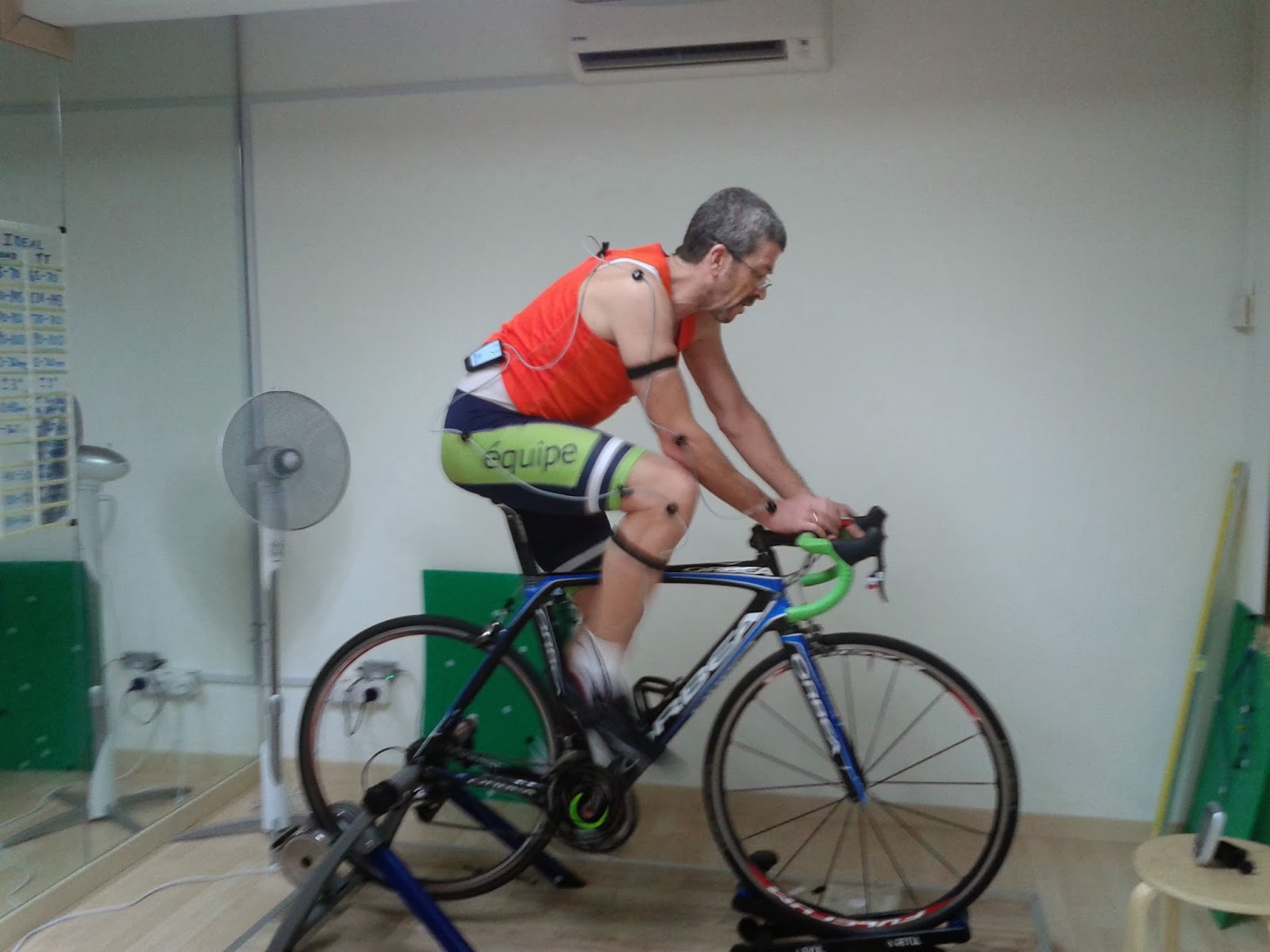 A couple of weeks back I had a bike fit done in Kuala Lumpur by a company called VO2 Max run by old friend Patrick Potvin, a Canadian Sports Scientist - also an excellent cyclist and triathlete - who originally came to Malaysia to work with the National Sport Centre testing and training the national cycling squad. He subsequently married a local, settled down (familiar story), and moved on from his position at the NSC to set up his own coaching and testing operation. He's really quite a rare gem to have in this part of the world. He runs it in a suburb of KL in partnership with (and above) a shop called Cycle Studios. 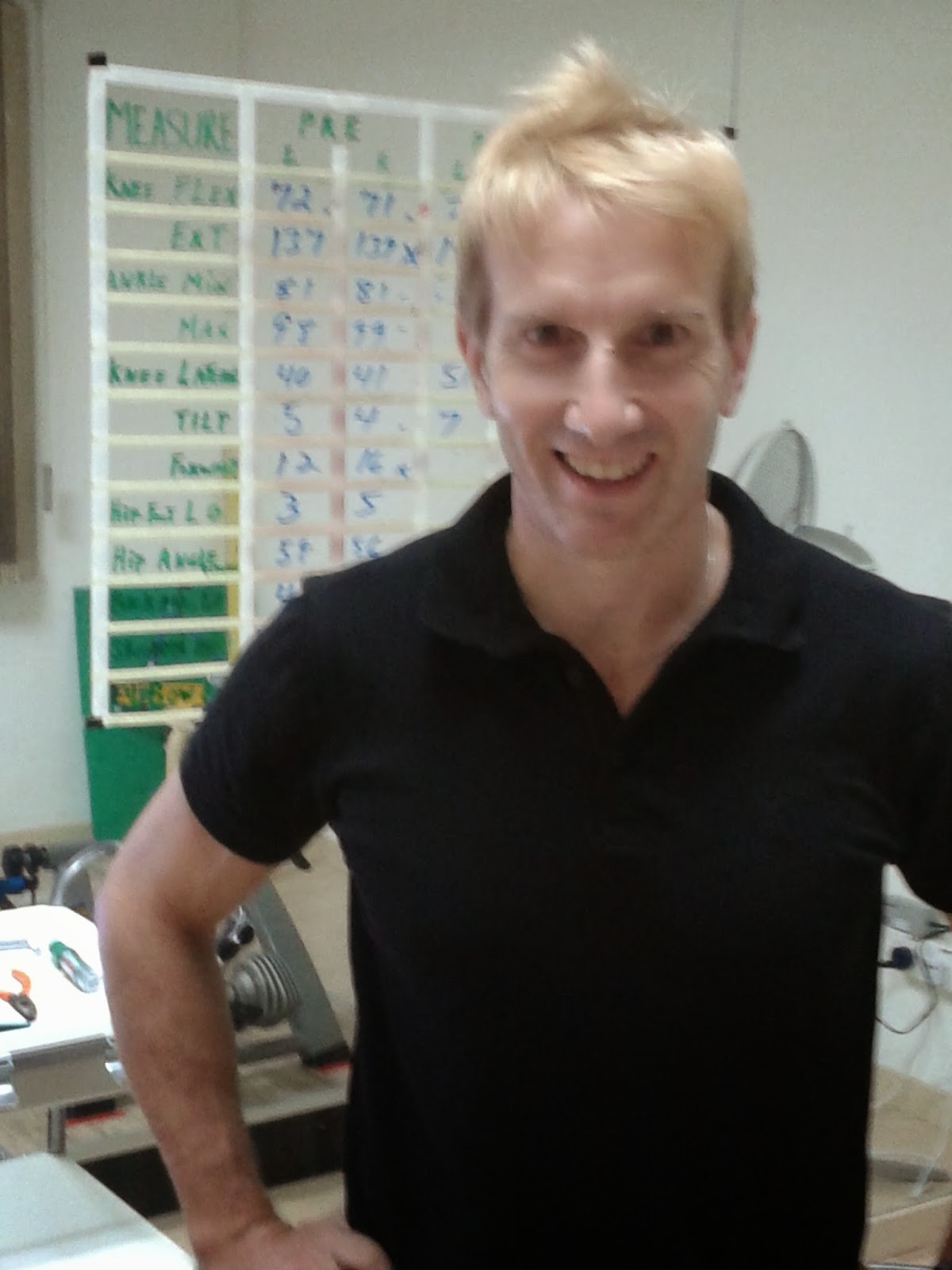 So I've been cycling for a few decades now. Why would a bike fit be of use to me? Surely I should have ironed-out an effective riding position that would make this sort of thing redundant by now.

Well yes...and no. I didn't expect any massive changes (and nor did Pat), but I did want to make sure I was getting an optimal transfer of power, and also iron out the occasional niggles that would occur sometimes on long rides. The tiniest shift in anything on a bike can affect the ride quality and cause us to use the wrong muscles to compensate for something that may have us wasting energy or developing strain injuries gradually. Plus I'd heard rave reports from other highly respected and experienced riders who had been re-fitted by Pat. 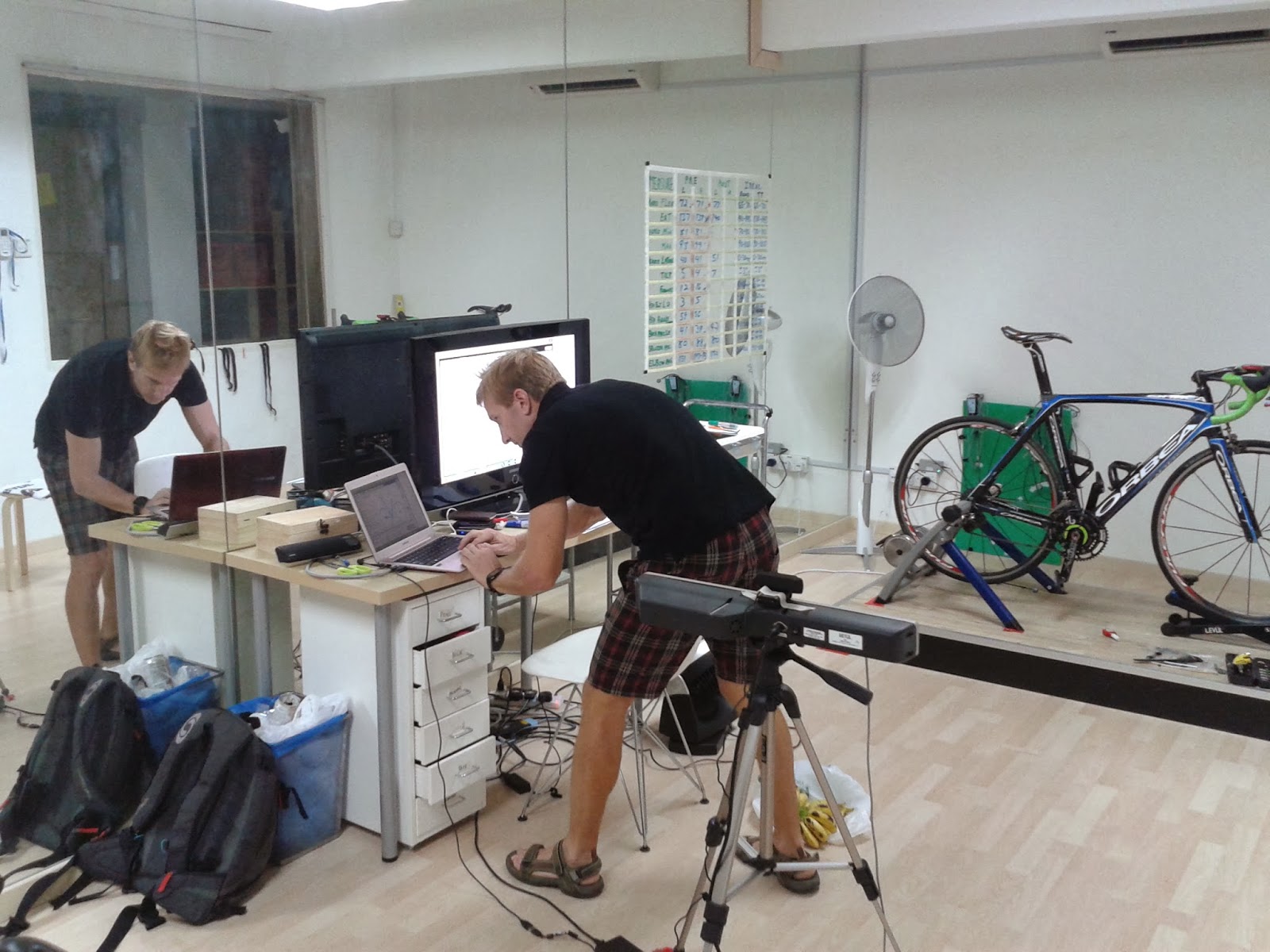 He's using the Retul system of bike fit which seems to be one of the most trusted ones around.  It's a tool - as always it's down to who's using the tool that is important, and I really trust Pat's experience and understanding of the science. In the info pack he sent through was a list of the stuff I should bring - basically bike, shoes and bibshorts plus a towel. 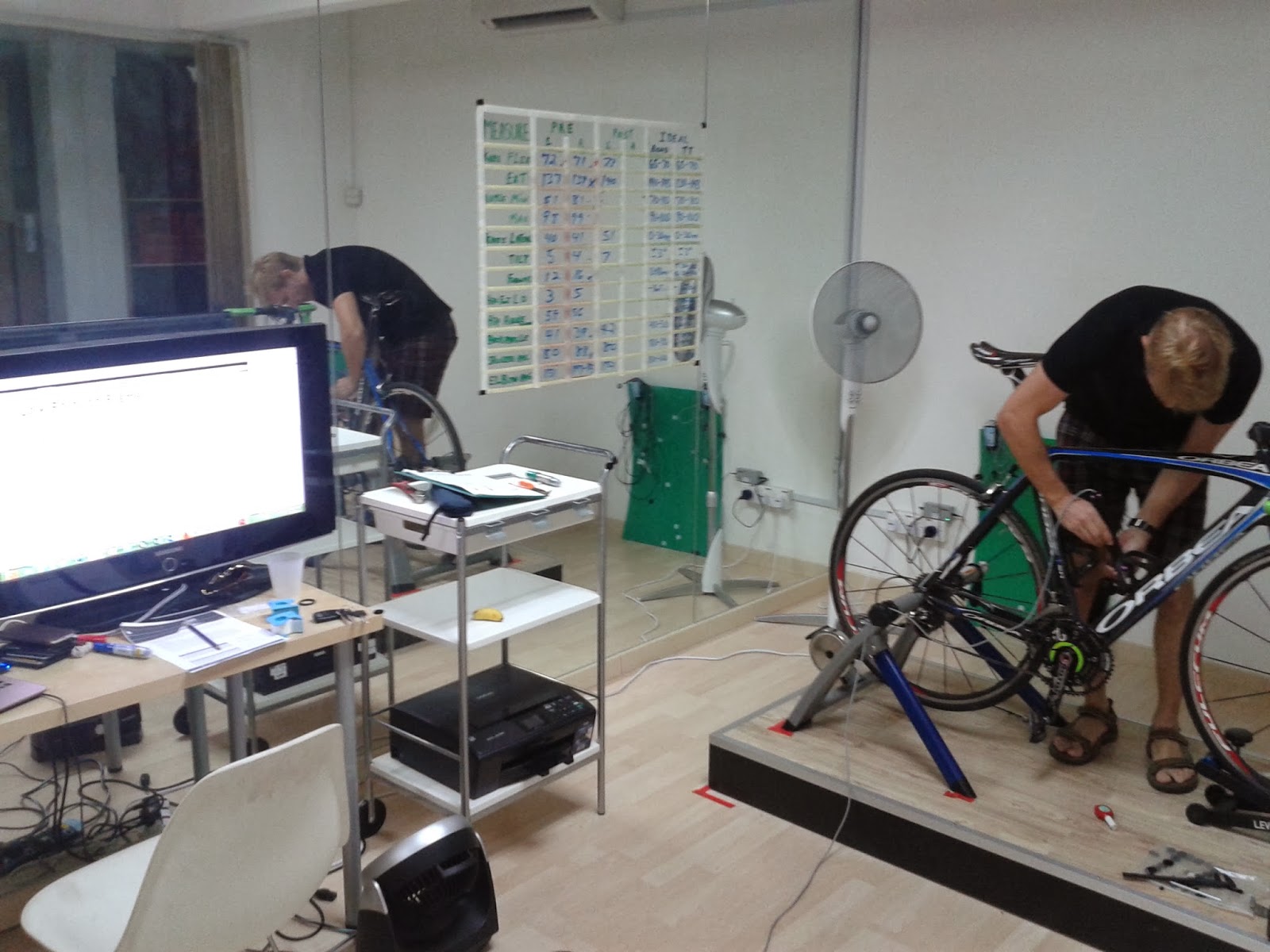 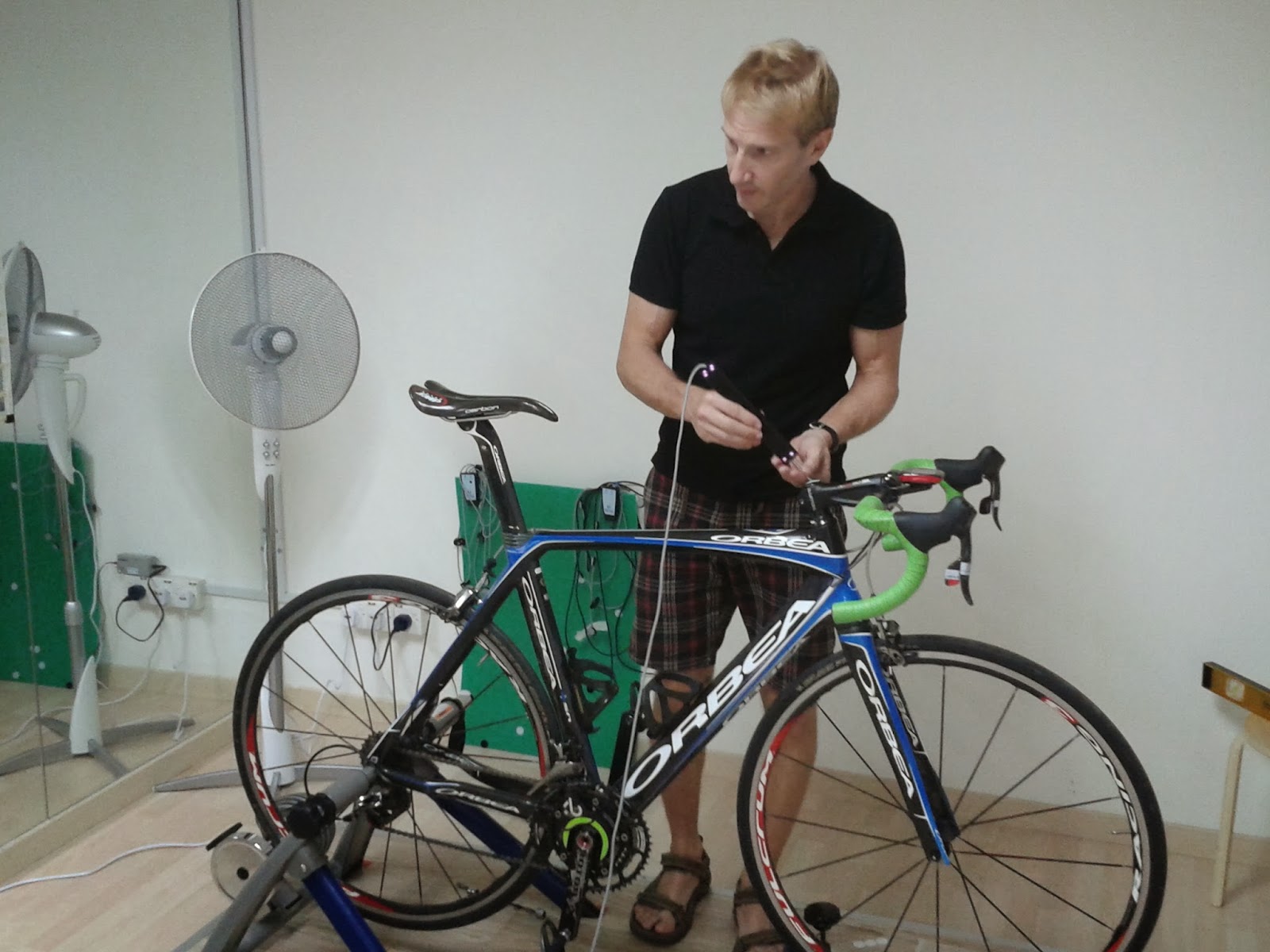 Next he made an assessment of me physically - usual stuff first: weight, height, inseam etc. He then tested me for flexibility and symmetry. This from his assessment:

"A mobility and functional assessment showed good hamstring and lower back flexibility. Hip mobility however is restricted somewhat especially on the right side with internal and external rotation. You left shoulder inernal rotation is slightly restricted compared to the right. Your stability and balance on one foot could use improvement as you display quite a bit of foot,hip and torso movement when doing single leg quarter squats, a clear sign of lack of muscular control of the lower limbs and feet. You walk pretty straight on your toes with feet pointed a bit outward, Your hips are uneven when standing and lying down, with your right side being higher than the left. You also possess a noticeable leg length discrepency with the left leg appearing longer at the ankle and thigh. This could be the result of a rotated or shifted pelvis on the left side and not necessarily a true limb length difference. Your feet are pronated (low arches), left more than right and both your forefeet are flat (no in/outward tilt). These findings are considered when fitting you properly to your bike."

Whew! Lots to work on there!

The fit included a check of the cleat position on my shoes which he did next, finding that they were about 5mm forward of where they should be for proper power-transfer. I'd been cycling on my toes! 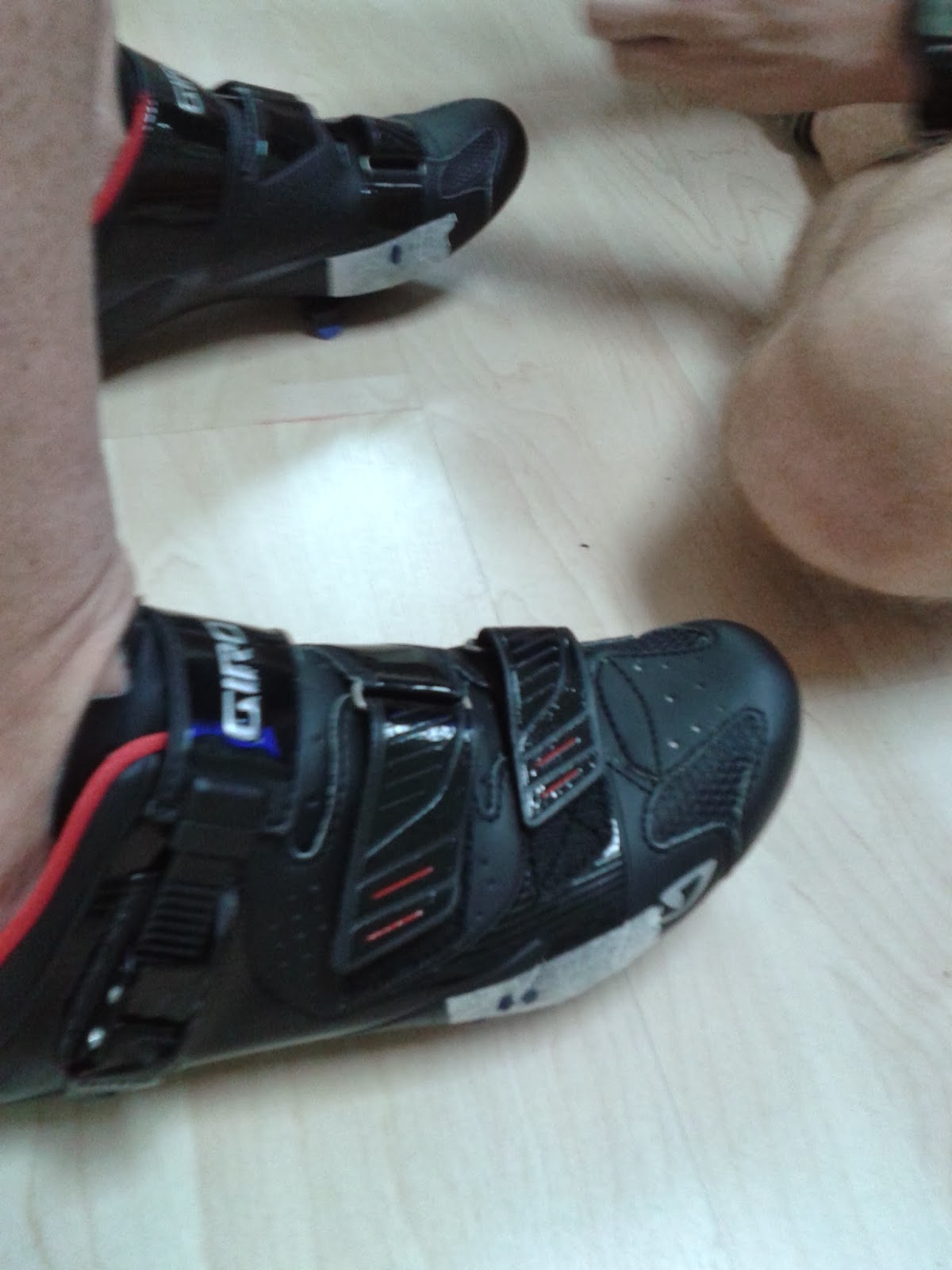 Once he'd repositioned the cleats, he wired me up with the sensors that would be picked up by the program to locate me in relation to the mapped points of the bike. Now it was time to get on the bike and warm up. I could already feel the difference in the slight shift of the cleats - feeling that my foot had more contact with the pedals. 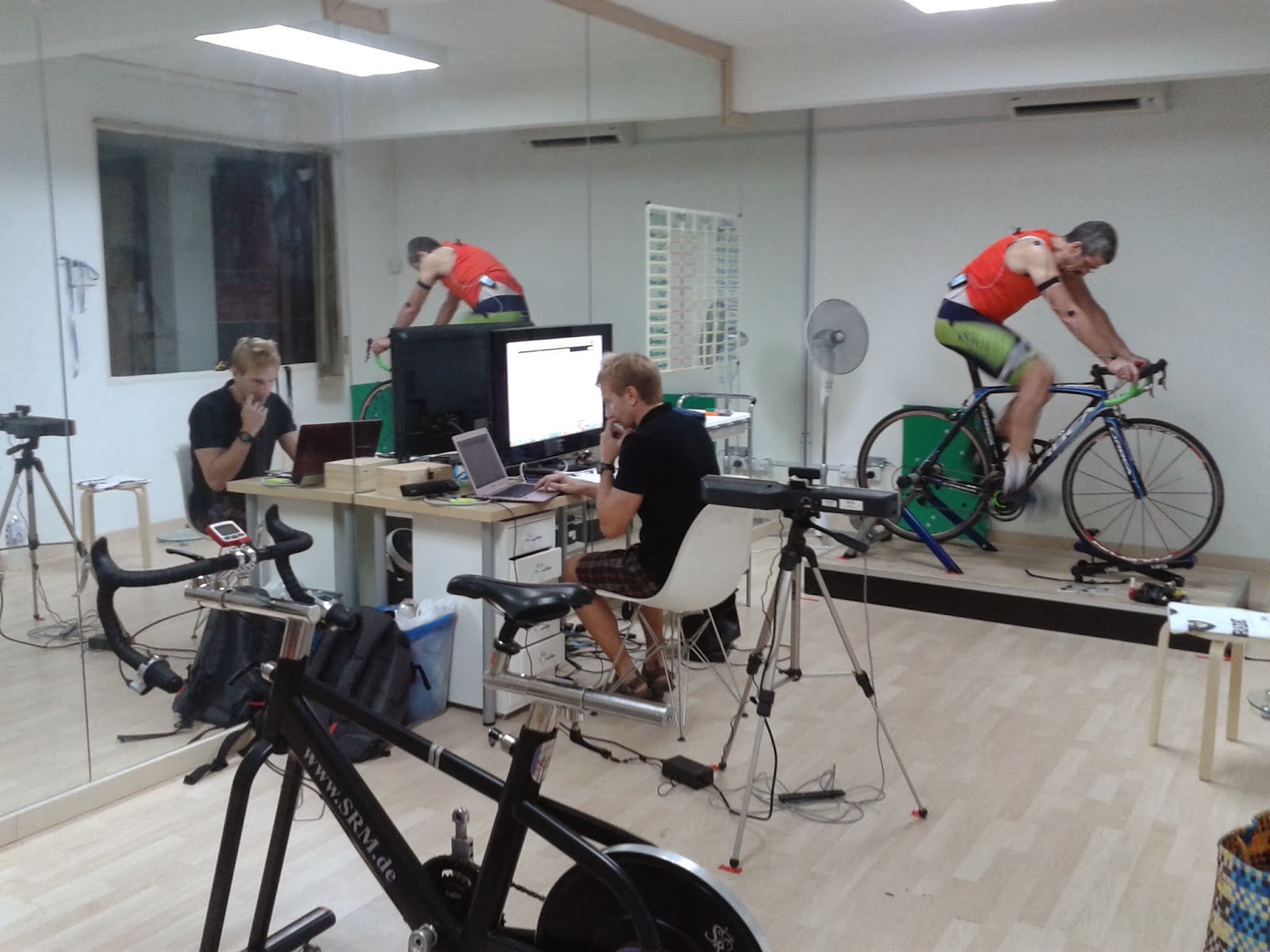 After a warm-up he asked me to keep a constant output of 180w for a short period, and then at 220w for another couple of minutes. Once the computer had picked up the relevant information from these 2 effort zones I rested while Pat extracted it's findings for assessment. He then patiently explained the optimum angle ranges in great detail and pointed out where my own position would need adjustment. Before I got off he asked me to take my hands off the bars while pedaling in the drops. Perhaps predictably my balance was off and I couldn't hold the position for long. 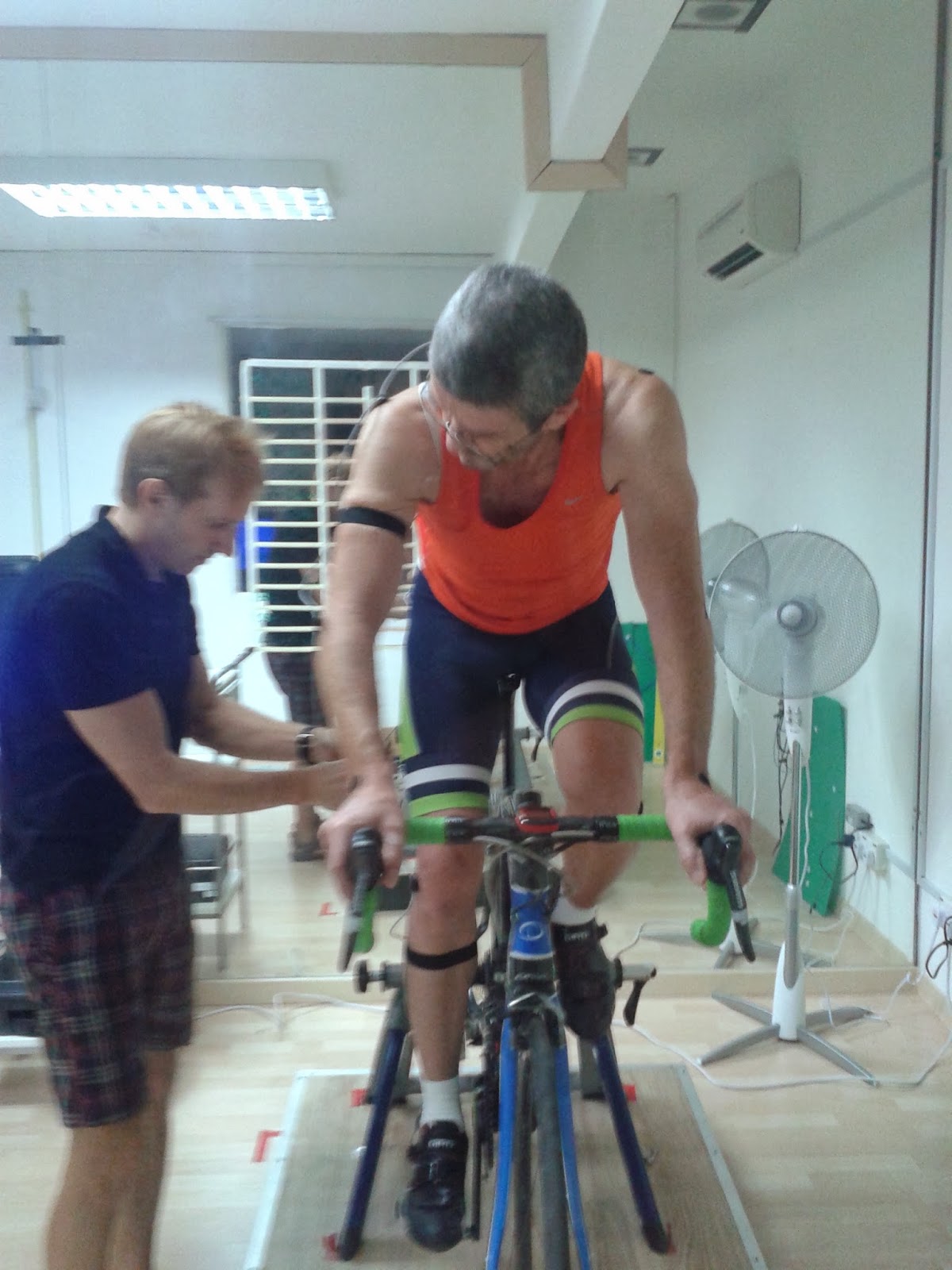 The outcome of all this was that my saddle should not only come up and back, but should have the nose tilted up more. Bars also up by about 1cm. Pat set about shifting all these things around.

After the adjustments had been done, we went through the same process again of riding through the required power zones to assess efficiency compared to the previous test. The computer showed a definite improvement and my position was now falling within the prescribed parameters. It felt comfortable to me, and perhaps a little more effective - though that may have been a little wishful thinking at this point. 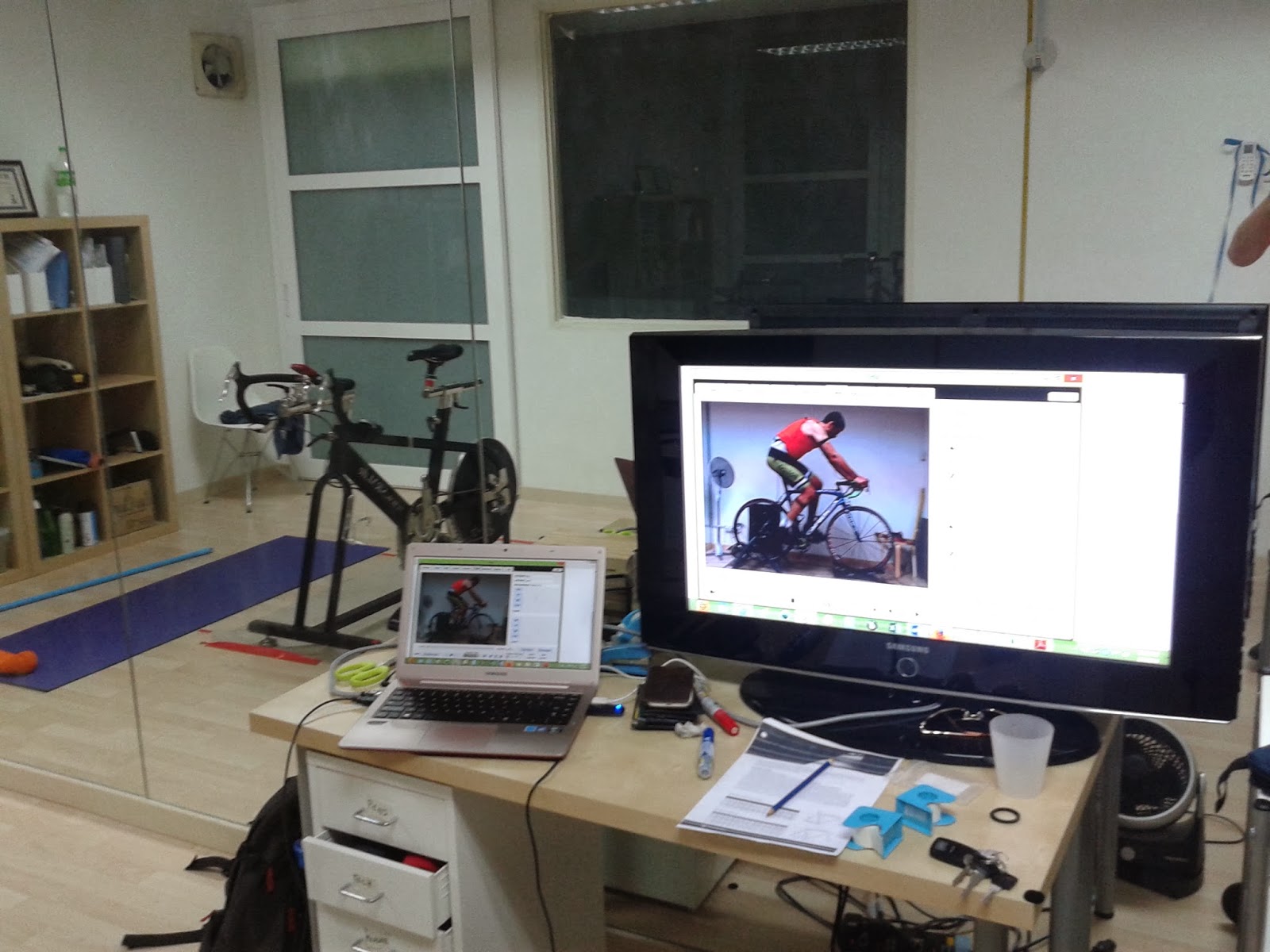 The whole session took about 3 hours - all completely fascinating to me, and time well spent I think. The real test would be whether the position continued to feel comfortable on subsequent rides, and if it enabled me to produce more power.

Obviously, outside the lab - even with a power meter - one can't be entirely objective about the difference in a short space of time, especially as I've had a rather fragmented riding schedule since then. But it does seem to be giving me better power results, and my ability to engage my core comfortably into a smooth pedal stroke is definitely improving. I'm happy.

At least now I know if there are any shortcomings in my performance as a cyclist, there are no excuses relating to the gear I'm using; it's purely down to me to improve myself!

For more information and to contact Patrick for a booking get in touch at info@vo2maxt2r.com.
Posted by Cafe Rider at 12:19 AM 3 comments: