Fraser's Loop - All The Way In A Day 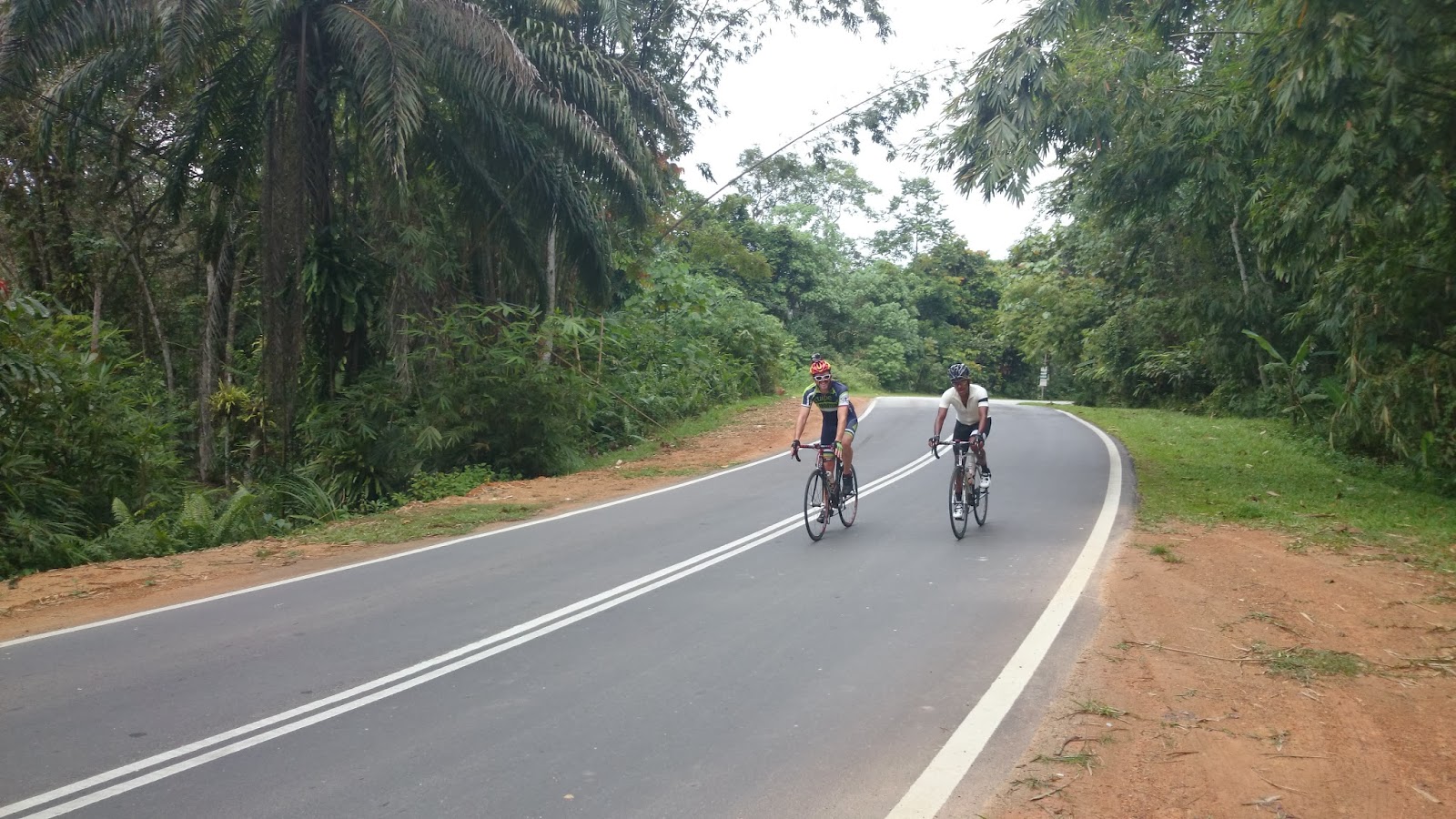 We just completed a fantastic little epic Sunday ride as part of one of our weekends out of Kuala Lumpur. This was the complete loop from KL out to the historic colonial hill station of Fraser's Hill and back again. This amounts to 200 kilometers of riding, and a journey we usually make in 2 days with an overnight in Fraser's for a cool break from the Malaysian heat. No cool break this time, but the weather could not have been more perfect, with cloud cover and a cool northern breeze on us all day. 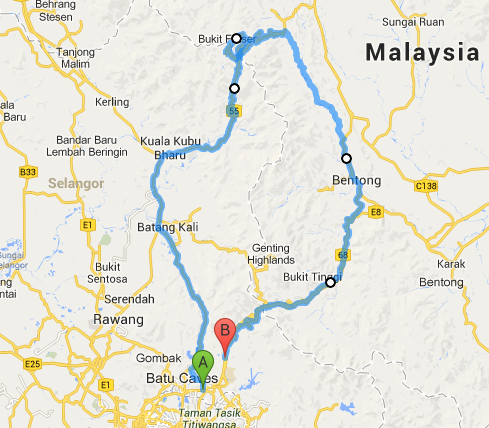 My fellow adventurers on this day were a small but powerful collection of my best riding buddies and staunchest Equipe Nomad regulars - which also contributed massively to the memorable day.

Clarence Tang flew in from Hong Kong on the Thursday for some good carbo-loading and a warmup ride through the idyllic roads of Genting Sempah and Janda Baik. My longest-serving riding companion Jim Bryan also joined us on this ride.

The following day the group was amplified further by the welcome addition of Jarno Lamsa - the Flying Finn - and we did a ride Jim calls the "Hard 100" through the consecutive climbs that make up a 100km out-and-back from Ampang southwards into Negeri Sembilan. 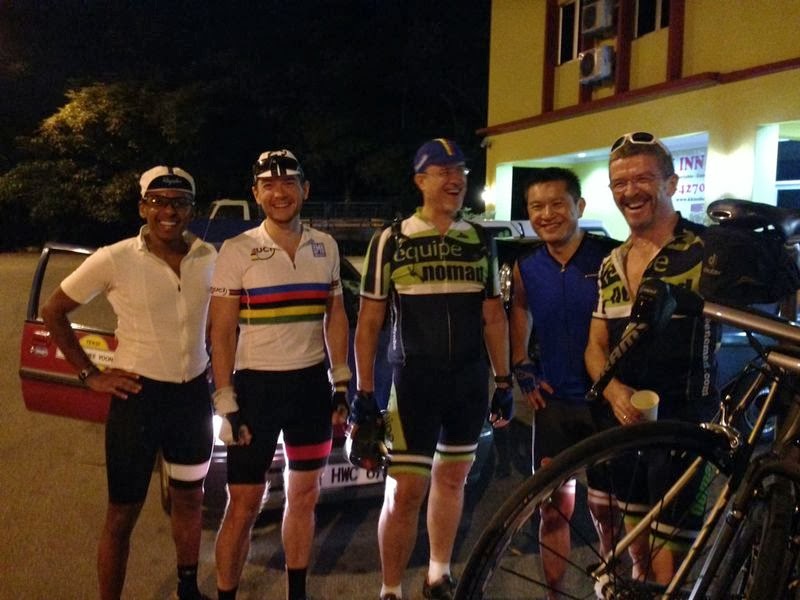 All of this is just warmup of course. On the Sunday we were once again expanded by the addition of fellow Equipe Nomad think-tanker Rueban Balasubramaniam. This day would be all about pacing. In a group with fairly varied abilities (degrees of extra padding actually!), it meant that the hills would split us up, with each person staying within their comfort zone in order to complete the task.

We started at the break of dawn rolling out of the Klang Valley directly up a 12+% ramp within the first 3km past Batu Dam and around the reservoir, cresting another lump at 400m about 18km into the ride after a steady 3km at 5-6%. Thereafter down the fastest descent of the day (76kph recorded) down to the town of Ulu Yam, where we would re-group so that we could ride the short section of main KL-Ipoh road as a group with vehicle protection. 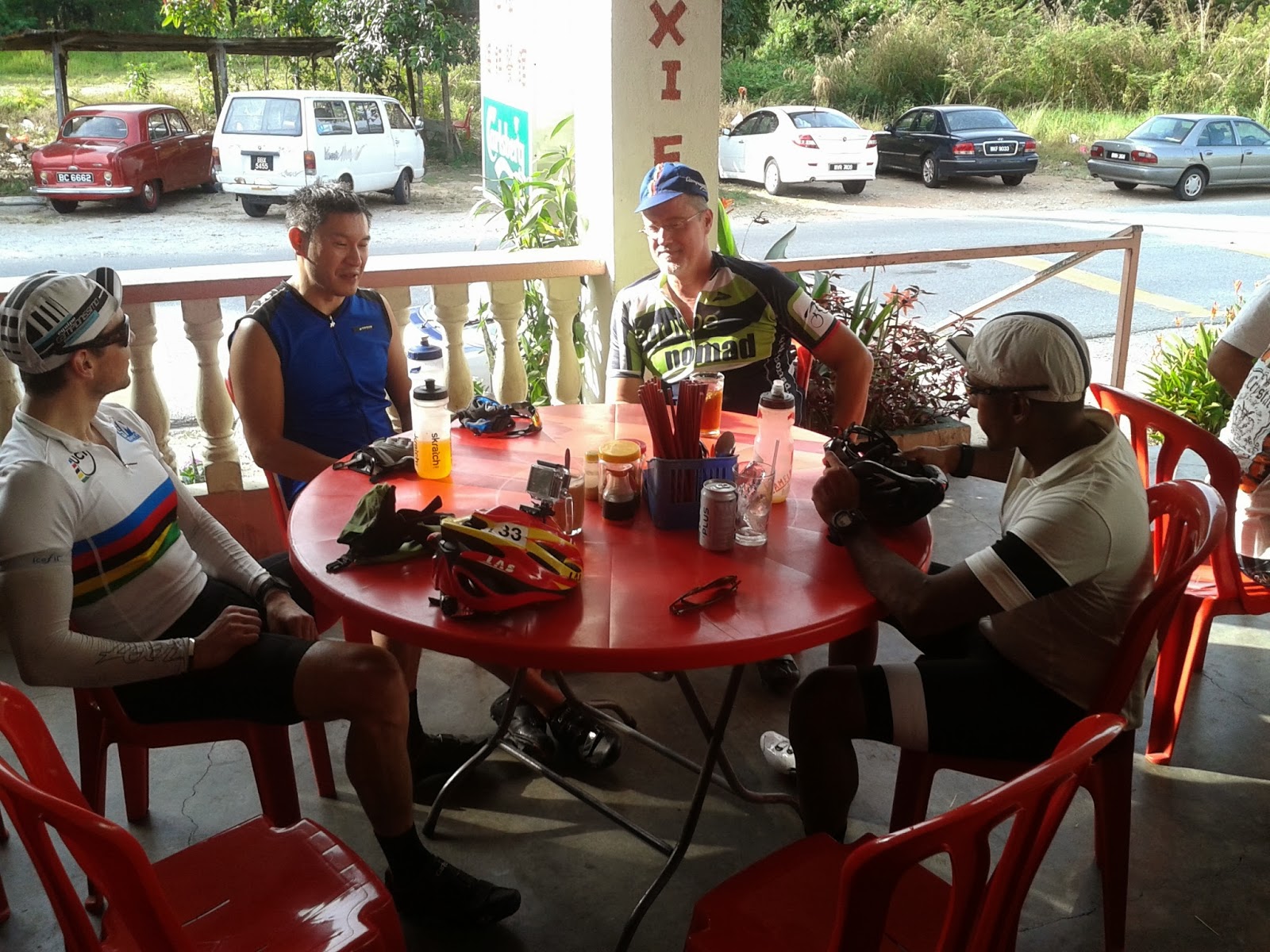 First food stop at around the 50km mark in Kuala Kubu Bharu.

After this the road rises for the next 40km up to Fraser's Hill at an altitude of 1200m. The first section passes another dam and reservoir on wide straight roads before gradually morphing into a long winding ascent at a 3-4% average. The last 8km to the top is the more challenging climbing of the day, with many sections at 8-9% on a beautiful road with one-way traffic. The descent of this section is equally stunning though slightly more gradual - and also unidirectional which makes for stress-free cornering. 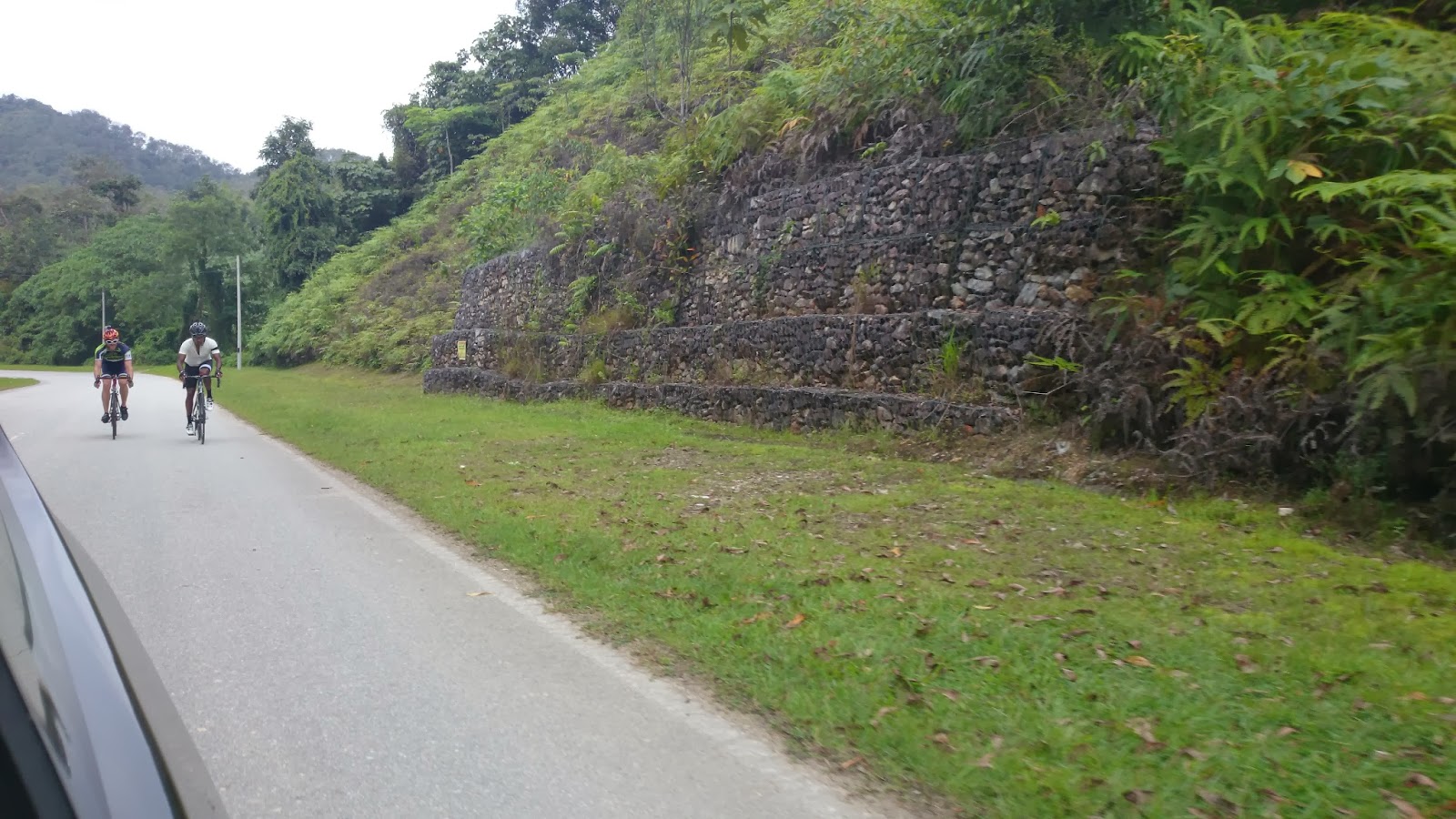 At this point we had our only real mishap of the day as Jarno's carbon handlebars developed an alarming flexibility all of a sudden on the descent. Luckily he managed to steer his way to the foot of the climb. The carbon had cracked directly under the clamp for the right lever suggesting that whoever had put the levers on had over-tightened the clamp and the carbon had eventually failed. No way around that one so it meant that Jarno's ride was over. 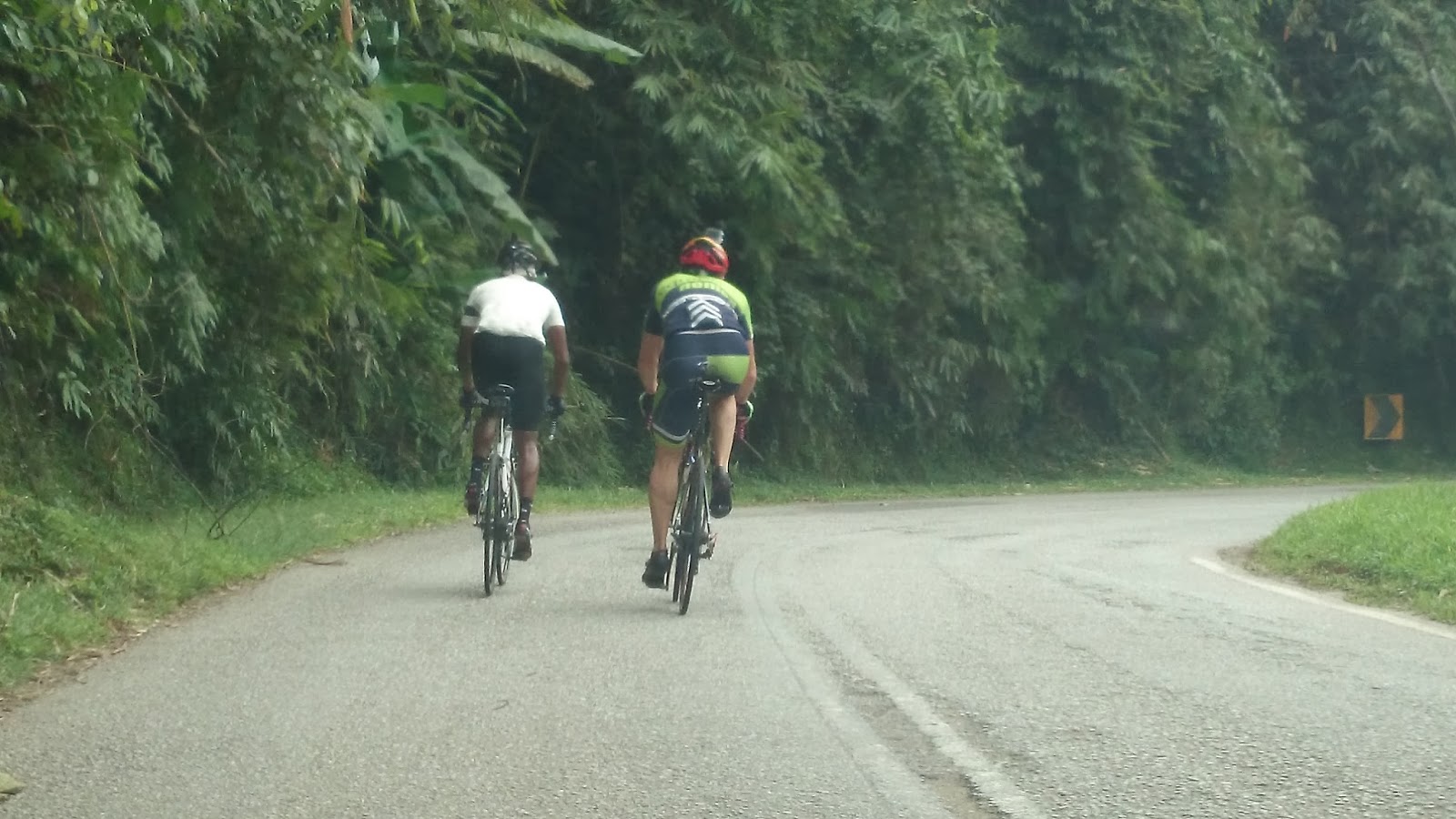 Not one to dwell on his misfortunes, he decided to assume the role of our head coach Gunther Von Agony and yell encouragement (albeit of a slightly sadistic nature) at us from the car. The rest of us made relatively short work of the remaining 22km descent and subsequent 20-something km rolling through to the second main road section of the day and a re-grouping for the paceline. 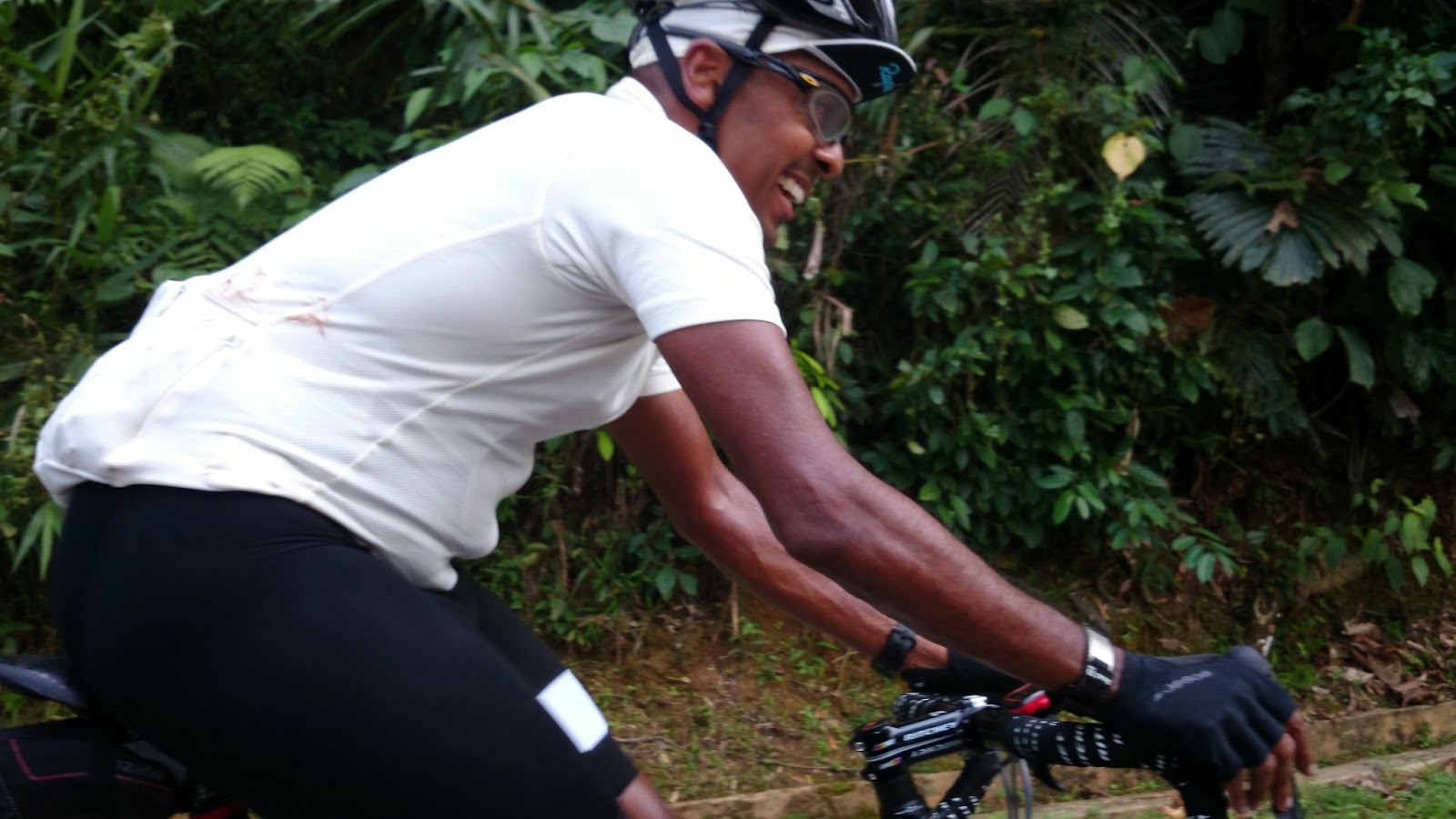 The highlight of hitting the town of Bentong at this point in the day is that the famed restaurant serving up Cendol (a Malaysian dessert made with ice, tapioca flour and coconut milk) and Yong Tau Foo (google it), is in full swing. That became the venue for the final feast before the last onslaught back towards Kuala Lumpur. 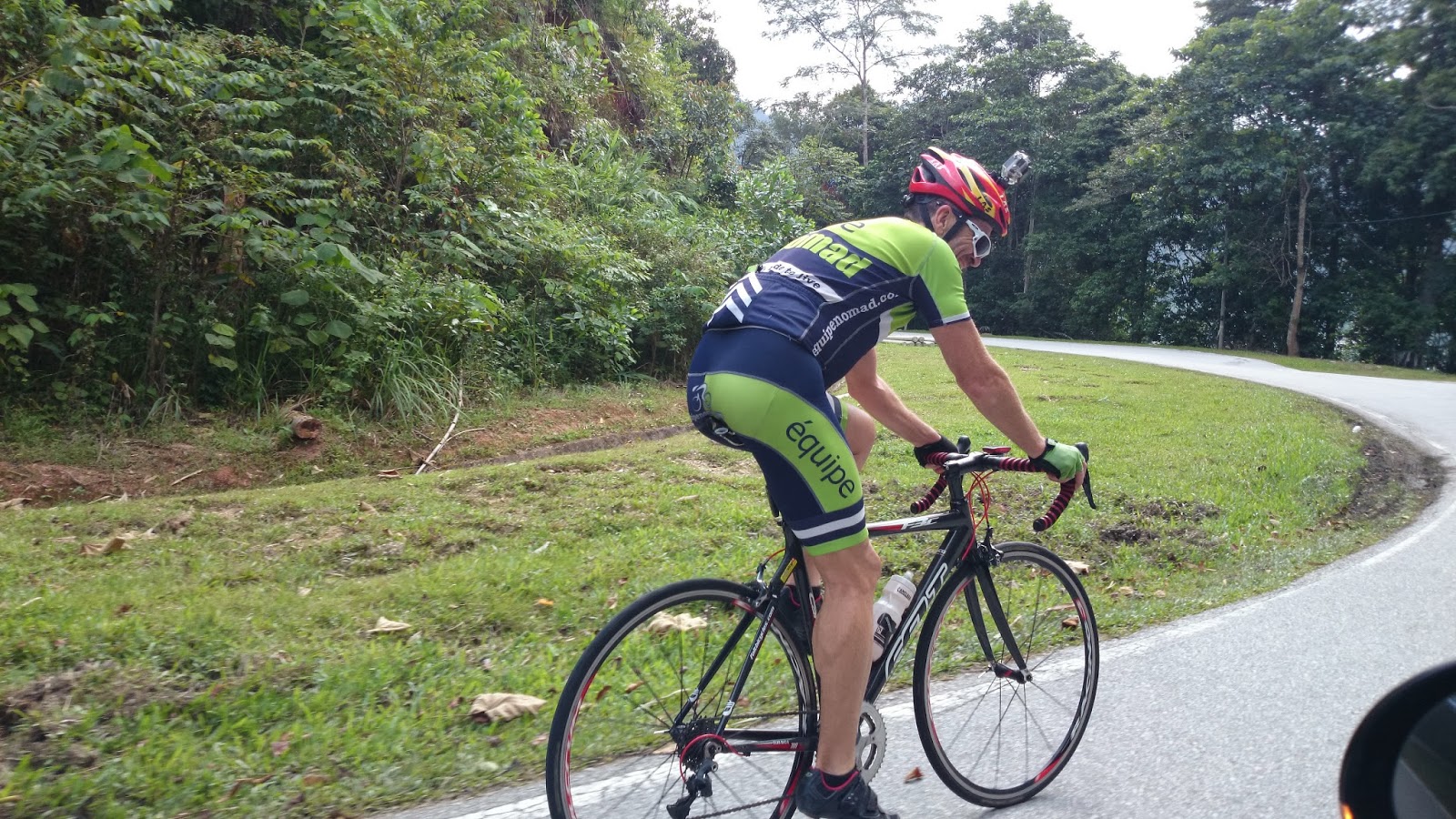 Once out of Bentong the roads resume their quietly serene nature and, refueled with some good carbs, we hammered along the rolling section to the start of the climb up to Genting Sempah, after which it was down to individual focuses once again. The climb is a fairly steady 3-4% once again with only the last 2km ramping up gradually to the final section which is the last kilometer to the peak hitting some 15% moments near the top. 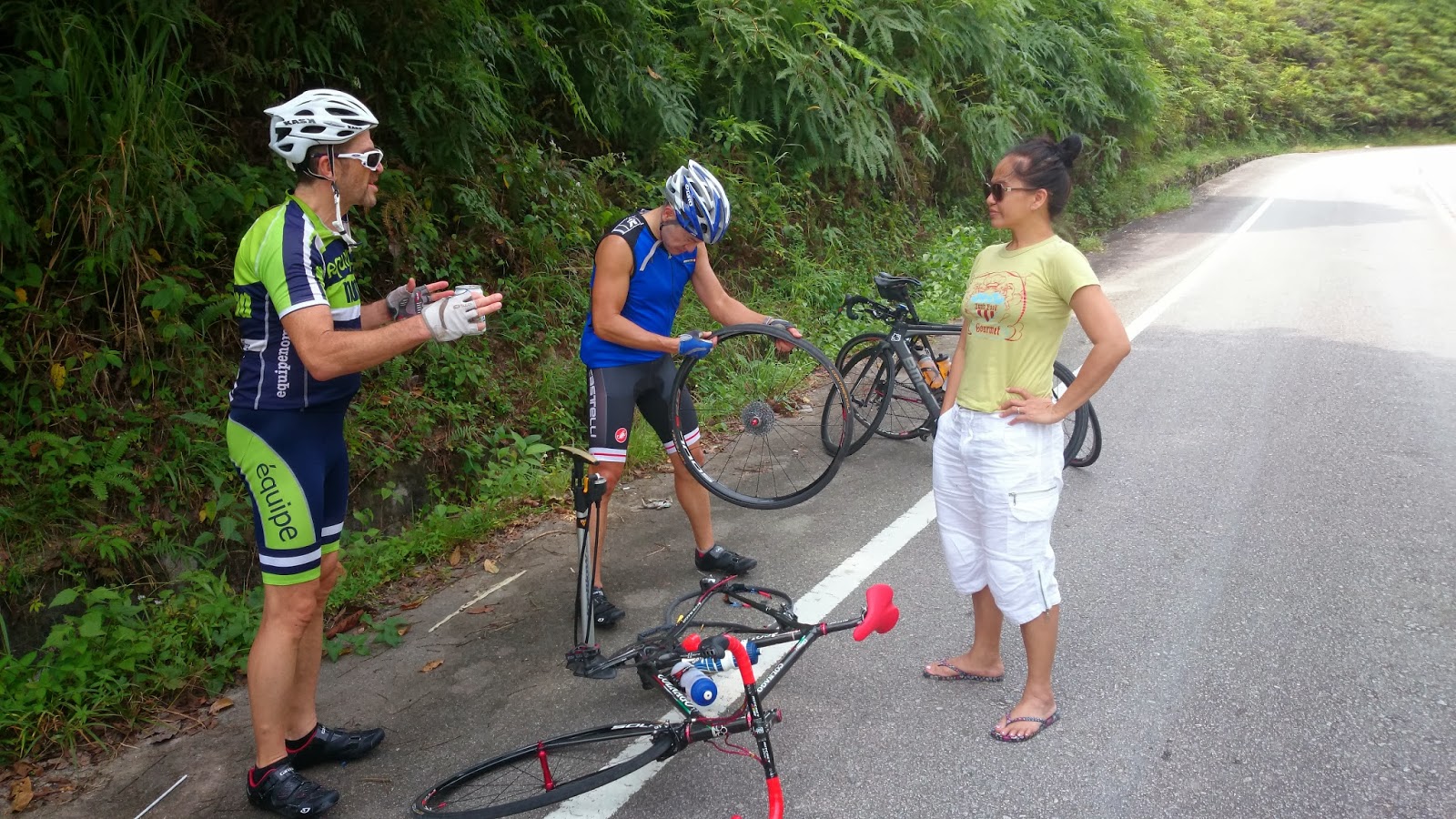 This was now payback time, with all the hard stuff done, and just an exhilarating 15km descent through lush jungle to the foot of the hill and the end of the ride.

Watch a video summary of the ride. 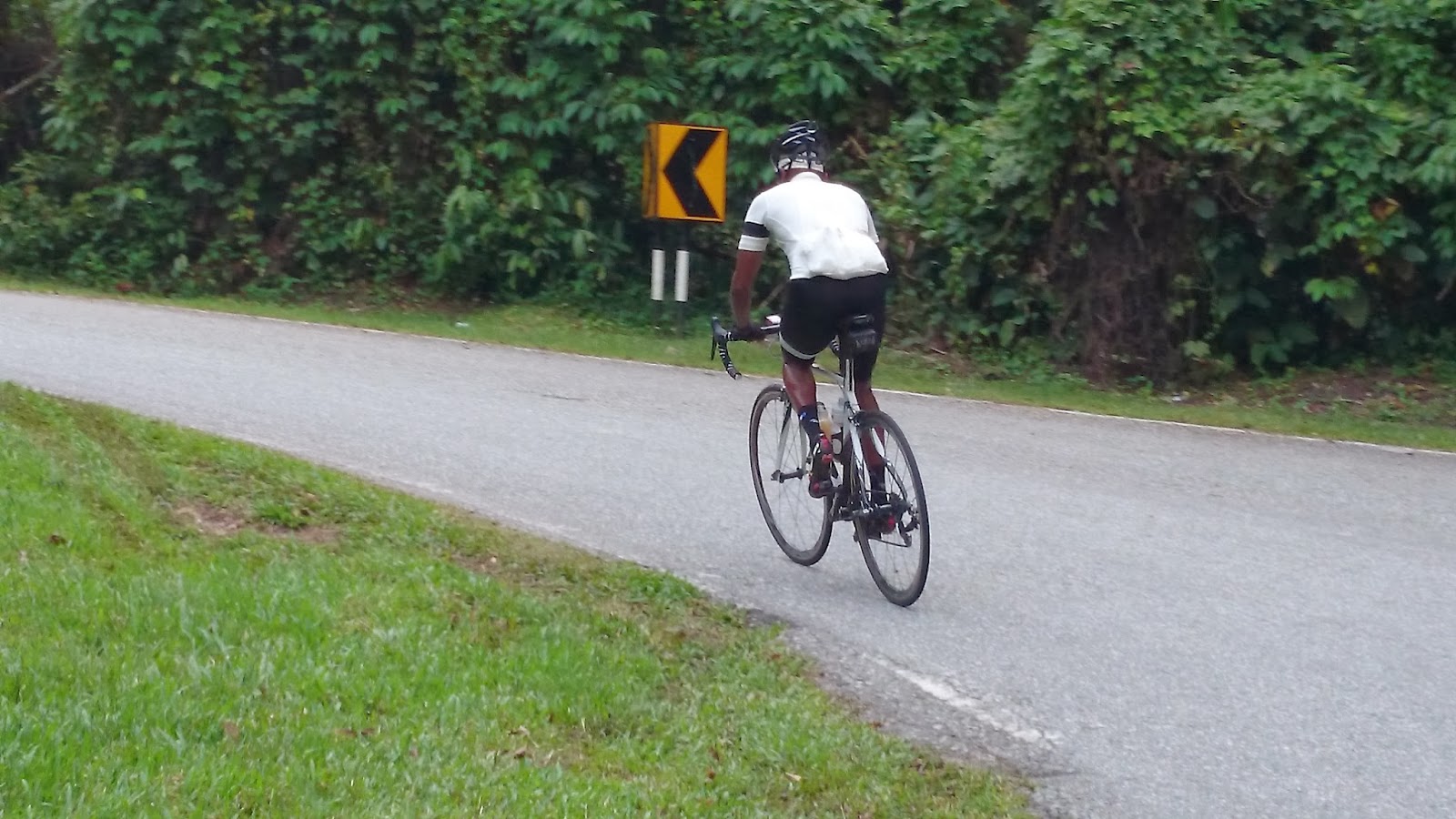 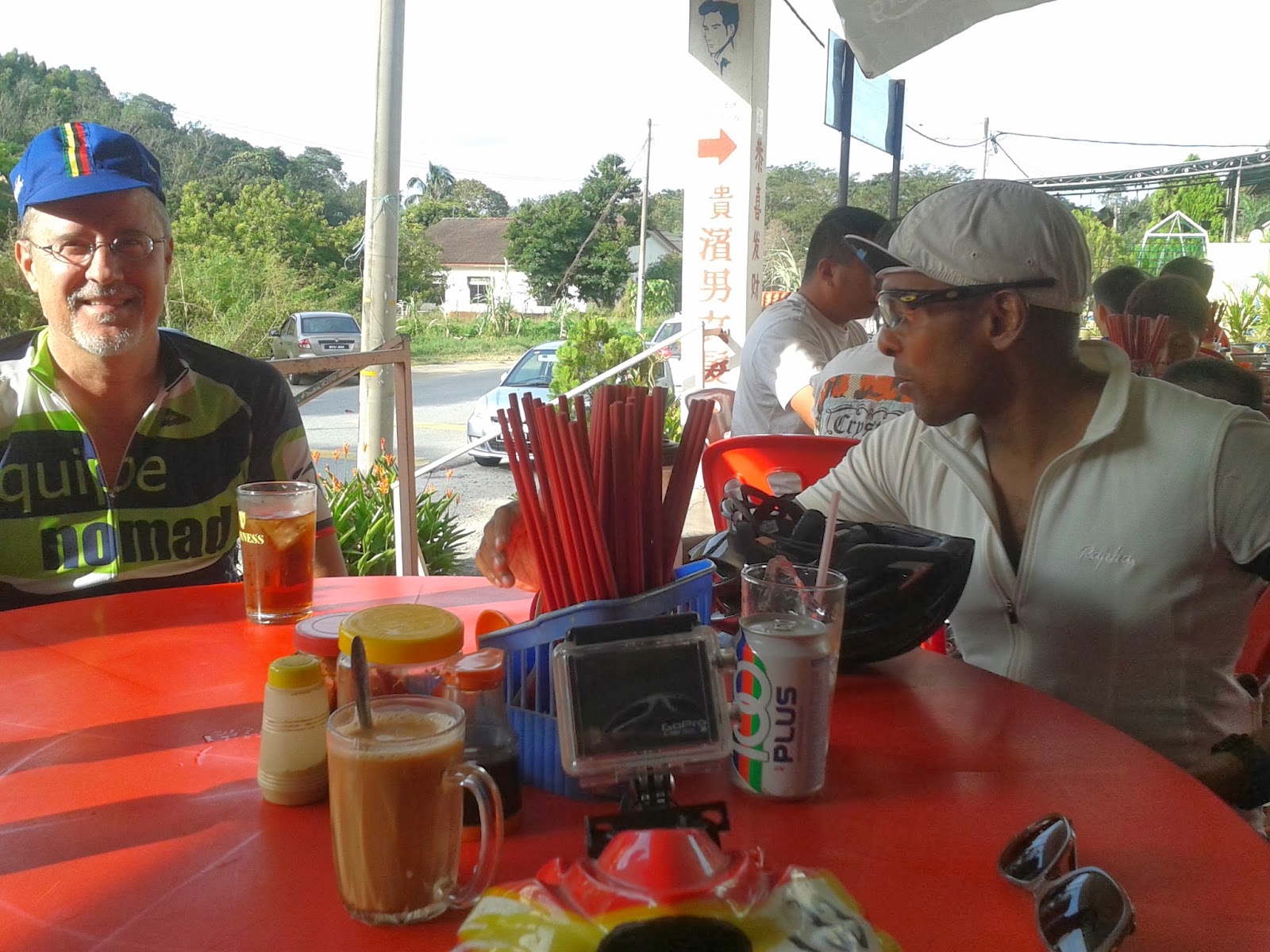 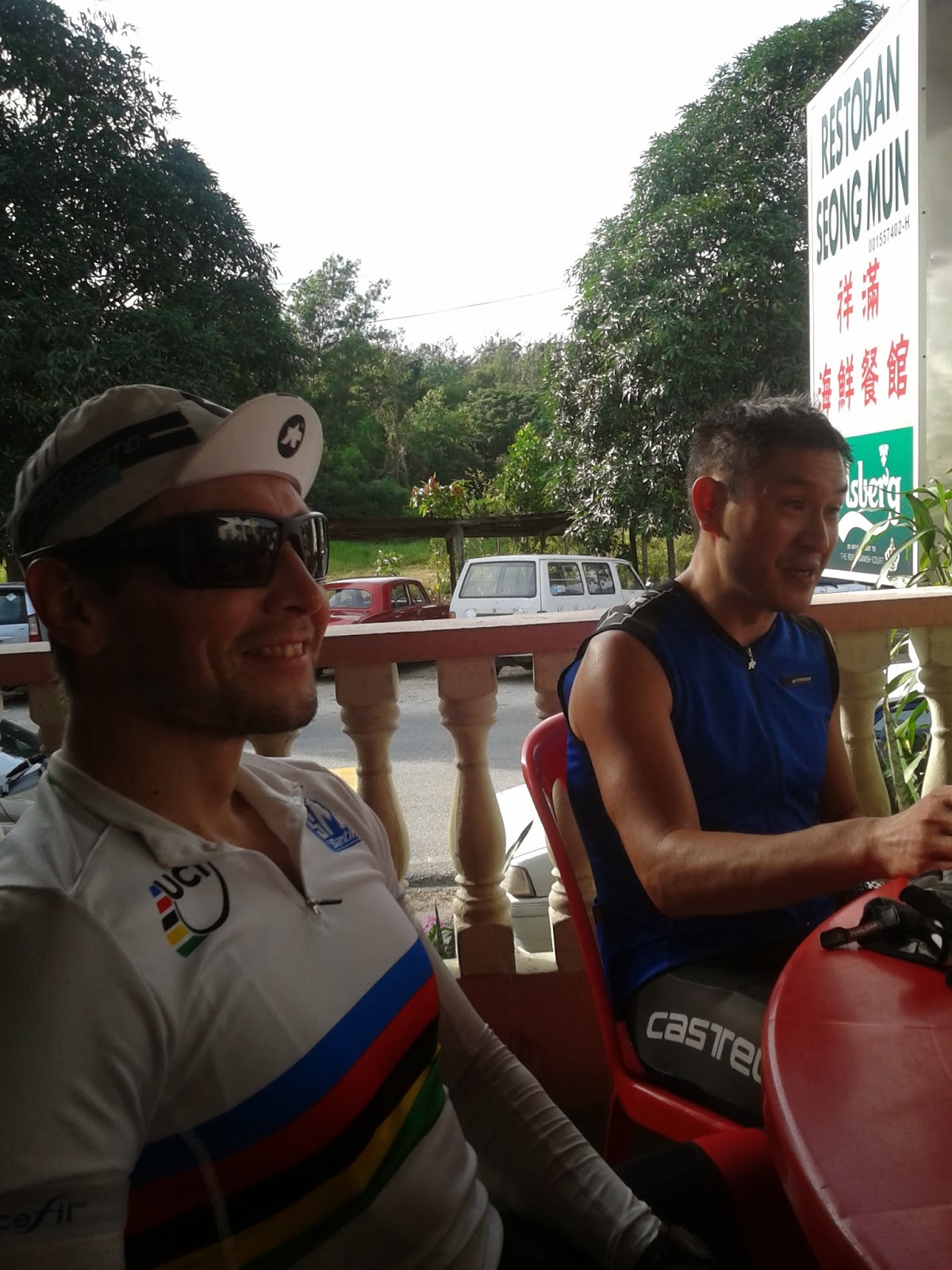 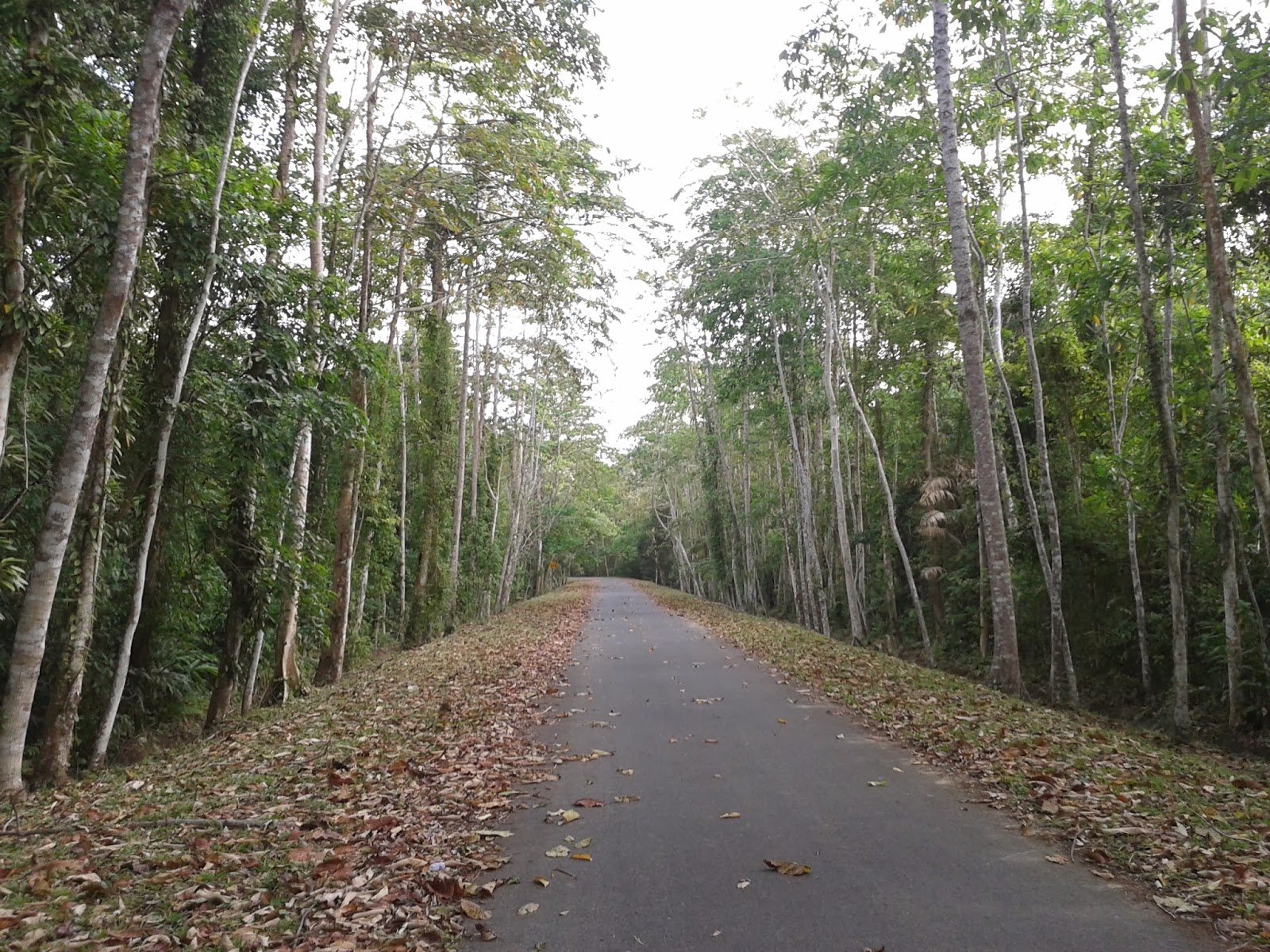 It’s Chinese New Year. At this time of the year you will always find me in the far north of Malaysia, about 40km away from the border with Thailand in the state of Perlis. This is the hometown of my wife and a necessary annual pilgrimage point for family re-bonding.

The weather at this time of year is the coolest you will get in this region. The north wind is always present, rising to a reasonable force mid afternoon. The skies are clear and it rarely rains but the force of the sun is nicely off-set by the wind which also reduces the humidity significantly. 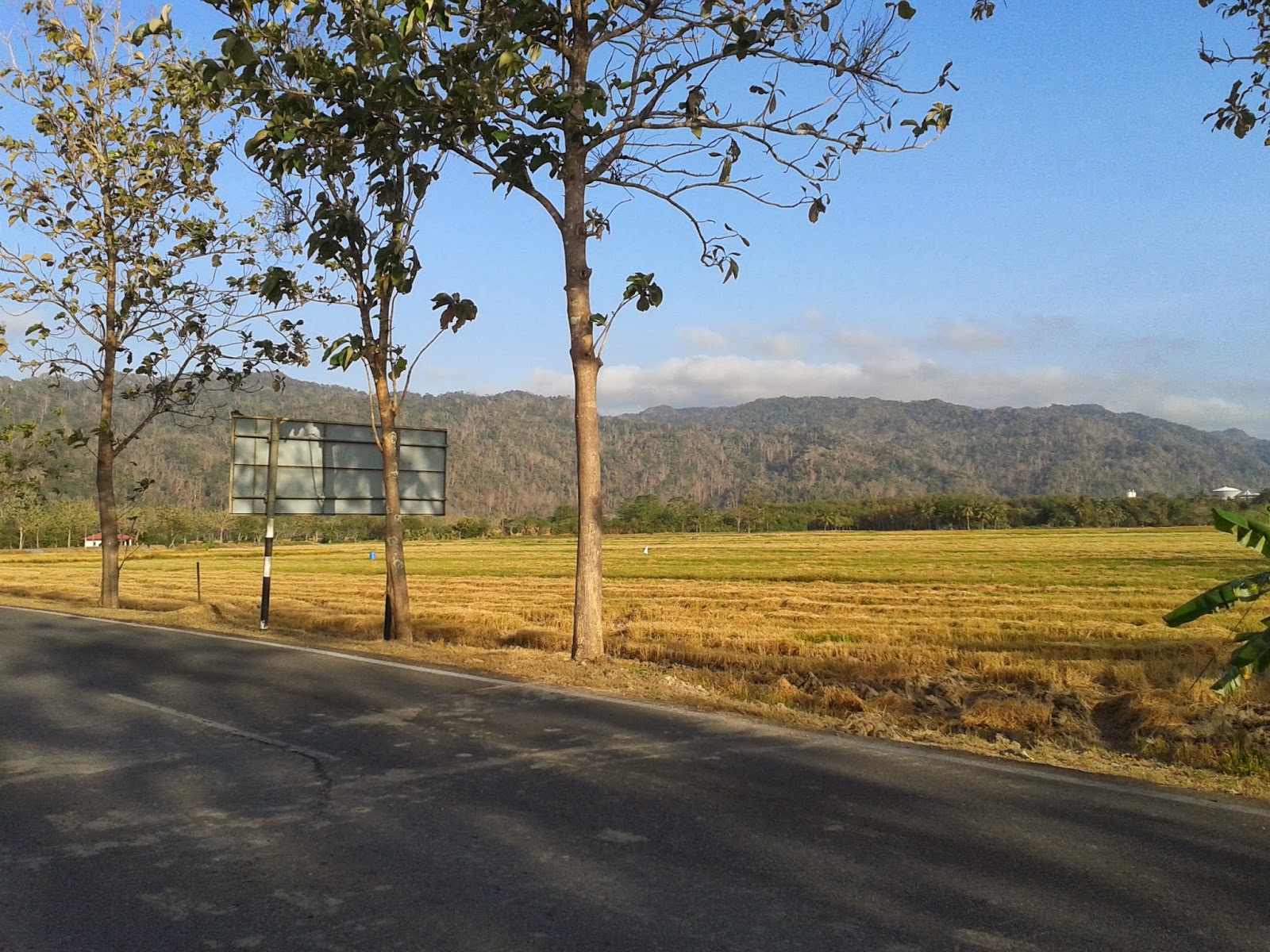 It’s absolutely the best weather for cycling, and of course I never fail to have a bike with me. It’s an area of stark contrasts: the pancake-flatness of the padi fields off-set by the abruptness of the hills which mostly look like they have pierced the surface of the earth by some cataclysmic subterranean force. So lots of flat riding interspersed with some brutally steep climbs.

Most mornings of my stay here you’ll find me out on my bike for a few hours, spinning around my favourite routes, but - eternally inquisitive - I can never resist seeing where roads I’ve never been down lead to. 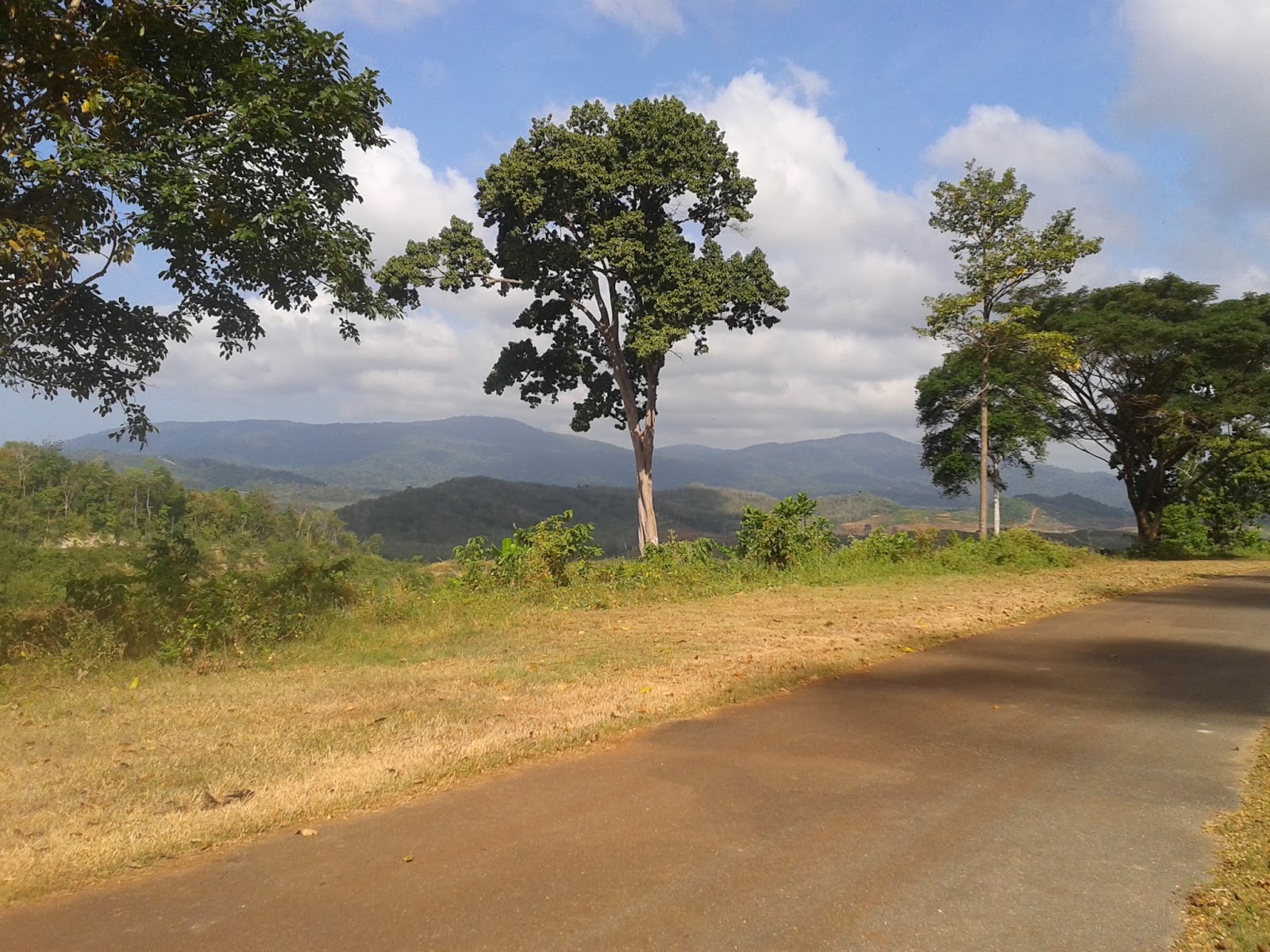 On one such exploration I followed a road through the back of a village that had no indication of direction, but nevertheless was well tended and seemed to be going somewhere. The road eventually came to a police post - not an unusual sight in this border area - at a T junction. Since there didn’t seem to be anyone around to get information from, I ventured forward. 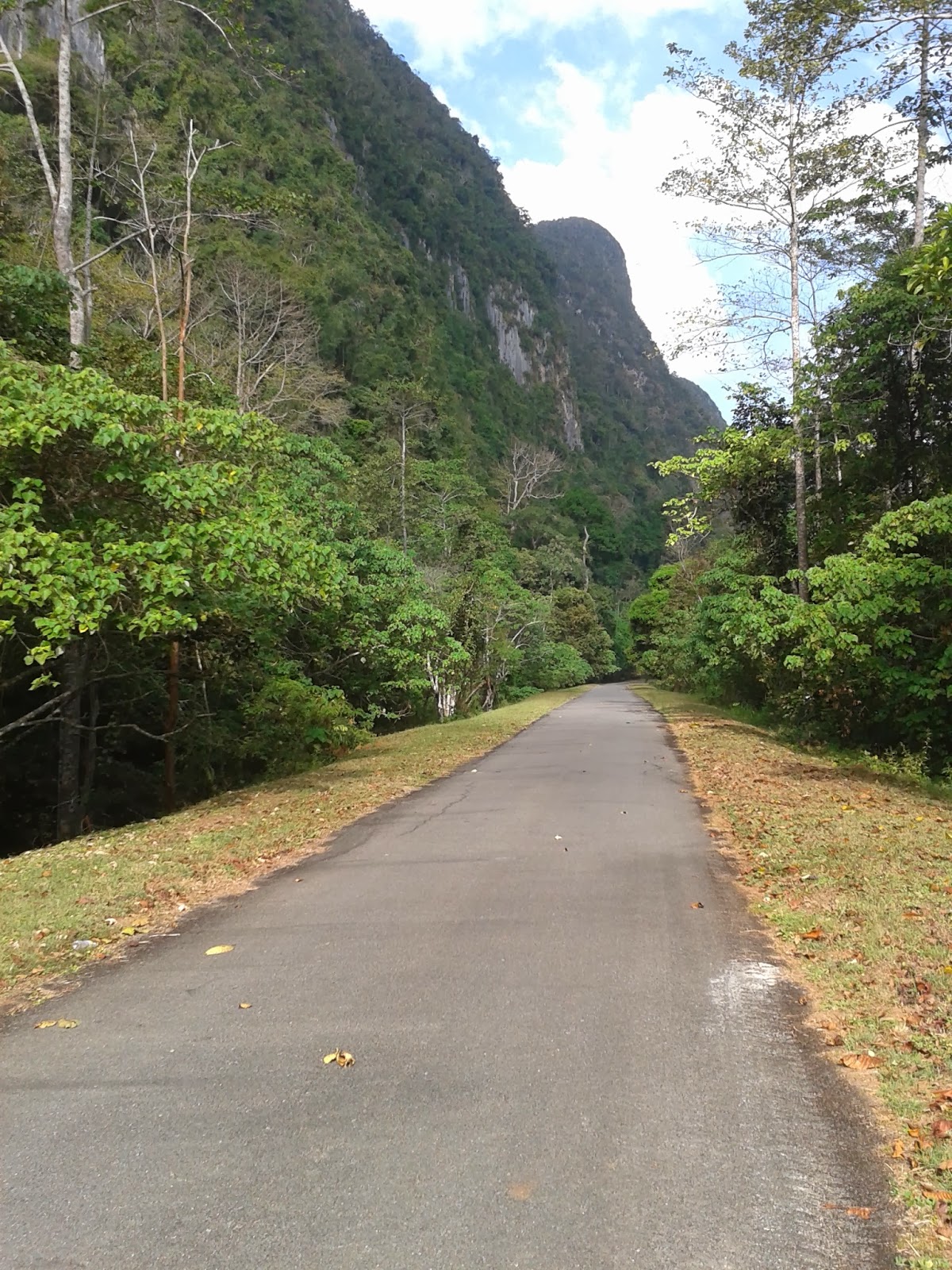 What I came across literally took my breath away. With tidily cropped verges and good tarmac, the road went on and on in both directions through some incredibly beautiful scenery, included a few brutally steep climbs and fast descents......and absolutely no traffic! 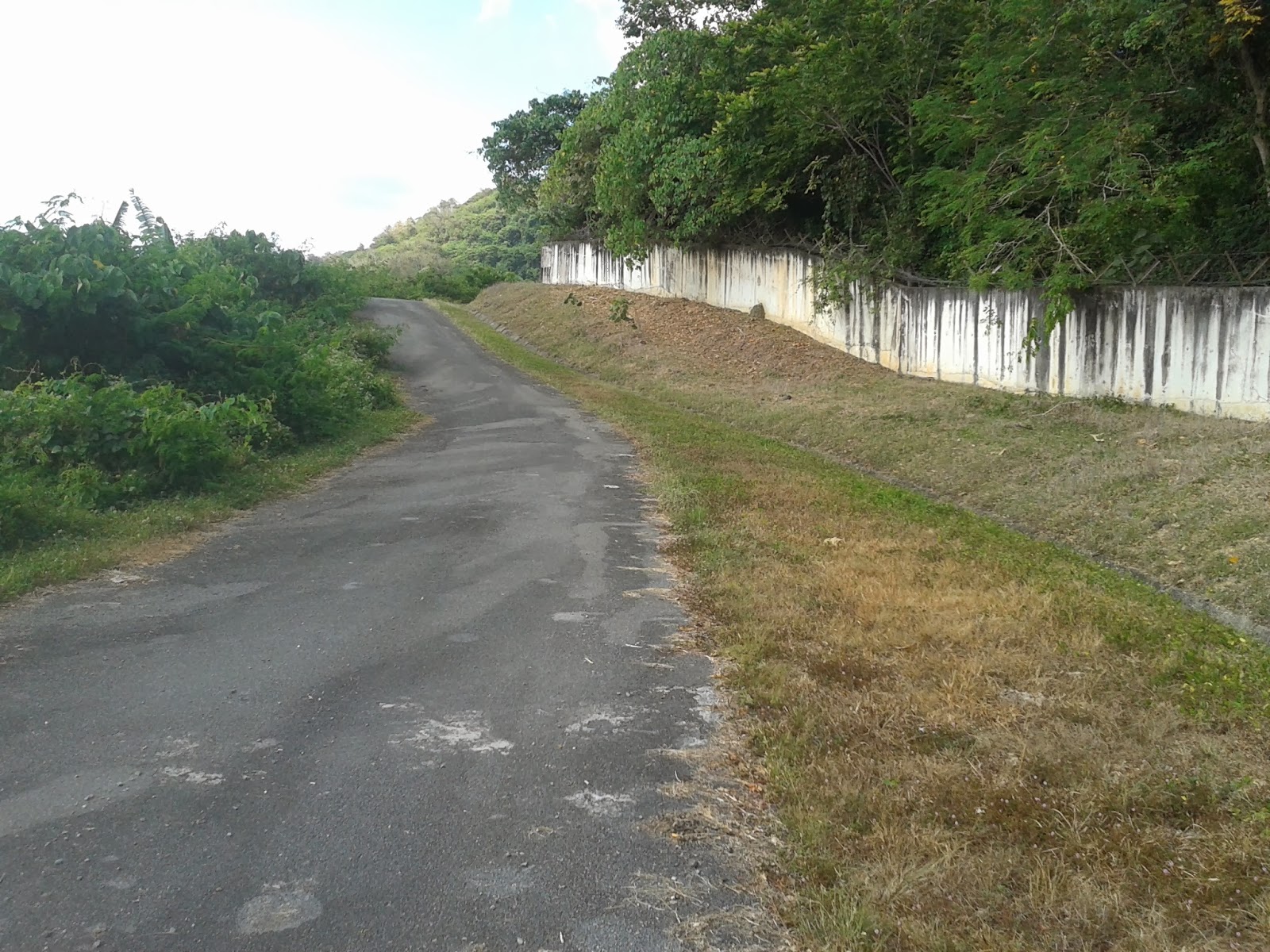 By this time I was talking to myself. “This is too incredible”, “this can’t be real!”. It honestly felt surreal - and slightly spooky - to be riding along on such a beautiful road by myself. Like a 2-wheeled Alice In Wonderland - I’d found cycling heaven! 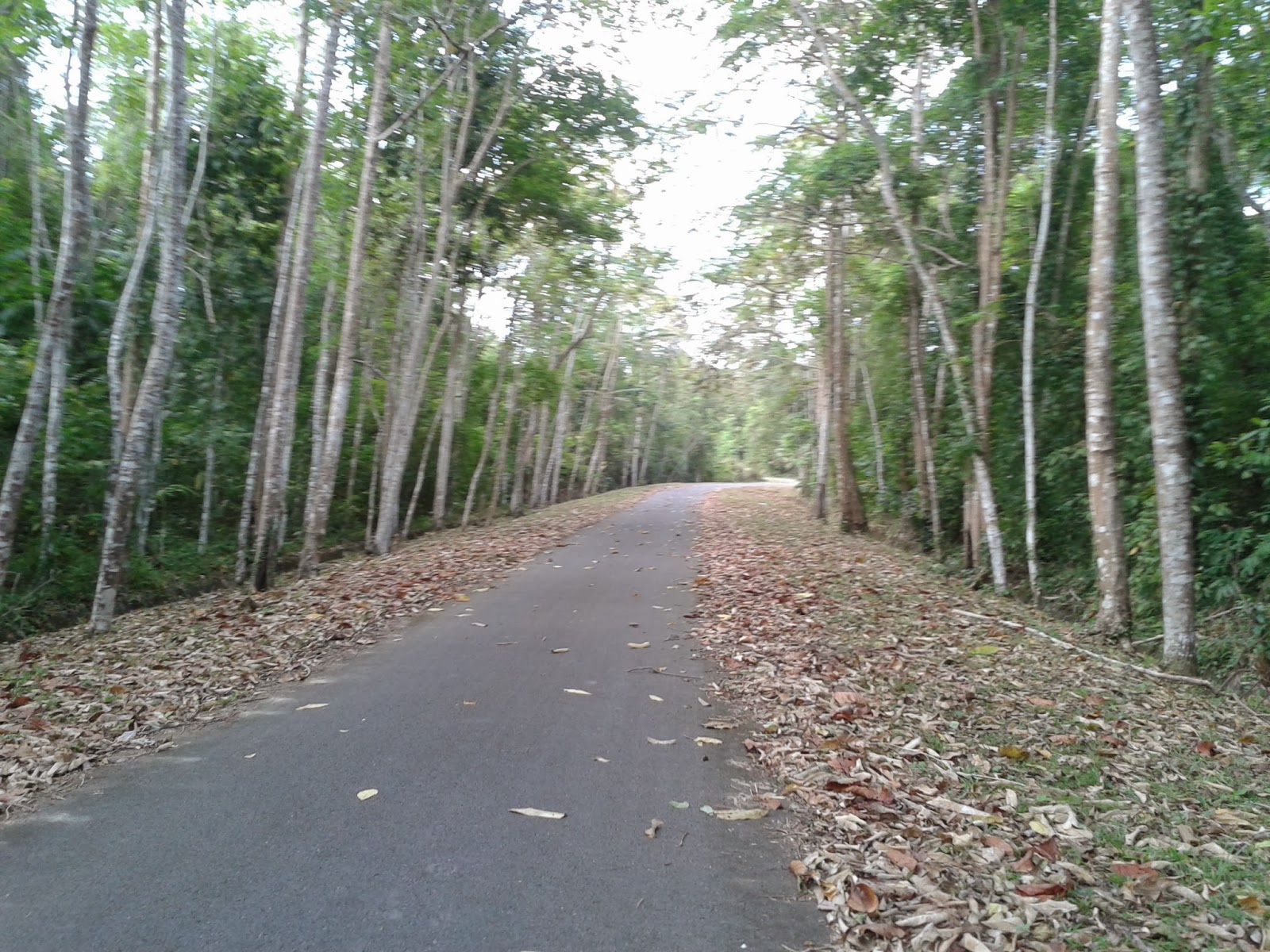 At one point a high wall appeared at the roadside with barbed wire along the top, and then I came across the first of the observation towers and it dawned on me that I was in fact on the border road that ran along the actual wall between Malaysia and Thailand. 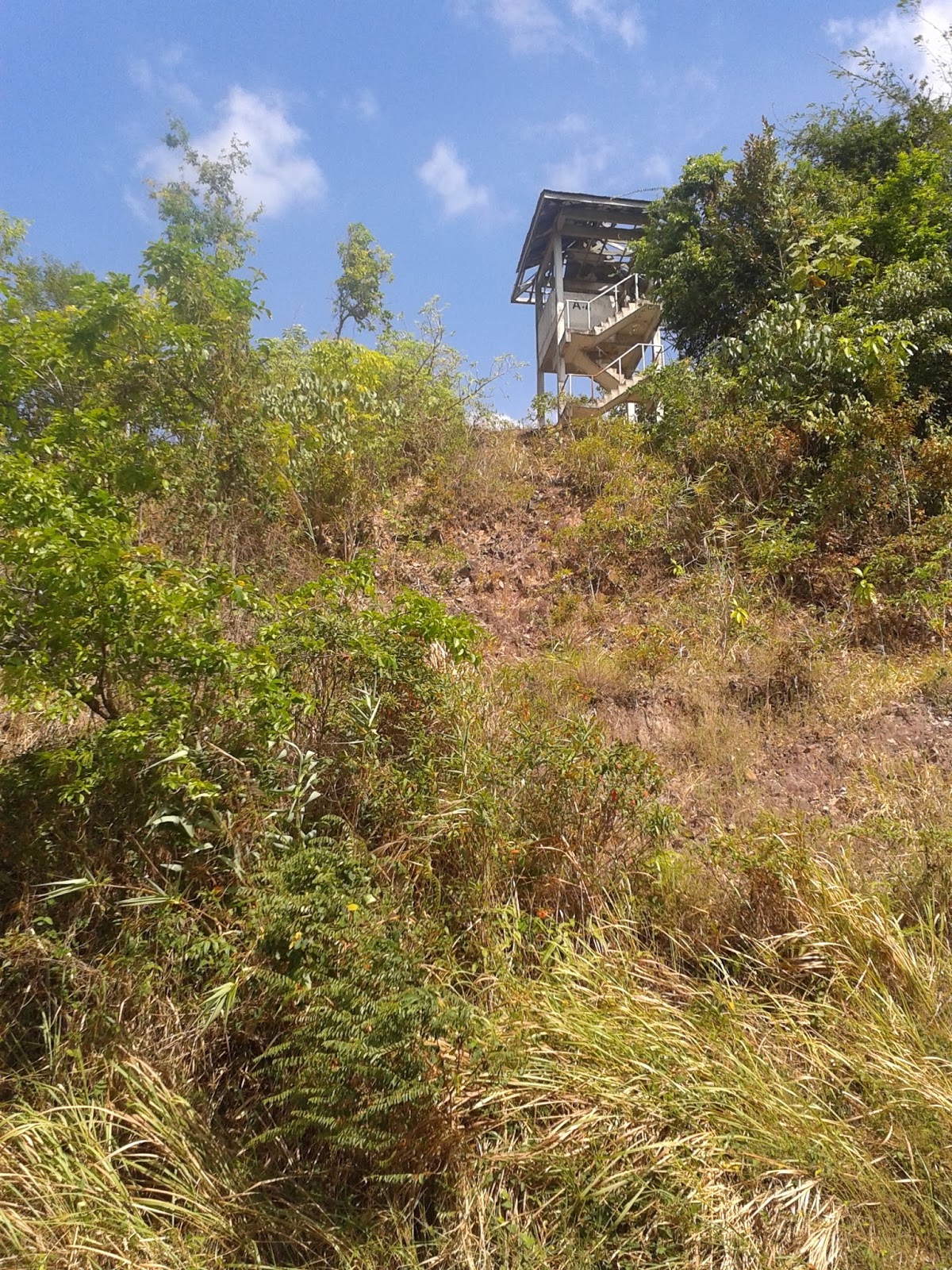 But what an amazing road! 25 kilometers of peace and quiet, climbs, descents and stunning views. Unfortunately not linking anywhere to anywhere, but that is of course it’s reason for survival in this state. In the couple of hours that I was riding on it I was passed by a total of 2 cars and 1 motorbike - all at a crawling pace - and I saw one dog and one human. Incredible. 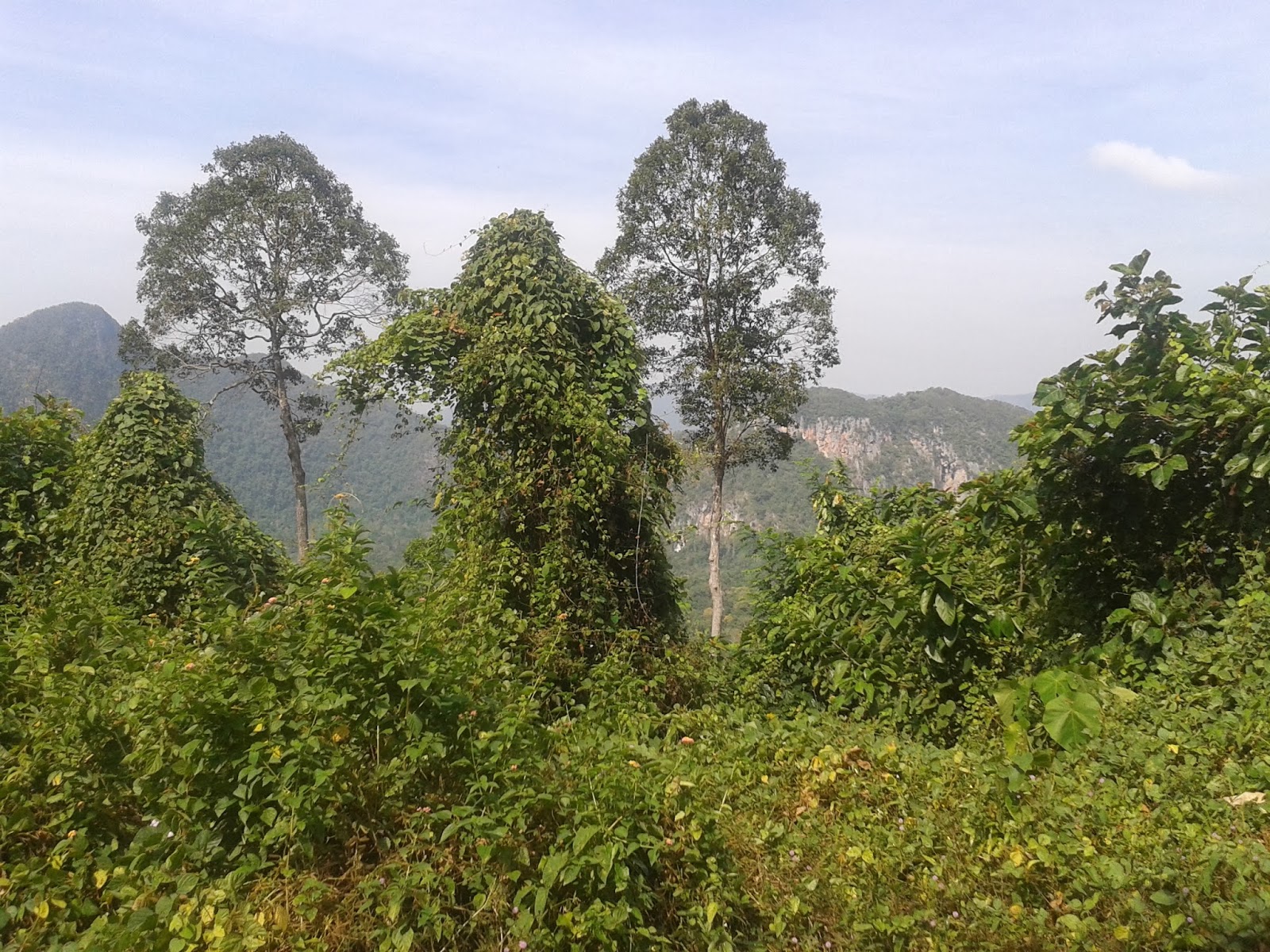 That proved to have been a busy day. On most subsequent rides I haven't come across any other humans. 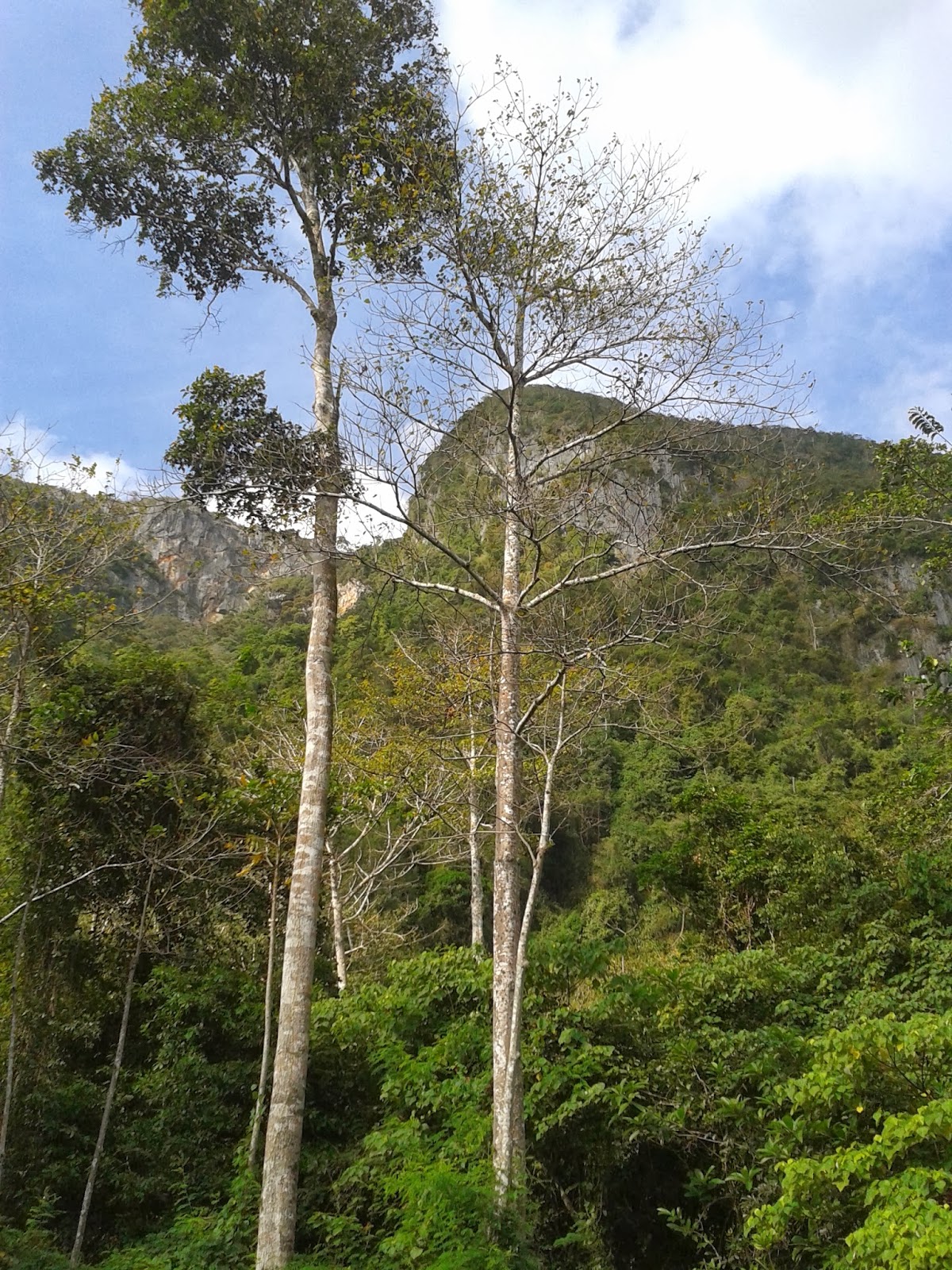 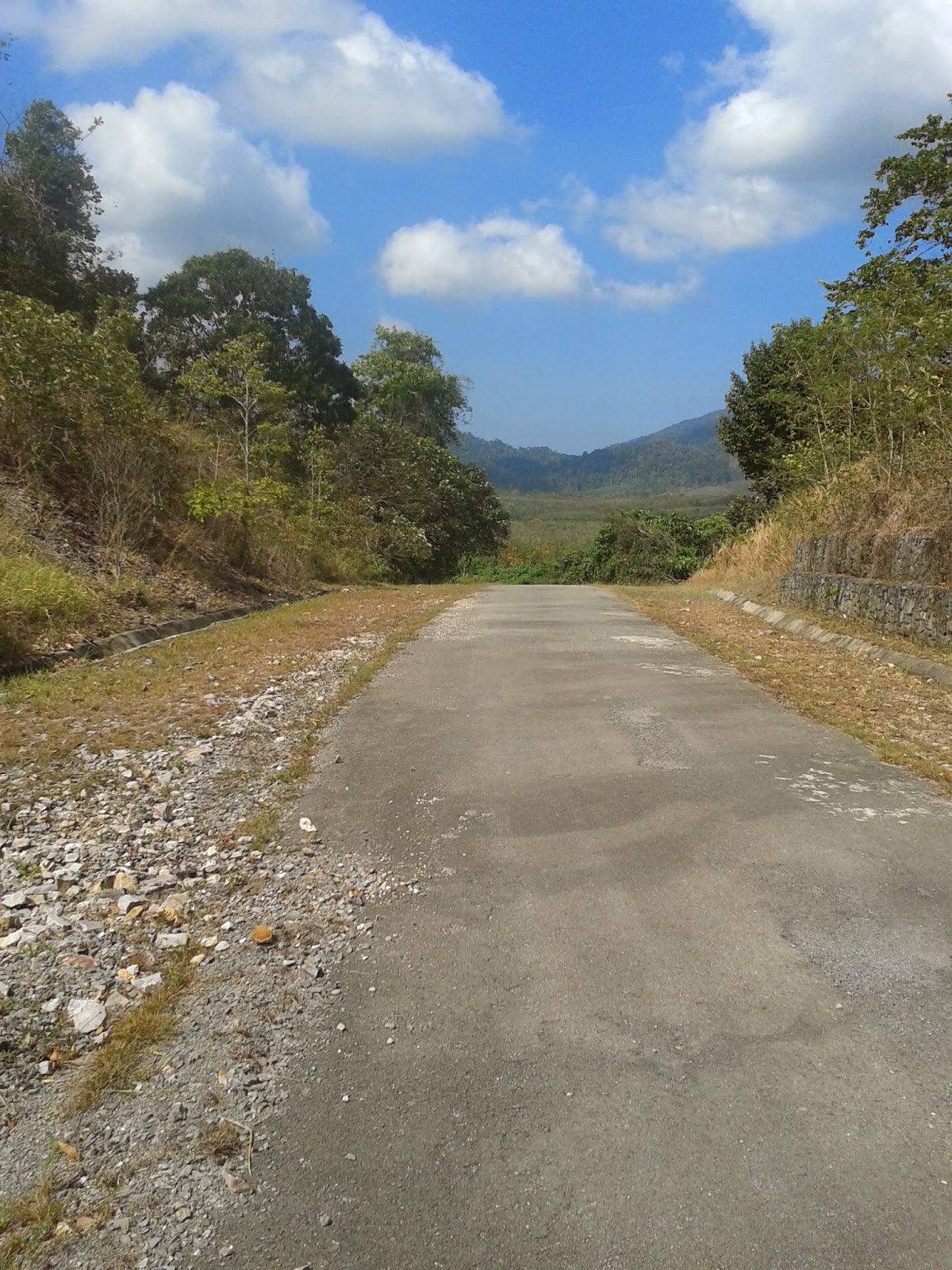 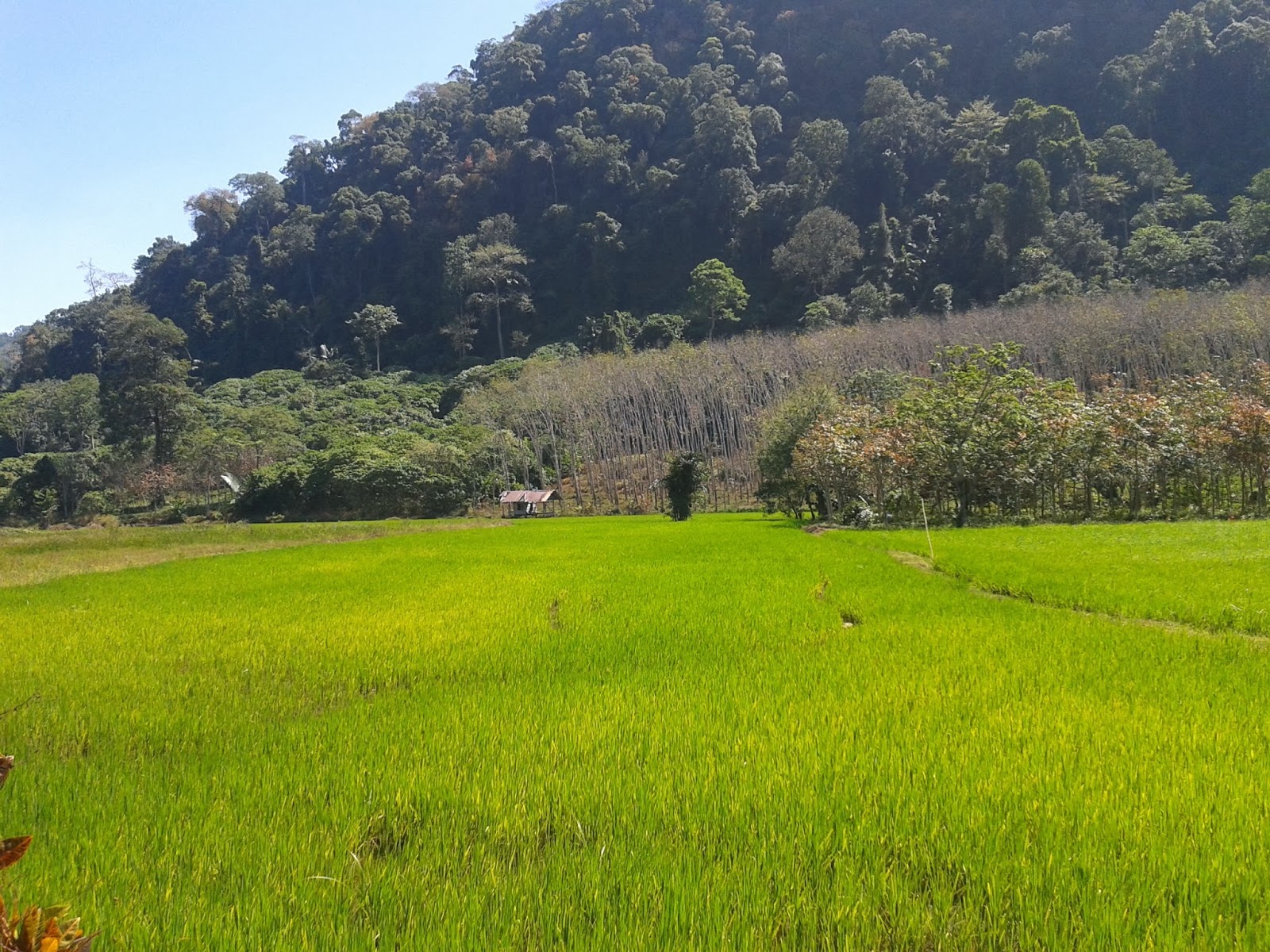 Posted by Cafe Rider at 5:53 AM No comments: