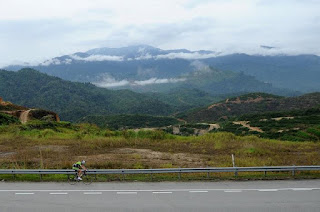 If you've been following my blog, or Strava (or any of my other social networks) you will know of my penchant for long bike rides. As I pointed out in my recent blog post, Confessions of a Budding Endurance Junkie, I'm probably just getting started.

A little over a month ago, one of the more serious of the road riders on the local scene got in touch with me to ask if I'd be interested in helping him put a team together for the upcoming Audax 600 - a 642km ride - the first of this distance in Malaysia. I looked at the dates, and decided I could do it, and that was it. The ride is now less than a week away and there's still only 2 of us....

It's not that I didn't try to enlist others from my riding buddies to join. I did. Too short notice for most people, and I do think that it's so far beyond anyone's comfort zone, that it will involve a level of suffering most are unwilling to subject themselves to without some serious preparation

For those of you who are new to the Audax concept, these are long "randonneur" style rides over distances from 200 to 1000+ kilometers, which are officially sanctioned by the French organisation Audax Club Parisien. Each participant must ride unsupported, and has to complete the course within the cut-off time via all the official check points on the route.

In terms of real physical preparation, there's not much more I can do than I already am doing. For the last few months I've been doing at least one ride every other week over 200km, and have done some back-to-back days accumulating more than 450km and over 4000m of climbing in a 2-day block, so in many ways I've already done the ground work.

The issue here is how to mentally approach the ride - how to divide this distance up. How often to stop, and whether we need to get some sleep, and at what point in the ride.

I've scoured the internet for information, but I don't find anything particularly enlightening. Lots of advice, but the bottom line in most cases is: listen to your body and rest whenever you need to. Just have to keep track of where we can get water/fuel.

Fueling strategy with me is fairly simple. I will probably have to stop every couple of hours to fill bottles with water, and at this point I will also plan to eat. Since I'm ketogenic I won't be as dependent on carbs as many of the others that I'm riding with, but I'll eat whatever is available as I'll be burning a lot of calories!

Equipment is another straightforward one: don't use anything you're not used to. It will be my trusty old carbon road racer, with nothing changed, but with a couple of additional bags for carrying stuff. I'll need to carry a power bank to charge my GPS and my phone. I've bought myself lights that should last for well over what I need, and that run on AA batteries anyway, so can easily be replaced on the road. I'll carry a change of kit and some casual shorts and a t shirt in case I need to sleep. Other than that it's just a bit more cash than usual.

Pacing may present more of a challenge. My riding companion is notoriously fast, and has recently completed the formidable Cent Cols in the Dolomites, so he's on another planet in fitness terms. We have discussed this, and he is determined to try and be super-conservative. Let's see. I'm good at pacing myself under normal conditions, and I'm also quite happy riding alone if I find the pace unsustainable. Though riding alone in the middle of the night on desolate roads with 400+ kilometers in the legs might be more than I bargained for. I've really no idea - I've yet to experience that one.