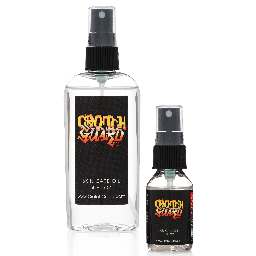 After all this talk about bike-fit, saddle-fit and related comfort (or lack thereof), it's perhaps appropriate that I do a review of a relatively new product that attempts to add that little extra bit of comfort and relief to the saddle-weary bottom.

You may have noticed it in ads recently, since the reference to crotch is a little, shall we say, below-the-belt (!), but since the name is actually probably more suggestive of some kind of body armour for martial arts rather than a cycling skin lubricant, it may have escaped closer scrutiny. I think I would have probably chosen a different name for it, but then what do I know. It's kind of cute. As far as function goes though, it's a game-changer.

I have to admit I was never a big fan of chamois cream. For a start, we no longer use chamois in bicycle shorts, and haven't done for the past 20 years or so, and so the whole principle of softening up a brittle layer of dried leather has gone, and with the latter generations of cycling short padding using the ever-evolving iterations of gel pads and sponge, it just creates a soggy mess which is anything but comfortable. I must say I didn't persist with it, so if anyone feels compelled to have a go at me for the above statement, I'd be willing to lend an ear at least.

Vaseline was the lubricant of choice way back when I started getting serious with bike riding, mainly because, as a triathlete, I wasn't wearing a great deal of padding, and since Vaseline (petroleum jelly) is very water-resistant, it's a good one to put on before a swim, that'll still be there when you finally start the run after 40km on a bike. The only problem is: it's still there the next day when you wash the clothes too, and unless you're very diligent, all your clothes end up with a slightly oily feel to them even with copious amounts of detergent.

When I moved on to proper cycling shorts, that's just way too much absorbent padding to be able to get away with the use of petroleum jelly, which ends up as a permanent presence in your padding, and in addition kind of acts as a solvent to the leather coverings of saddles, which is not very good news.

So it's been a few years since I used anything at all really, aside from some skin cream perhaps, mainly to allay the damage already done after a few consecutive long days in the saddle rather than to prevent more damage happening. I just developed callouses in the right spots I guess.

Crotch Guard works like a barrier ointment, in the same basic way as Vaseline, except without the mess. It's definitely of a lighter consistency than petroleum jelly, you spray it directly onto the area you want to protect, and it absorbs into the skin rather than into the padding of your shorts.

Crotch Guard Skin Care Oil strengthens skin at the cellular level.  This is not a chamois cream, you apply directly to the skin.  The product will absorb completely for a clean and natural approach to the saddle.  Once absorbed the formula surrounds and strengthens cellular membranes creating an effective defense barrier to eliminate friction and chafing irritations. And that protection lasts up to 8 hours! We recommend applications before riding and after showering for continuous prevention of chafing irritations, and to maintain the moisture balance of the surface of the skin. This is Serious Protection for Serious Cyclists!!
Each bottle contains 4 fl oz with a fine mist fingertip spray closure. The mist has a great cooling effect against the surface of irritated skin, and the pump control avoids messy drips and wasteful spills.

The third big advantage is that you can use it after your ride to help your skin recover. This means it's a one-stop process for saddle-related discomfort.

It's very convenient to apply - though you'd better remember to put it on before you put on your shorts - and doesn't take up much space in your luggage when touring. I'd imagine it will also end up being used by triathletes for swim, bike and run chafing issues, though I can't say how well it might hold up against salt water. I'm sure there are a multitude of other sport- and non-sport-related uses for such a lubricant.

All-in-all, the only thing preventing it becoming a go-to item in every cyclist's bathroom is availability. For most of the globe it's only available online from crotchguard.com, though they do say that they have a fairly good presence in retail outlets in the U.S and Europe.

I'm definitely getting a few month's supply in before you all read this!

Cafe Rider
Jazz musician, composer, educator, mentor. There's some advantage to having spent your whole life outside the box. I have become a blogger in the hope of sharing some of it.