I do the Kuala Lumpur to Singapore commute a lot by car. Having a home in KL and a work-base in Singapore means I'm often doing the return trip on a weekly basis. Door-to-door it's almost exactly 400km. That's using the most direct way via the highway which was built for the purpose and goes straight through the more densely-populated western side of the peninsula. 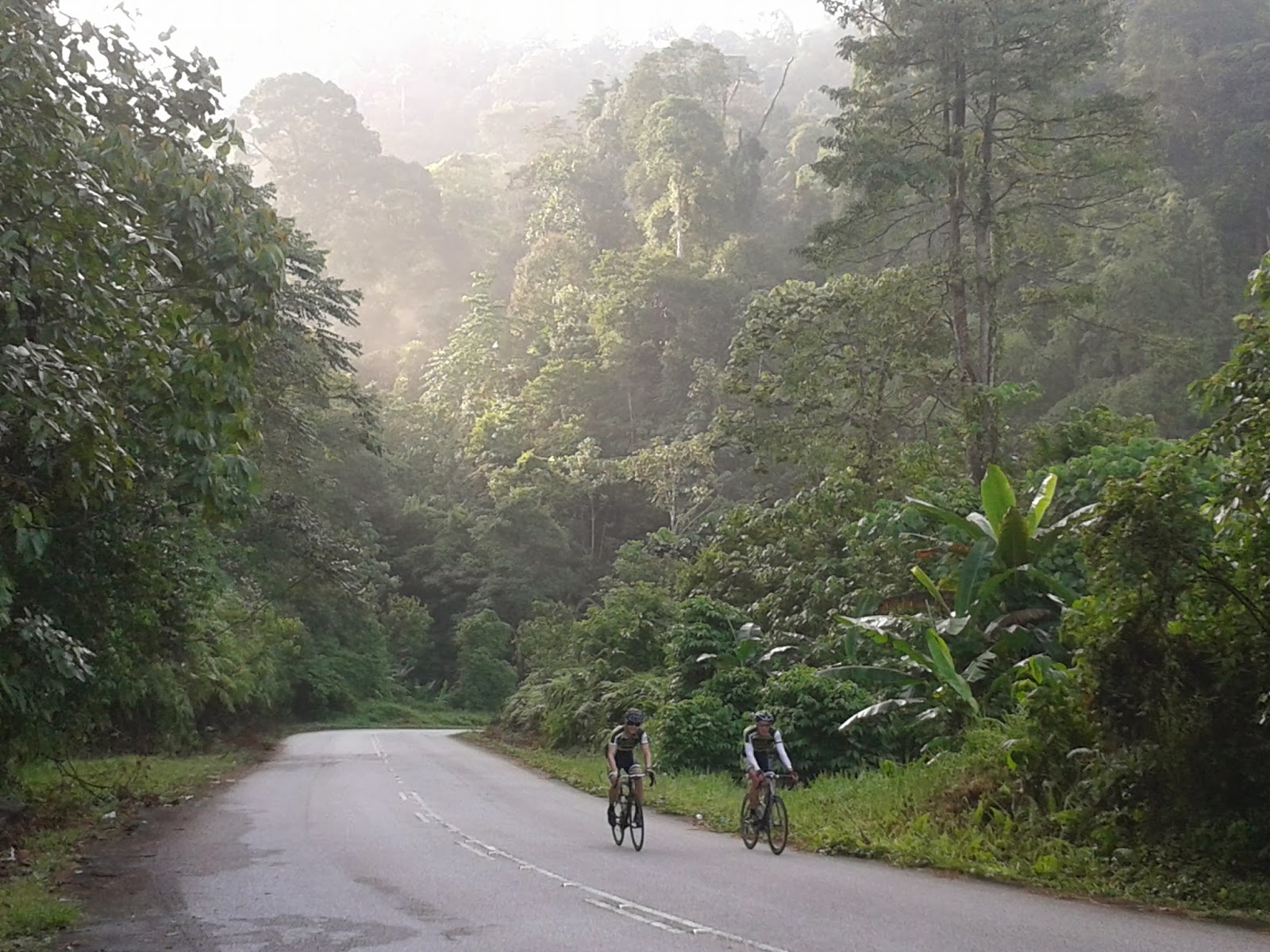 Given the task of coming up with a challenging route on a bicycle that provides stimulating surroundings, good food and rest points, and yet avoids the urban areas, we decided that the best option was to route it down the less-frequented eastern coast. This meant the overall distance would be around 500km. We decided it was probably better initially to aim to do it in 3 days - to test the waters, so-to-speak. It also made more sense to do it southbound from KL into Singapore, even though the more interesting riding was at the KL end, it's just that most of the group would be at work in Singapore the following morning. 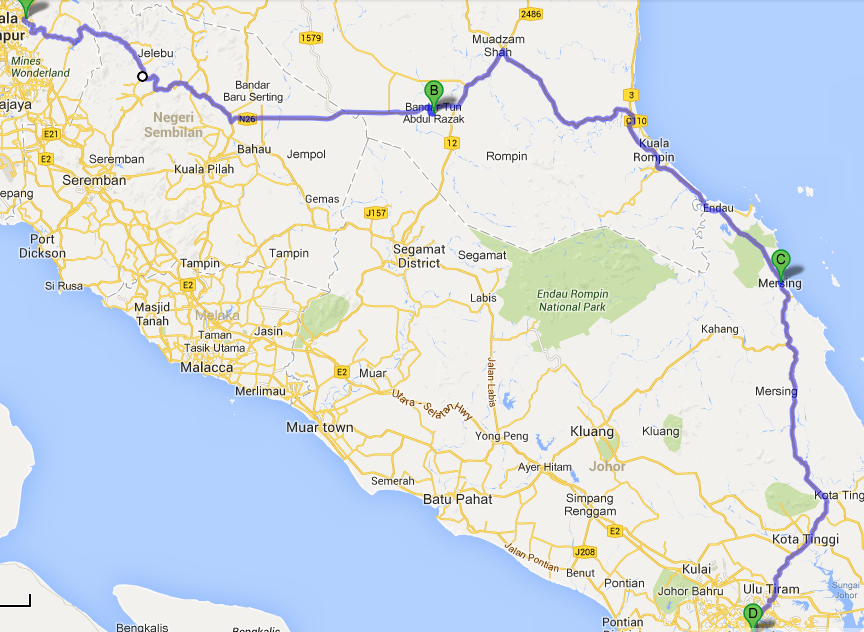 Day 1 from Ampang in the east of KL involved the longest stage at 180km. Necessary to get us through to somewhere with the infrastructure to give us a bed and food amidst the eternal oil-palm estates that make up the majority of this part of the state of Pahang. En route we had an initial 50km involving 3 main hills - virtually all the climbing of the day - followed by a remaining 130km of moderately rolling terrain. 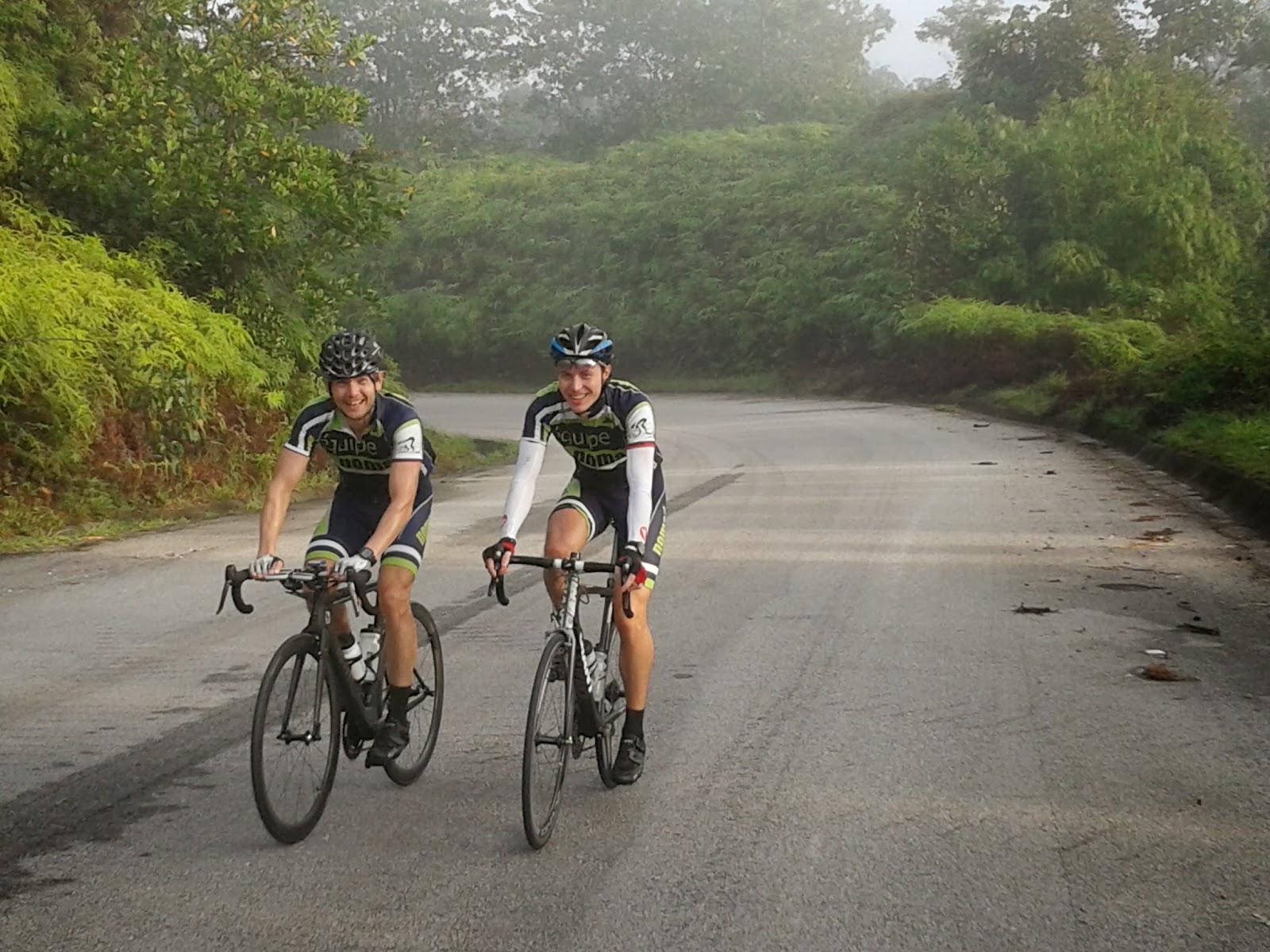 The start of this ride goes through some of the most stunning scenery I know. Though I've been riding these roads for the past 20 years, I can never take this kind of raw jungle beauty completely for granted. From the climb out of Ampang with it's panorama of the city, through Bukit Hantu with it's sharp gradients, and on through the lush jungle over Genting Peras, you are treated to idyllic cycling territory and very little traffic.

From the triple-peak of Genting Peras there's a great, fast descent on good road surfaces back down towards (albeit minimal) signs of village life and our second-breakfast stop at 50km. Kampong fried rice and coffee! The subsequent long roll took us first through Kuala Klawang and then on through more jungle, farmland, and several other towns and villages until we stopped for lunch just before hitting the long, straight link that cuts directly eastwards through the intense dark green of the eternal oil-palm estates. 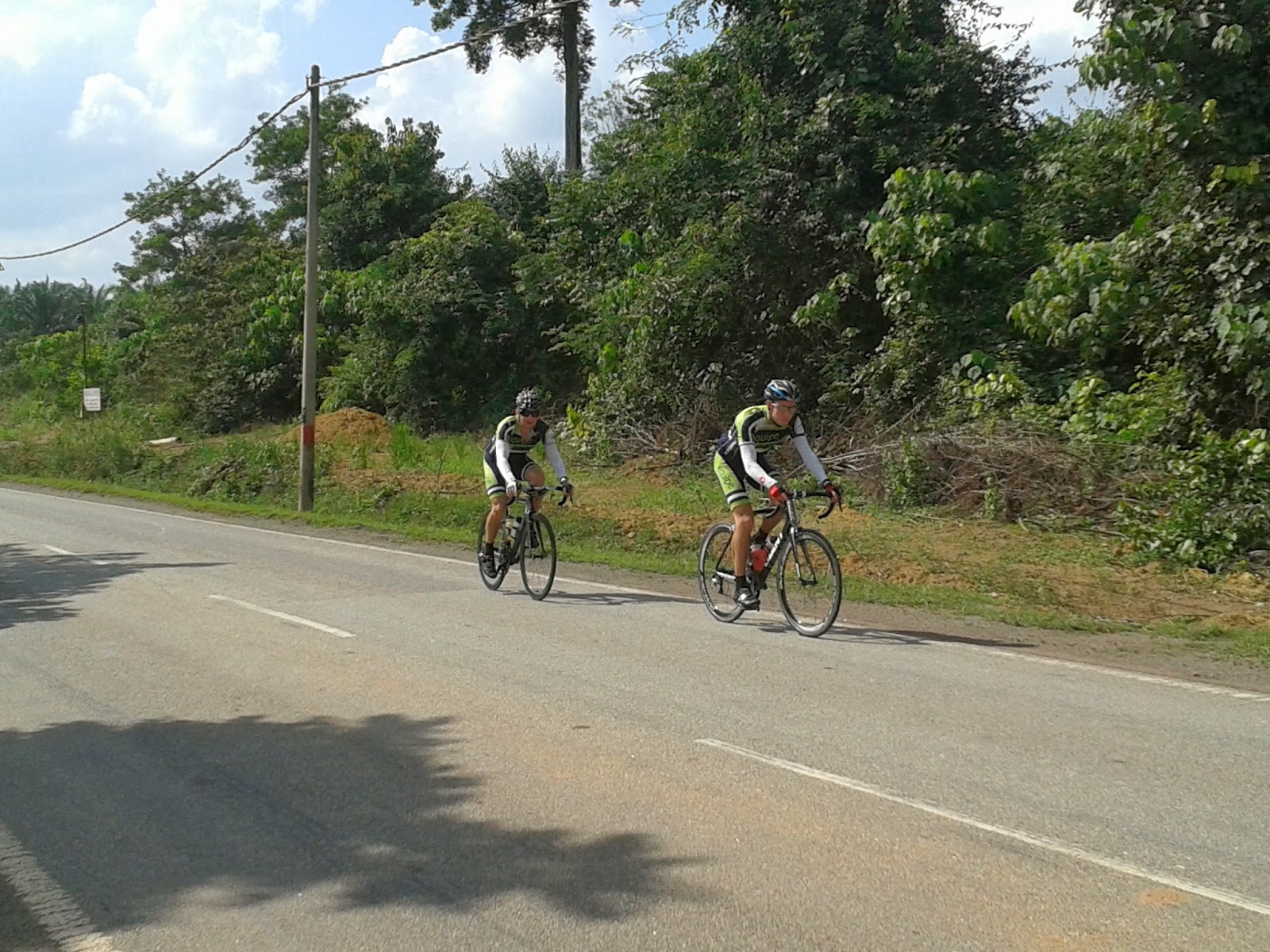 From there on the deviation from a straight line was mostly in the vertical plane. Long rolling straights through densely palm-covered landscape. By now the toll of the first 50k of hills was starting to affect stamina, and we rolled into the day's destination town with little more than fumes left in the tank. The good news was it hadn't rained; the bad news was: we were cooked! 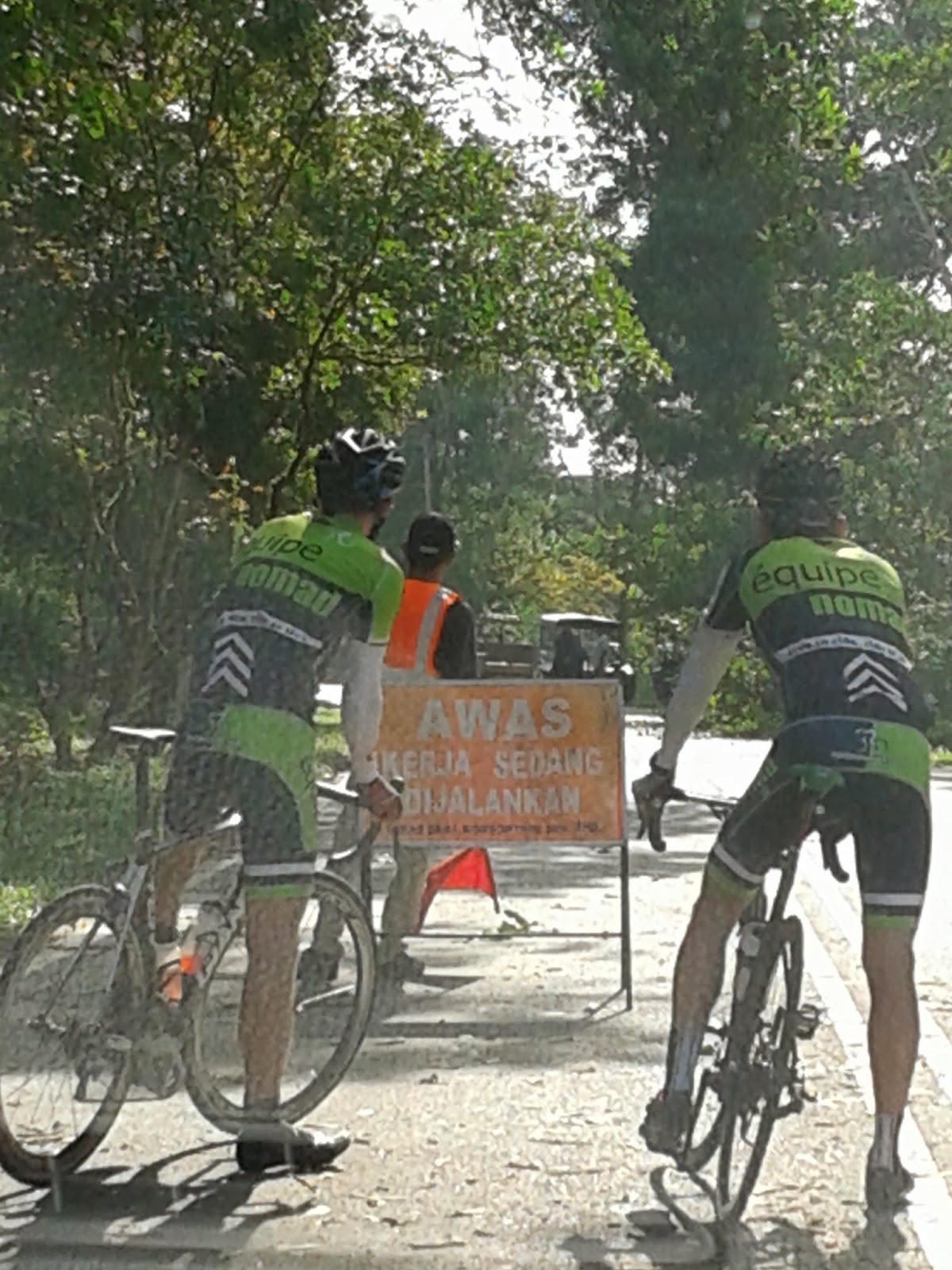 Nothing that some cold drinks, beef Satay and consecutive orders of most of the rice and noodle dishes on the menu at the local food court won't put right. We hit the sack shortly afterwards since there wasn't much going on by way of amusement in this remote little town besides eating. 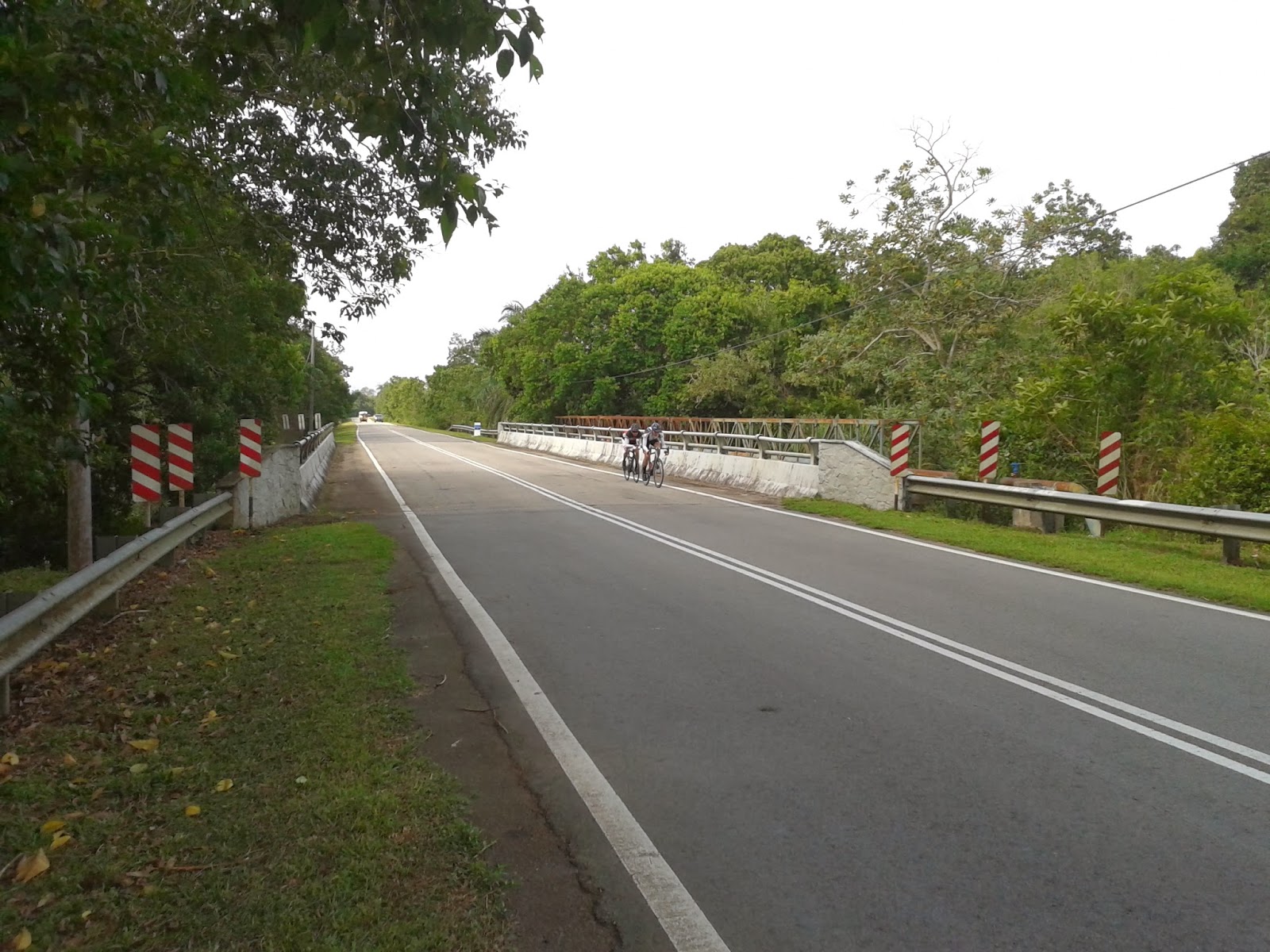 The next morning saw us drag ourselves onto the road with dead legs at around 8 after delaying the start with a few extra coffees. 160km of rolling awaited us. The initial trajectory was northeast on the Kuantan road until we hit the Mersing road around 30km in. From there it was a nicely varied 50km or so until we hit the coast road and lunch at Kuala Rompin. Chicken rice and wantan mee....we definitely raised a few eyebrows with double orders of food, but it was devoured in a few minutes, and was probably all but digested before we hit the road again. 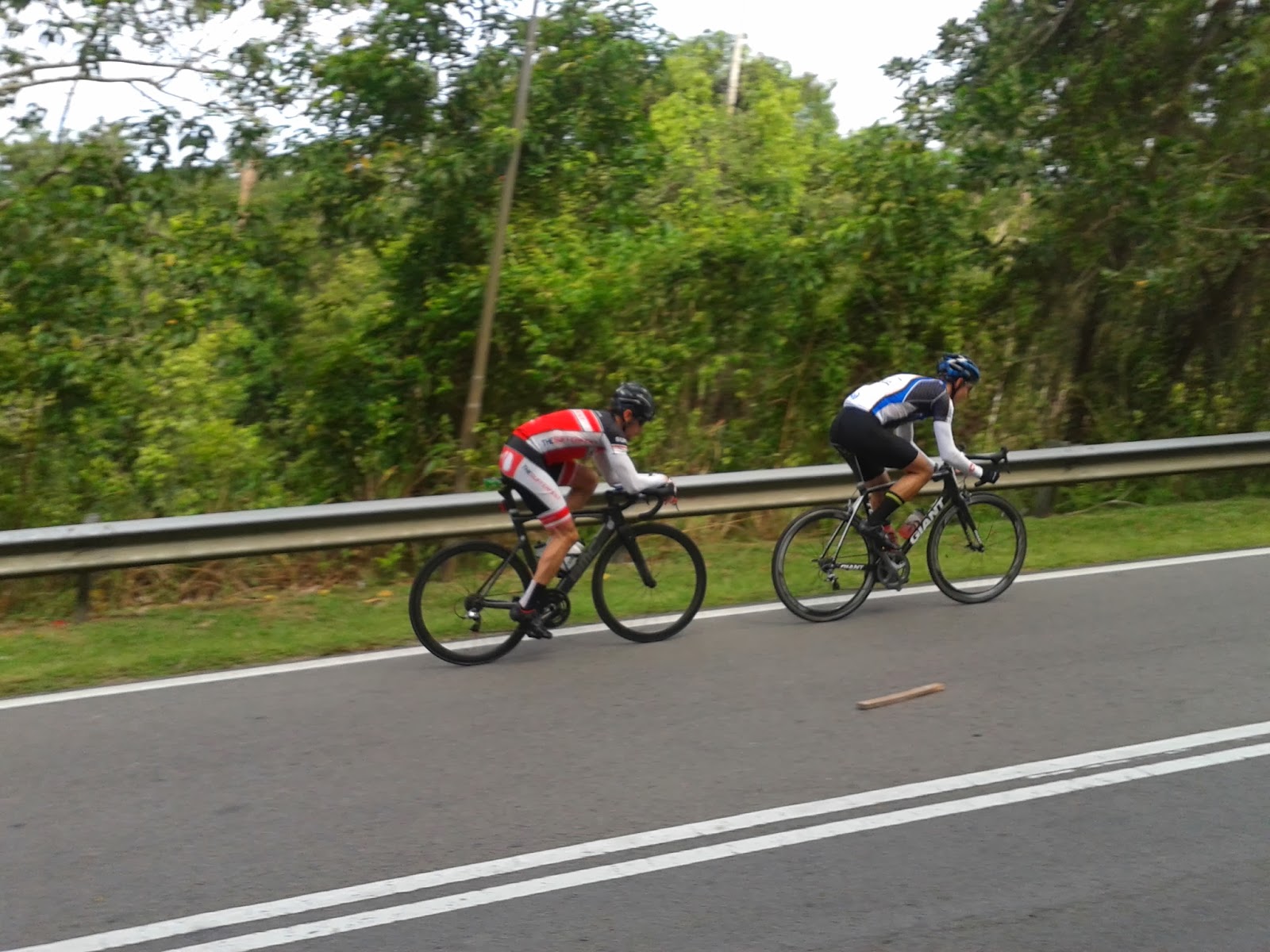 Mersing, the day's destination, is a fairly well-appointed town with all the things one needs for a good after-ride afternoon. We arrived about 2pm after making some pretty good progress (helped by the extra rice and noodles....oh, and a tailwind). Afternoon recovery-tea was Singapore noodles with sweet-and-sour ribs followed by cendol. The nap was quickly followed by a fairly sumptuous dinner at one of the local red-table-cloth places. Steamed Garouper Teochew style with stuffed squid, wild boar curry, and beer. 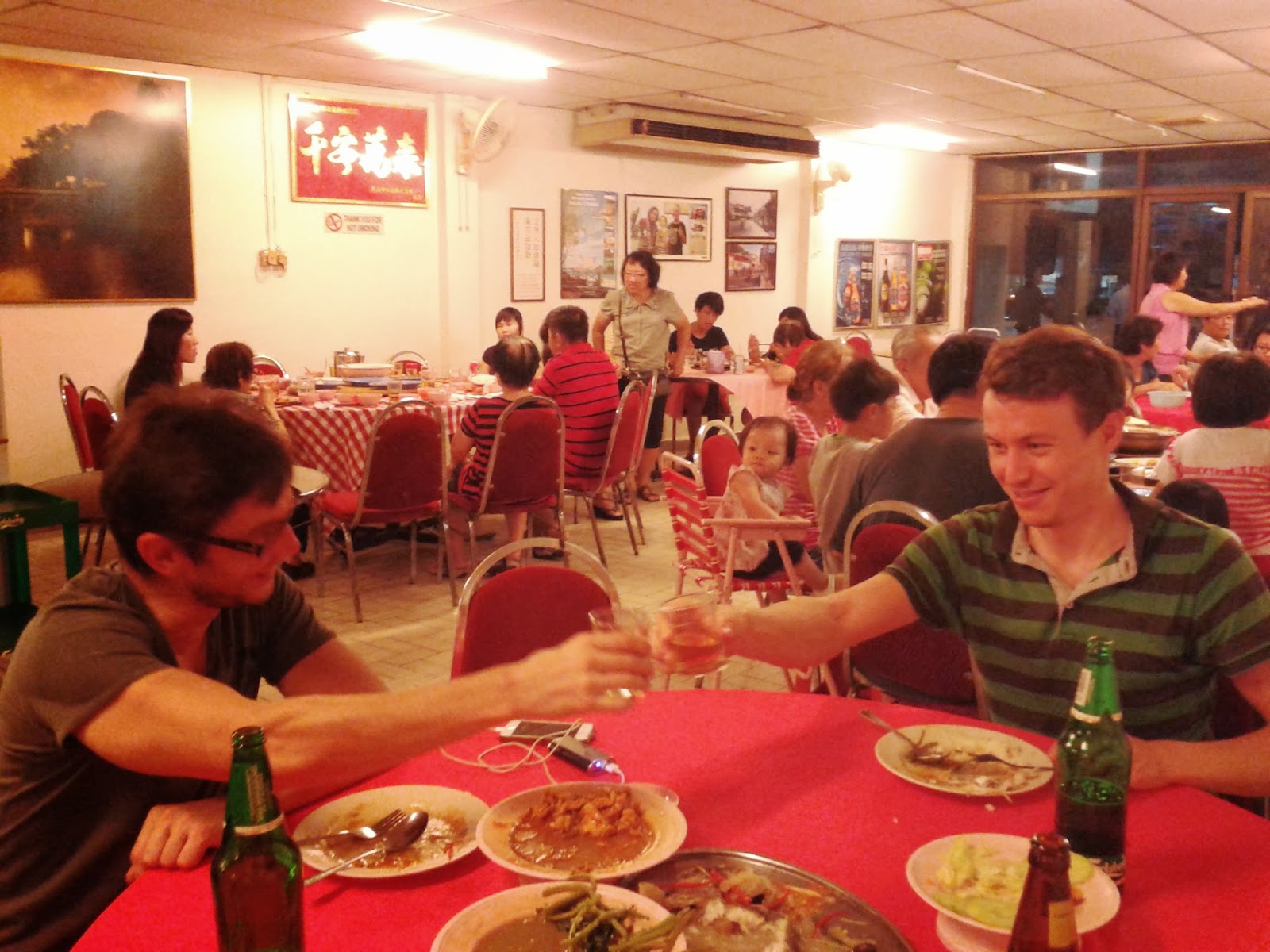 You may have noticed that food starts to play more of a central role as a ride like this progresses!

Day 3 had us out a little later than planned but we made good progress on our continued journey down the coastline. We lucked-upon a great Nasi Lemak about 70k into the ride and thereafter also came across some great local fruit stalls. All good fuel keeping the hammer-fest in full swing! 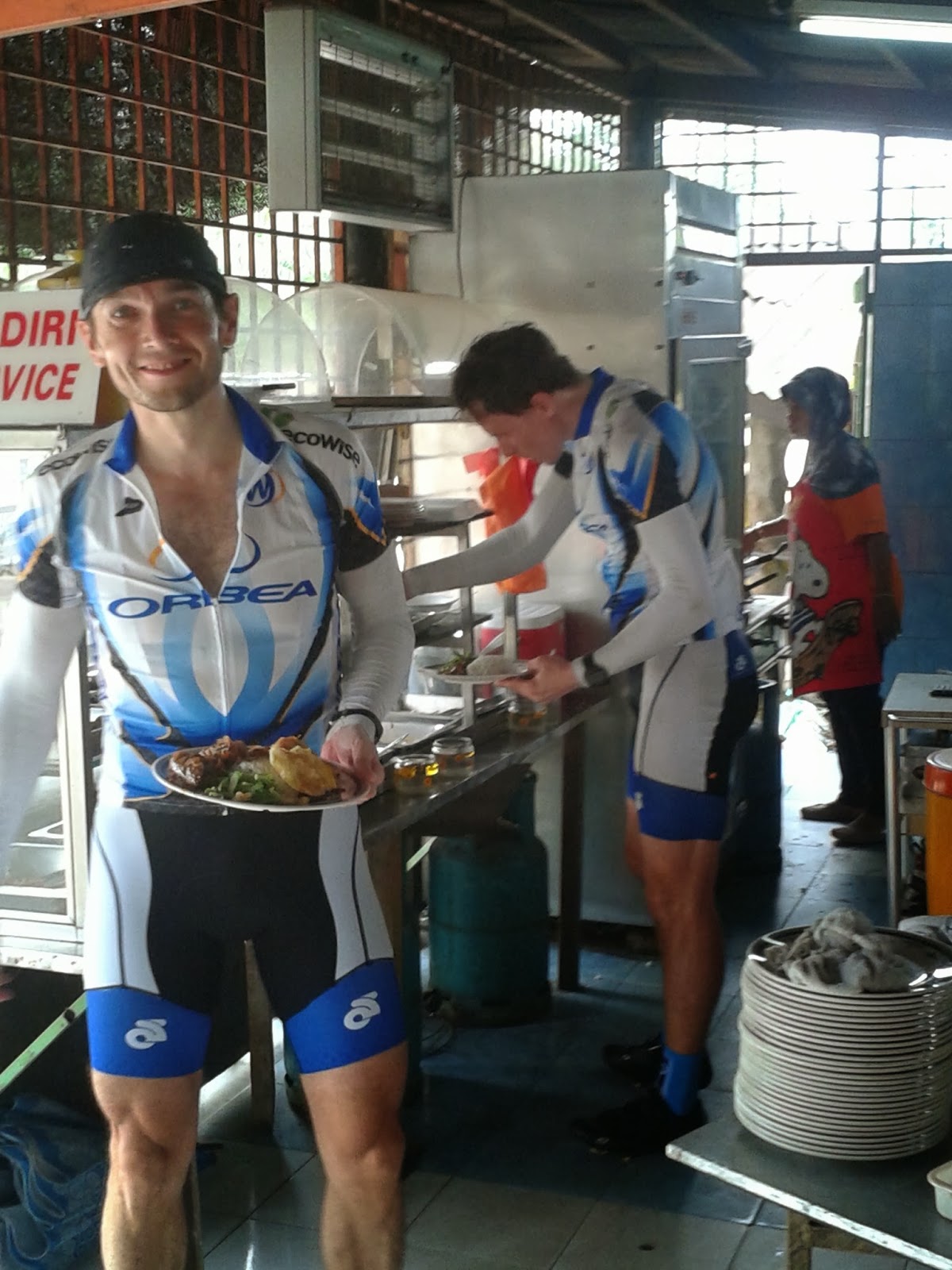 Unfortunately the urban realities started to catch up with us again as we neared the city of Johor Bahru, especially with the school-holiday traffic, and since we had decided to take the more direct, rather than more scenic, route for the last stretch to meet our deadline, we inevitably found ourselves in heavy traffic nearing the causeway. 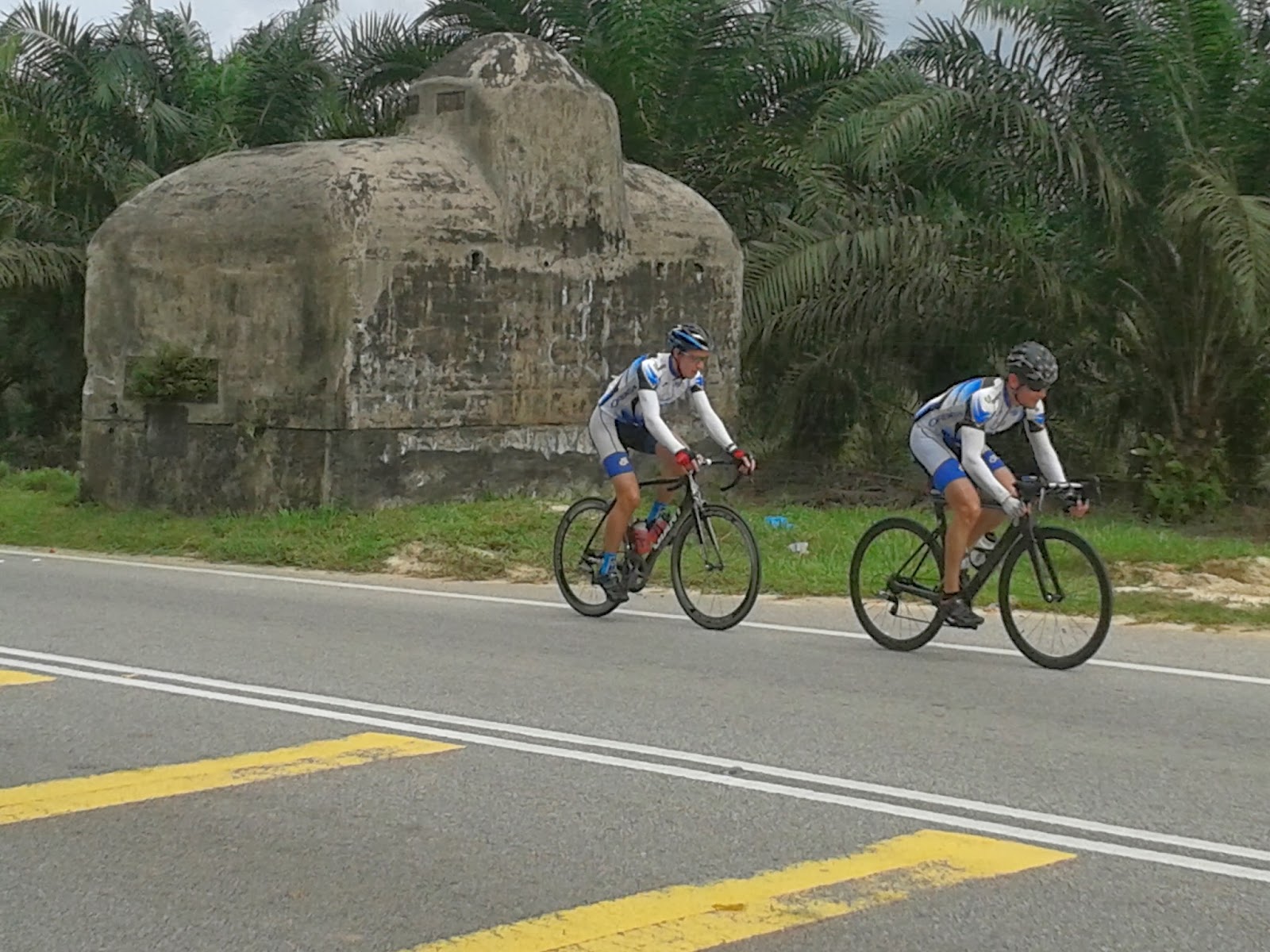 Our deadline was the urgent matter of some friends with a bottle of champagne and appropiate recovery food (french fries) waiting for us at the Soon Watt shop in Singapore's Changi Road. It was a great welcome to have waiting for us, and made the return to city streets that little bit more bearable. Thanks Mave and Suren!

So now that we've done it in 3 days, the plan is to do it next in 2. That may be a month or 2 away but there will be 3 guaranteed participants :) 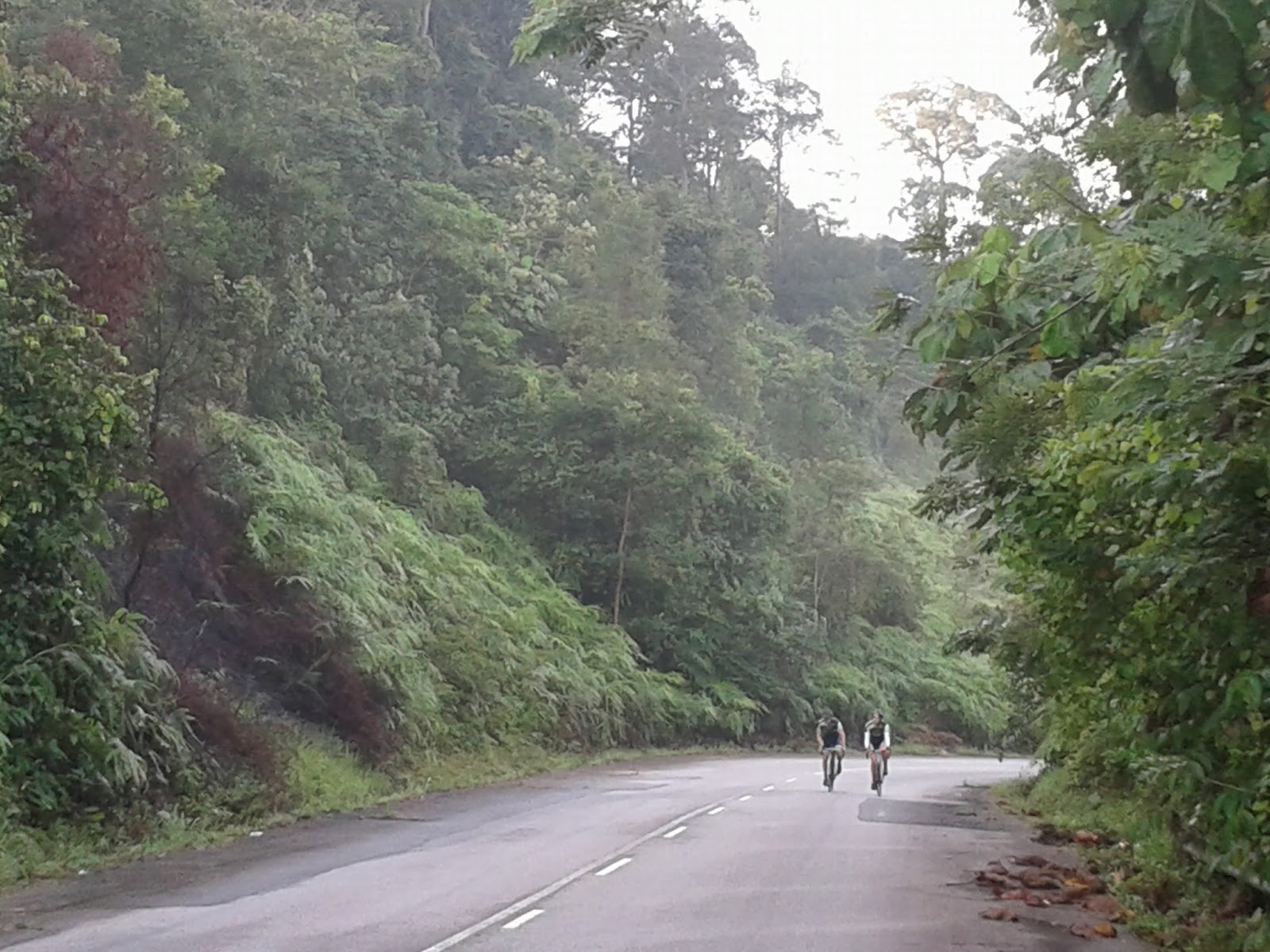 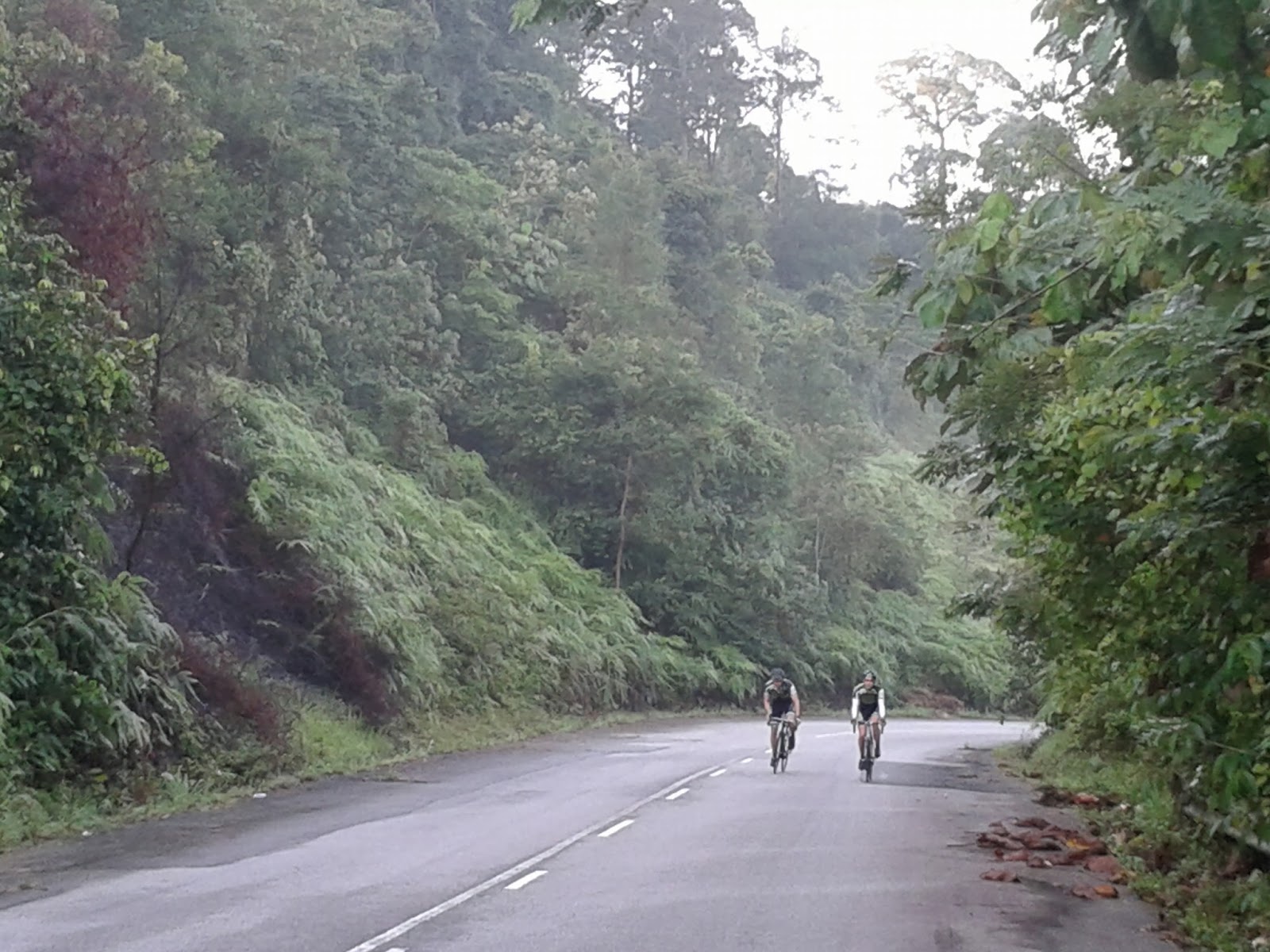 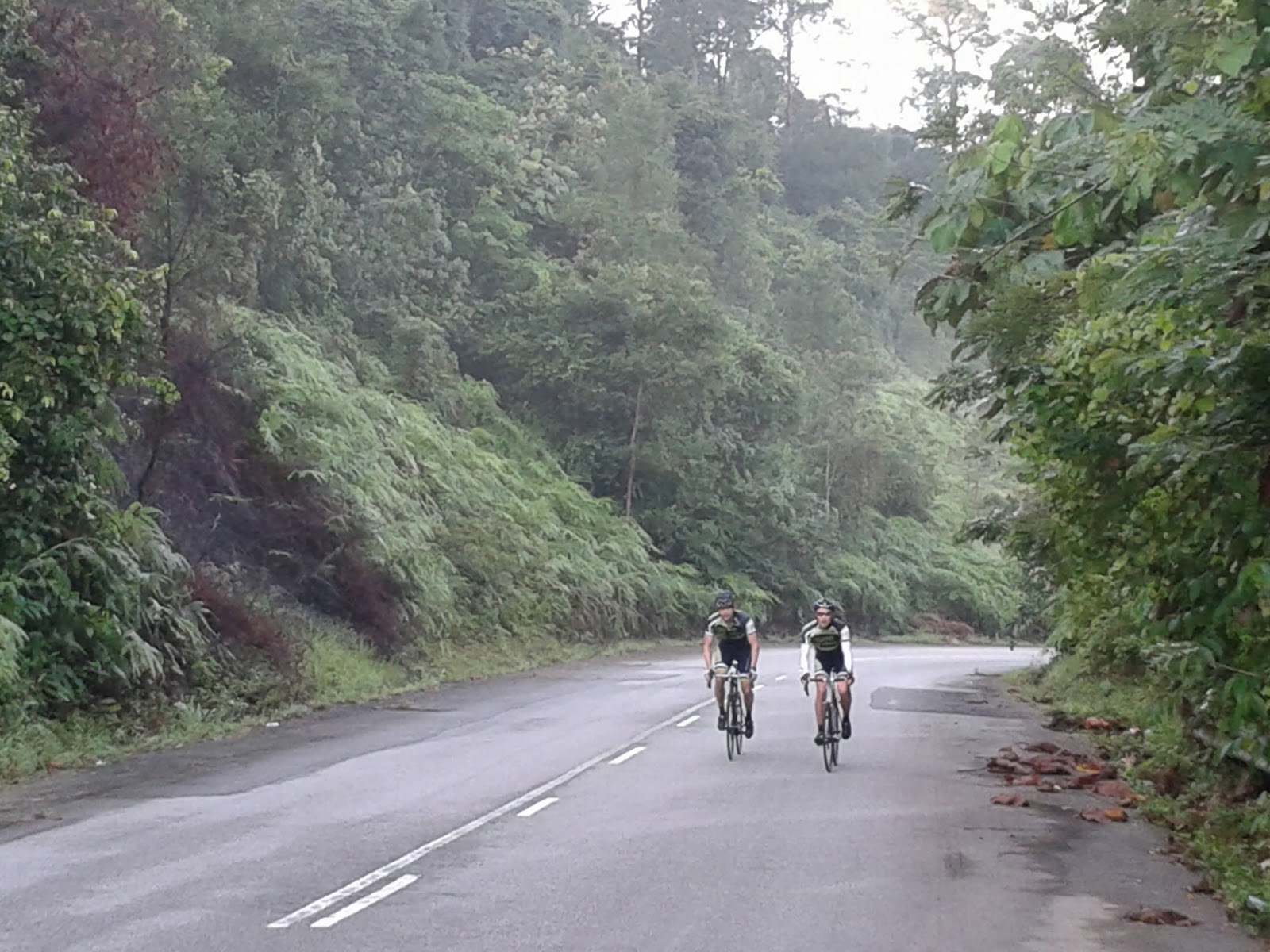 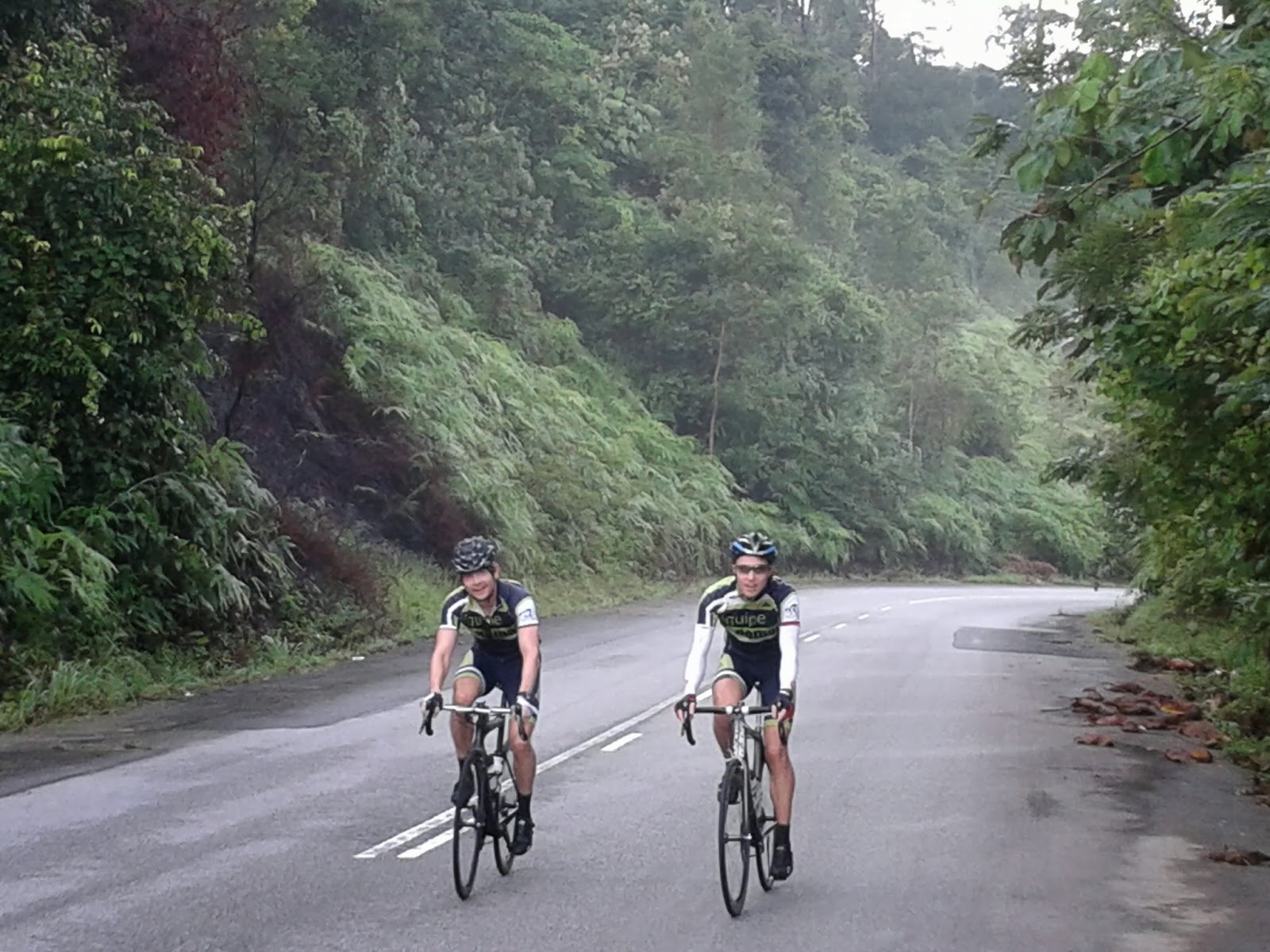