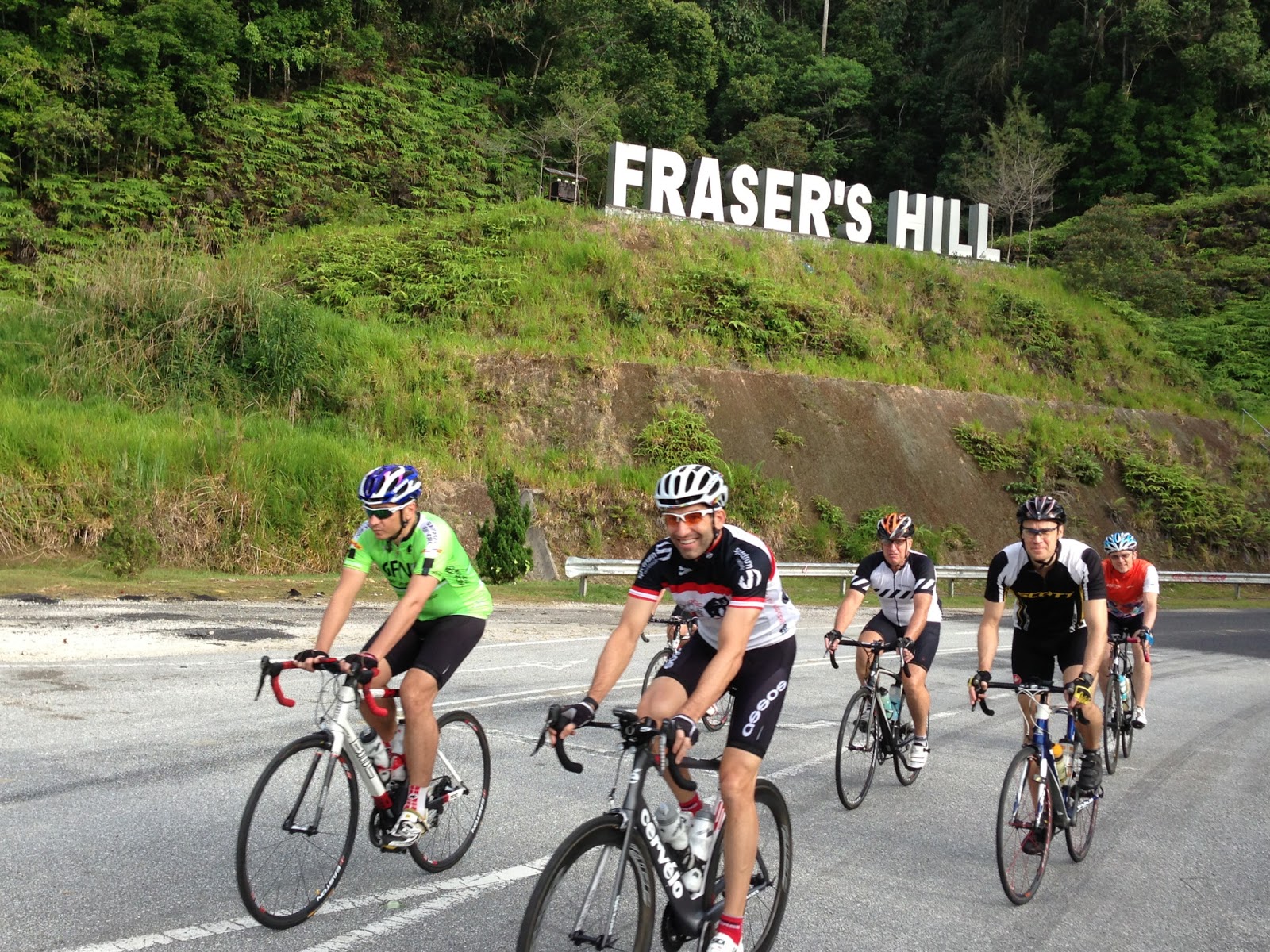 Just back from a great little outing with our bicycle touring operation Equipe Nomad.

We did a slight variant on our usual Fraser Meets Gohtong ride at the request of the group. The request was that we started somewhere a bit nicer than our usual Gombak base, so we put them in the idyllic setting of Kampong Janda Baik in the foothills of Genting Highlands. 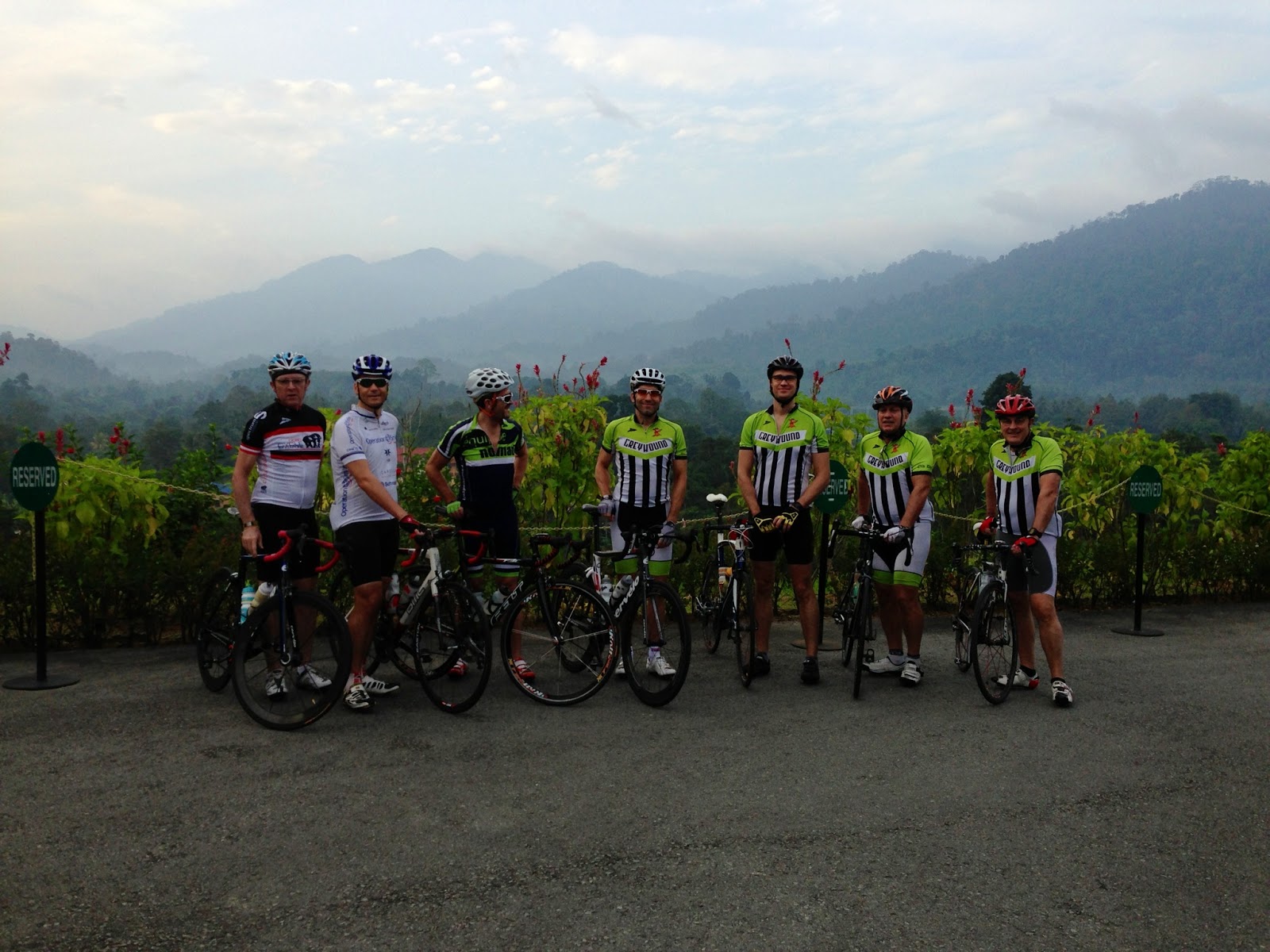 The group included returning riders Dirk Izzo, Jim Rowe, Paul Finn and Margus Uprus of the cycling group The Greyhounds. All strong riders that have survived the tortuous ride from Gua Musang to Cameron Highlands with us (a 125km stretch that has an elevation gain of over 3000m!). New faces on the team were: fellow Greyhound Dave Malligan and new honorary member Rodney Thurston. Paul, Dirk and Rodney are preparing for Alpine adventures in July including the Etape Du Tour. 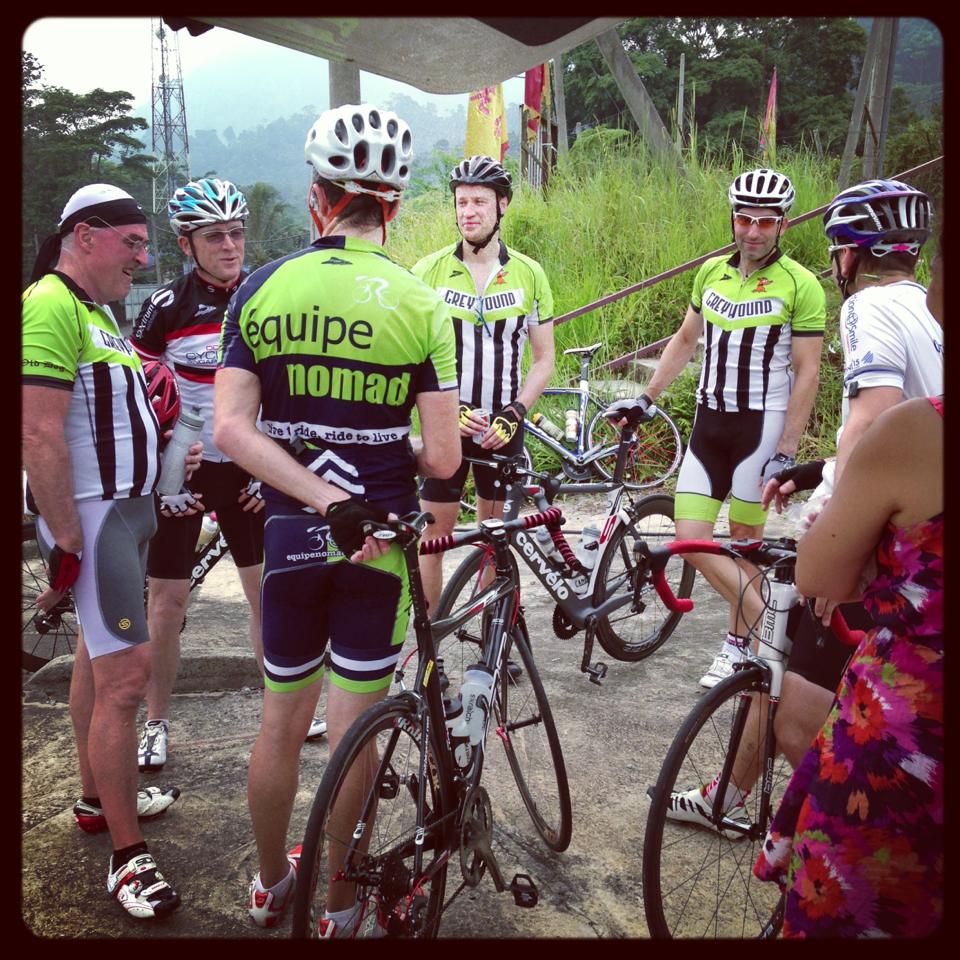 In order to have something to replace the initial warm-up climb up to Genting Sempah from Gombak, I routed the ride through Bukit Tinggi from the lower approach, which means within 15km of starting, we were already grinding up an, albeit short, 15% climb.

The next hurdle was the 1km climb above the Genting Sempah rest area. After climbing through gradually increasing gradients for 4.5km it involves one last kilometer, much of which is at an average gradient of 10% that kicks up a bit more at the top. By the time the group got to the top I was starting to get a few gradient-related grumblings. 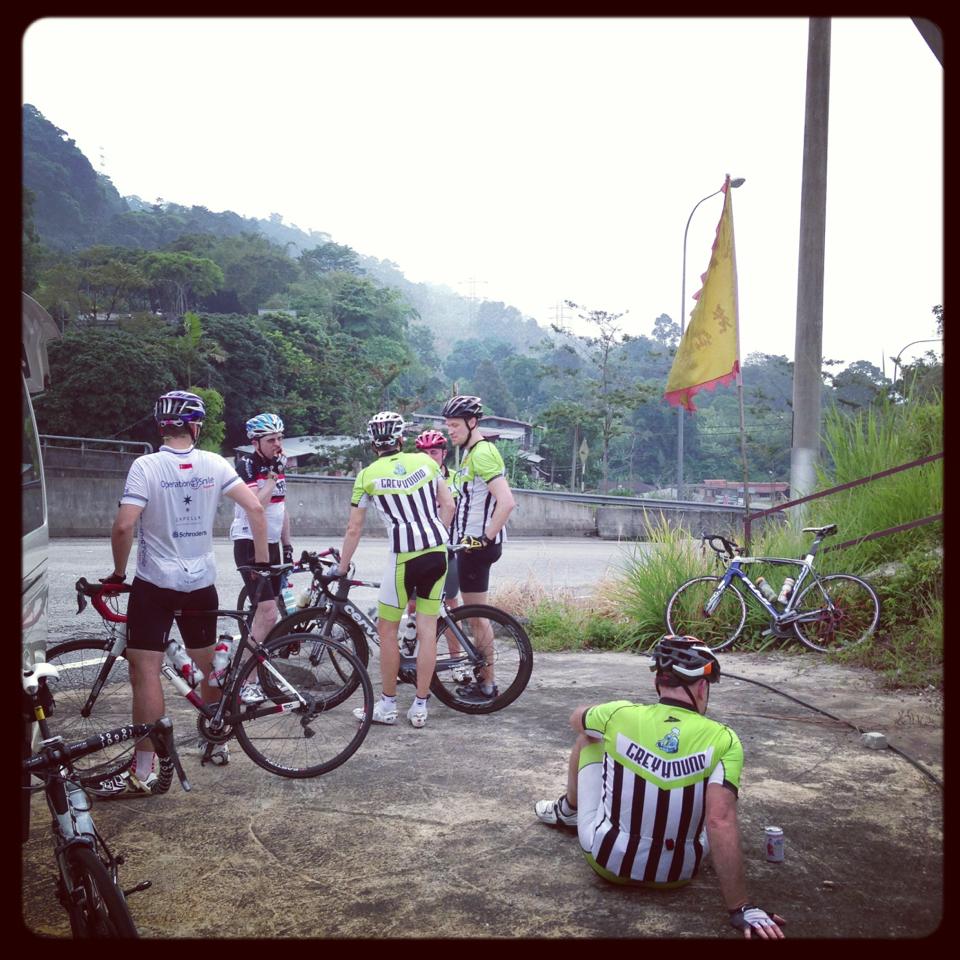 OK. Warm-up out of the way. After a quick re-fuel on June's Flapjacks and a tray of 100+, we resumed the order of the day. From this point it meant a descent of around 18km, fairly technical at points, but nevertheless lots of chance for free speed! After that we rolled through to Bentong on the little-used Old Bentong Road that follows the Sungai Benus river through some gorgeous countryside. 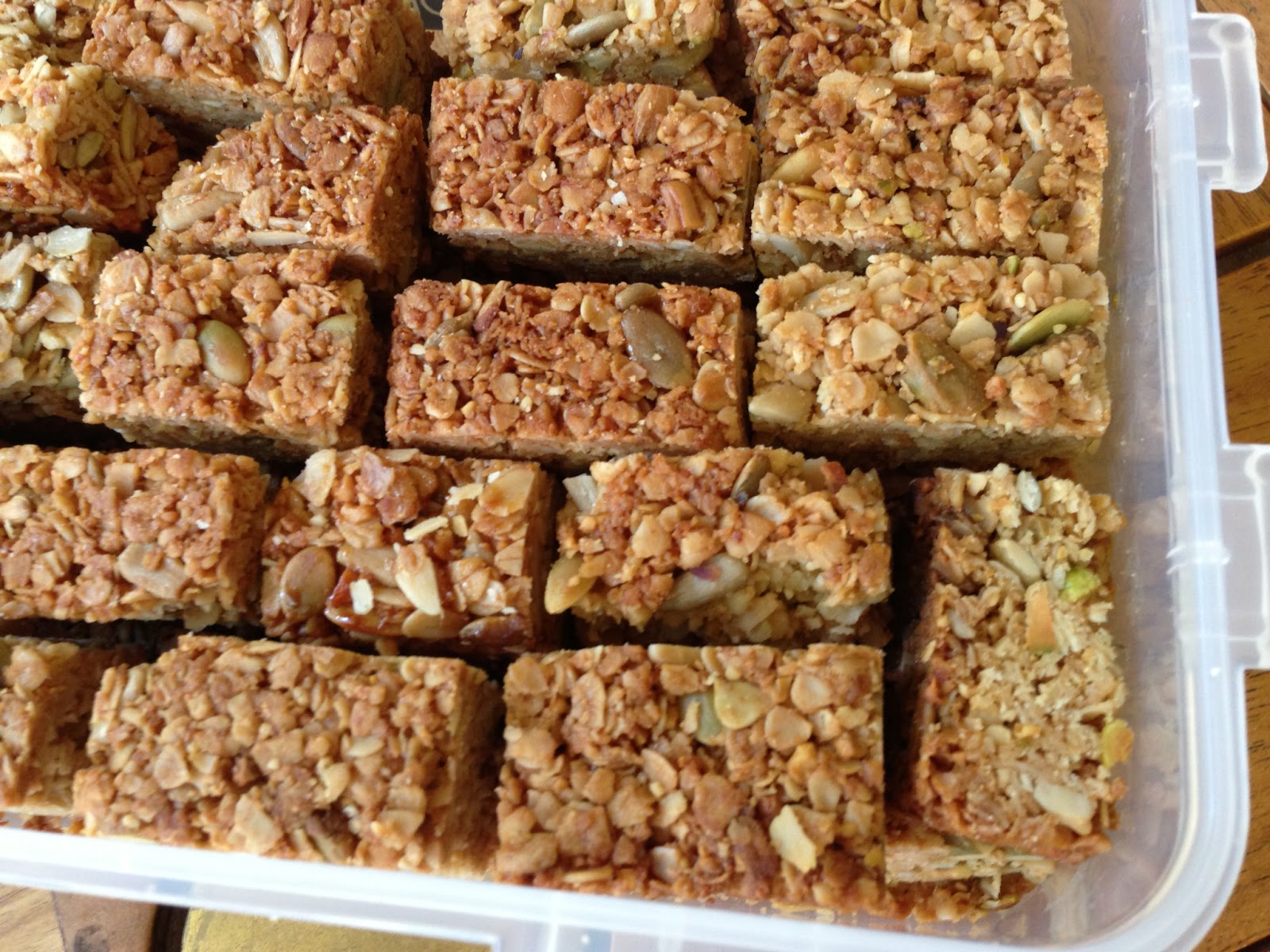 Rodney managed to blow a tyre in a strange spot - we were all stationary at a brief re-grouping stop just coming into Bentong. As the only one on tubulars in the group it was a bit of Murphy's Law at work, and could have been a bigger hassle, but the group effort over a bowl of noodles meant that in the end it was a relatively painless switch.

Bentong was noodle stop around the half-way point at 60km. A typical settlement slightly off the beaten track of the main Malaysian east-west traffic jugular, Bentong offers some pretty decent food in an environment that still has echoes of Straits Chinese tradition. 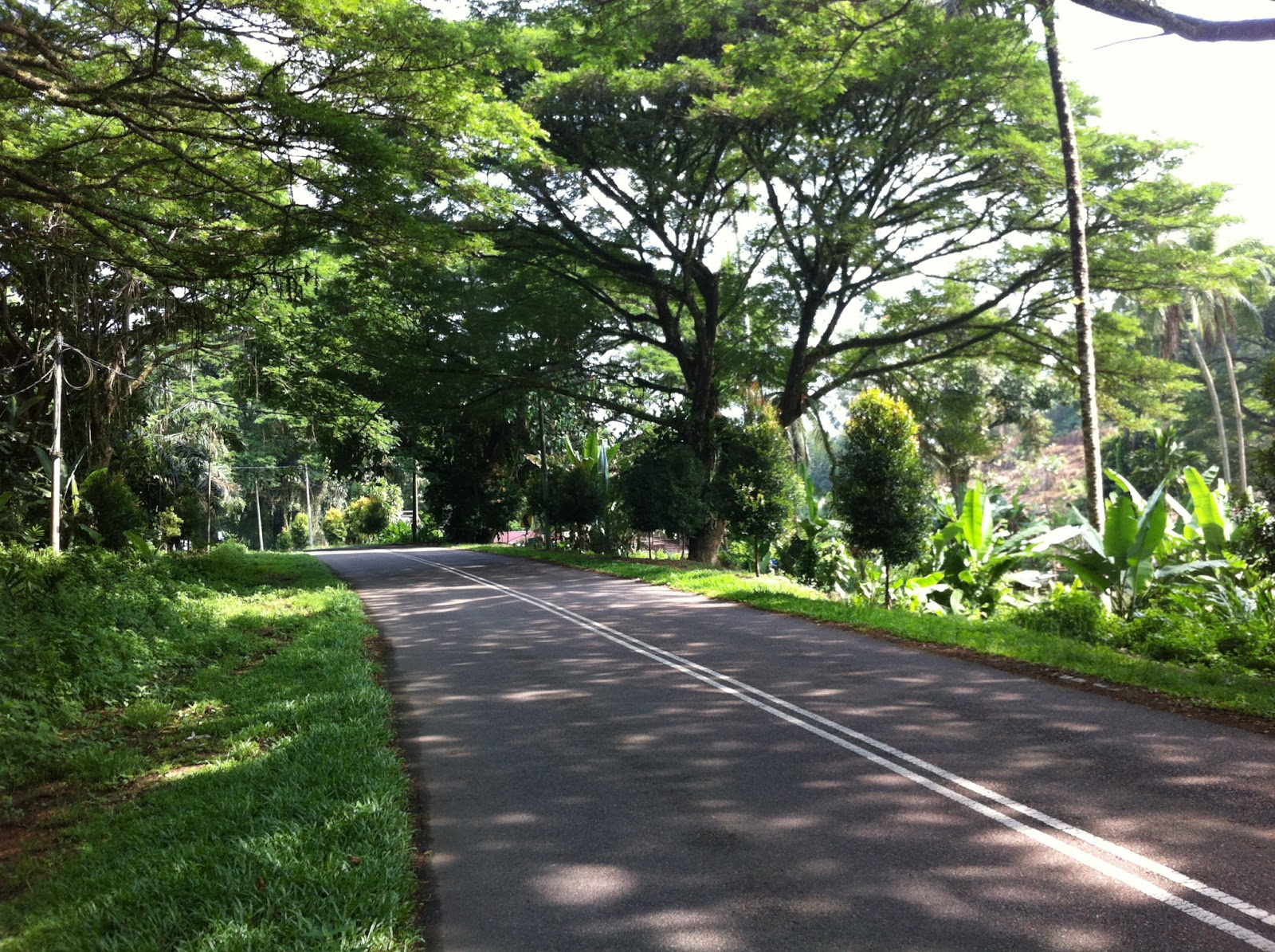 After about another 6km we turned off onto the quiet tranquility of the Fraser's Hill road. Time to zone out and enjoy the moment. After a 20km stretch, that I call "rolling" but the flatlanders refer to as "hilly", we arrive at a spot that I maintain is a contender for the most beautiful bit of road on the planet, shaded by a natural canopy of gigantic trees. This is just before the 30km climb starts, and a good moment to stock up on drinks and some fuel.

From here on the trajectory is upward. The first 22km is fairly gentle, with an average somewhere between 3 and 4%, and shaded by trees pretty much all the way up, which is welcome at this point since the day is getting warmed up. Margus and Dirk pushed on ahead at a pace that nobody else could muster to begin with. Margus (the baby of the group in his mid 30s) is affectionately known as "the engine" by the rest. His ability to continuously crank out what must be in excess of 300 watts comes from a youth spent as a competitive swimmer and triathlete. Scary to imagine what he could do with some structured training!

After about half an hour you notice it getting cooler as we gain altitude. We met a roadworks and some freshly laid tar on the way up which left Jim's tyre with a bulge, but with a reduction in air pressure it was good to go - at least for the last few slow, upward kilometers. 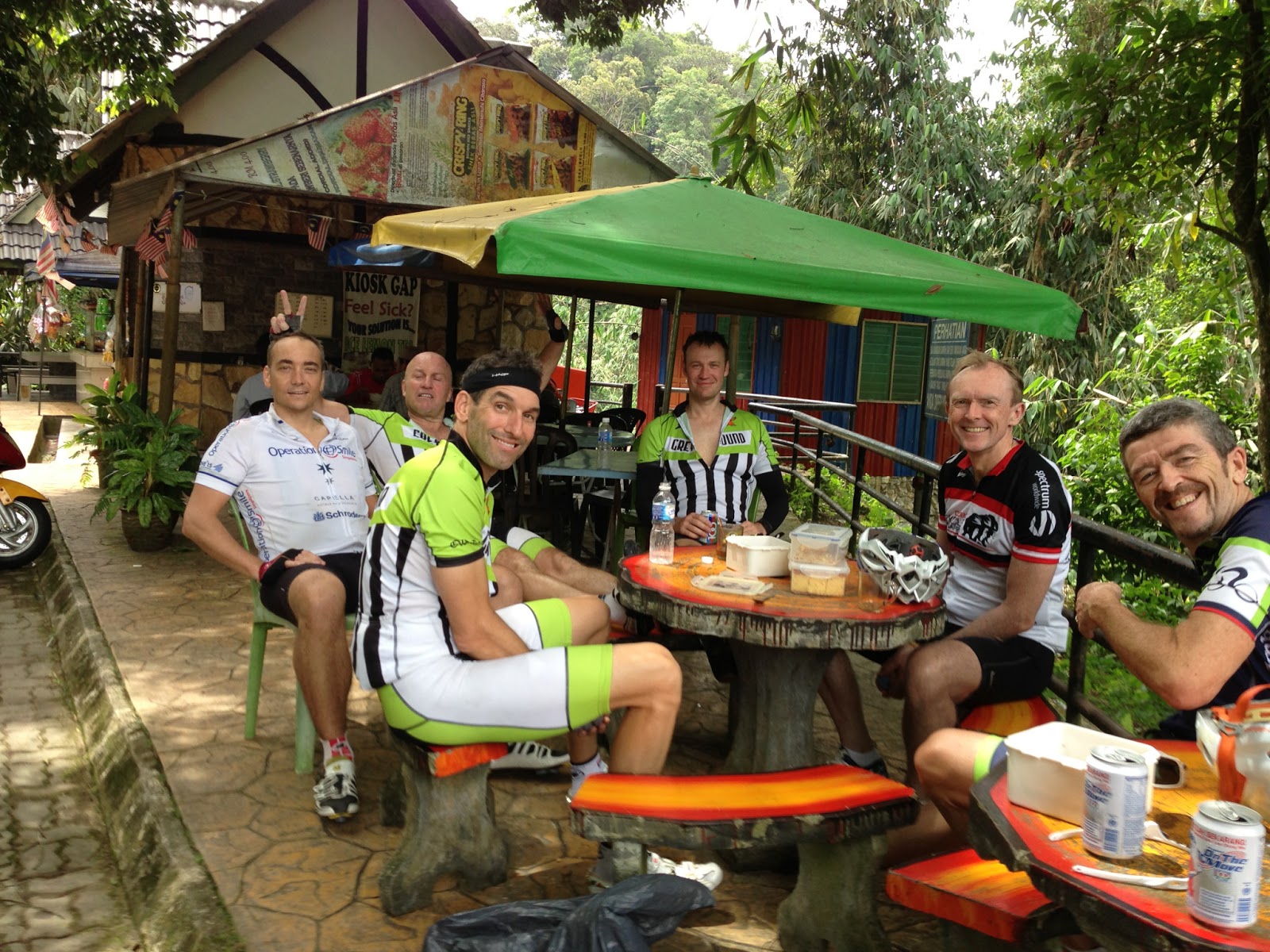 We re-grouped at the rest area known as Fraser's Gap before the final push. The last 8km is a bit more varied with some sections up to 8 or 9%, but it is a truly gorgeous little winding road through the trees with occasional open vistas down the mountainside, and since traffic is only one-way at this point, you can really get into the moment. Paul really got into his stride at this point and rode through the group to lead the way to the top with Margus tagged on behind.

The stage's official finishing point is the clock tower in the town square at Fraser's Hill at an altitude of 1200m. Though there's still another km of climbing up to the hotel, it at least presents us with the best opportunity for a group shot. We managed to avoid making the previous group's mistake of having a beer before this last bit. 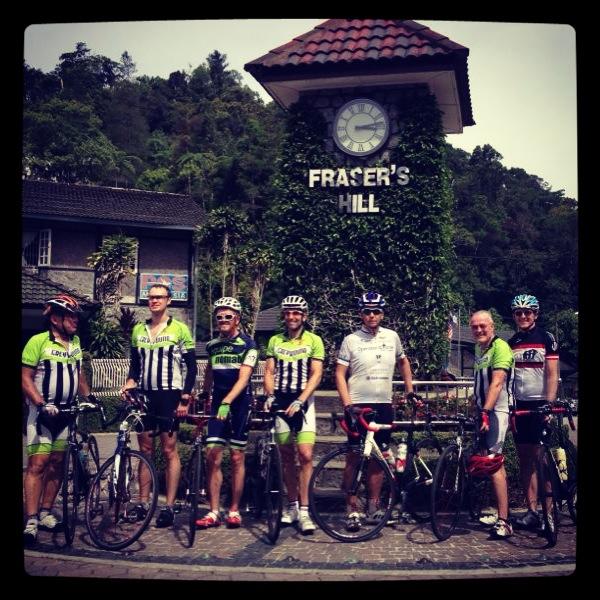 Beer-o-clock was called for 5.00pm, and so after showers and a bit of stretching we headed down to Scott's Bar for refreshments that very quickly evolved into fully-fledged dinner once the support crew joined us.

Fraser's Hill doesn't have much to offer in the restaurant department. In a country with some of the best food on the planet, it's a shame that somebody doesn't make more of an effort to put Fraser's on the culinary map. Anyway, Scott's Bar does it's best to make up for it and some of their offerings are really quite good - especially the sirloin steak. And a good selection of European beers! 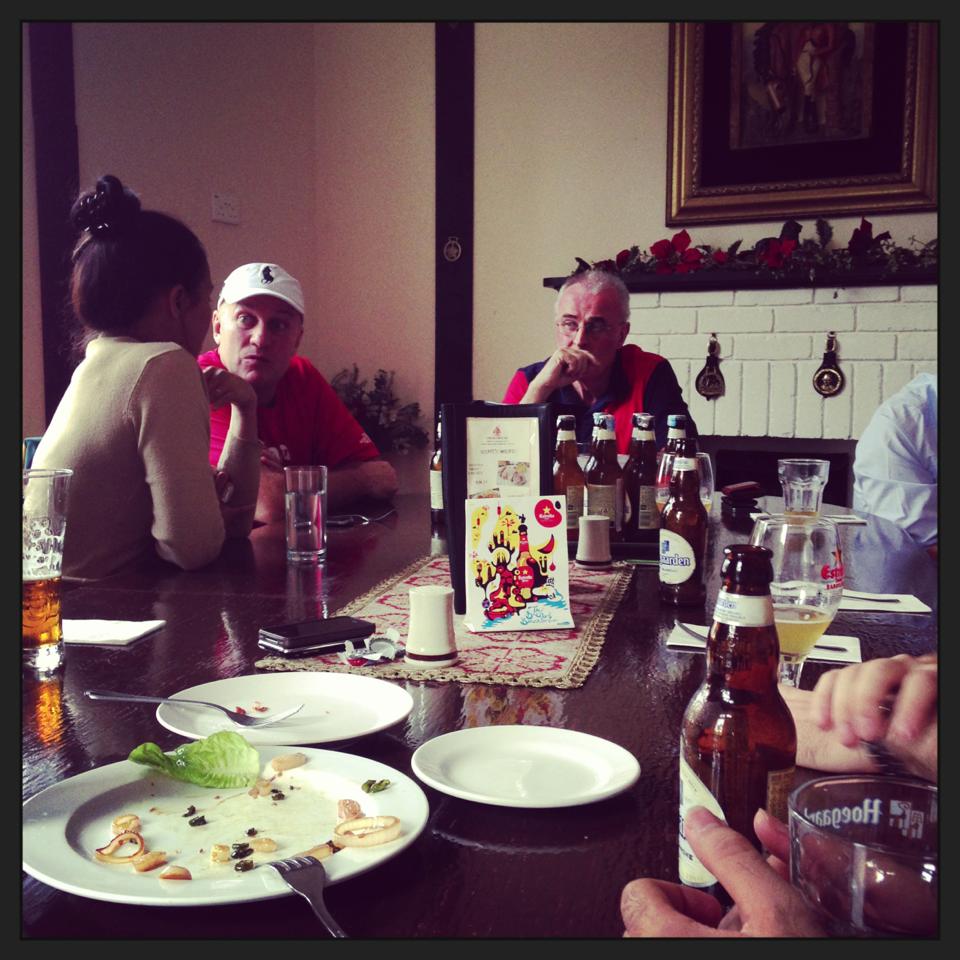 The next morning we set off around 7.30 down the winding 10km descent to the main road. This is really one of my favourite moments in these rides - this descent just after dawn with the views and morning mist  - I'll never tire of it. It hits pretty much all of our riders the same way, and is probably one of the main reasons this is our most popular route.

Once we're on the main road, it's a fast descent for the next 30km down to Kuala Kubu Bharu. I take the lead for the first part - it's fairly technical, and a knowledge of the twists, turns, and road-surfaces is pretty crucial. After that it straightens out past the reservoir and the Sungai Selangor dam, and we can really open up for the last stretch into KKB and our noodle stop of day 2. 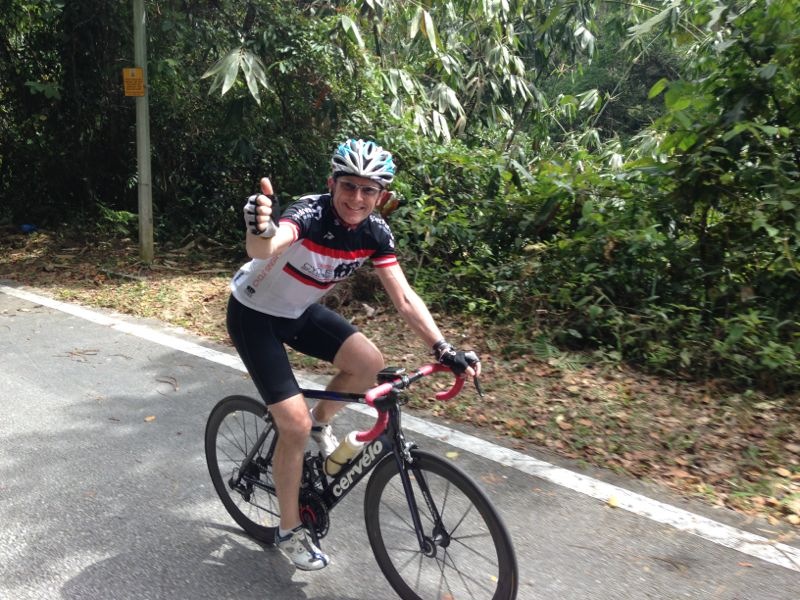 It's great to see Paul, the normally reserved Brit, get quite excited - even effusive - about these fast descents. I completely share that - I mean it is one of the great joys of cycling - as do Dirk and Margus who, after initial tentativeness about being able to really let go, eventually followed my wheel and we made the whole 30km plummet as a group of 4.

This video shows Margus, Dirk and Paul on the fastest section of the descent from above the dam down to the town of KKB. We hit 70kph at one point. That was some serious fun!


We covered the next 20km as a unit and turned left together at the crossroads to Genting Highlands, here taking a quick break for pees and flapjacks - and to shed a bit of weight. From this corner it's around 16km to the roundabout at Gohtong Jaya, the last 12 of which is an average of around 9% with some particularly tortuous, unrelenting sections.We have to stop at the guard house about 1km before that now due to some odd restrictions.

Our King-Of-The-Mountains classification was officially won by Margus who made it up the beast (from the crossroads) in 45 minutes. That's fast! Dirk was next at 46:30 and he rest of us rolled in somewhere behind. The climb is a real grind and everyone was pretty spent by now, though fatigue was definitely tempered by a certain sense of achievement. 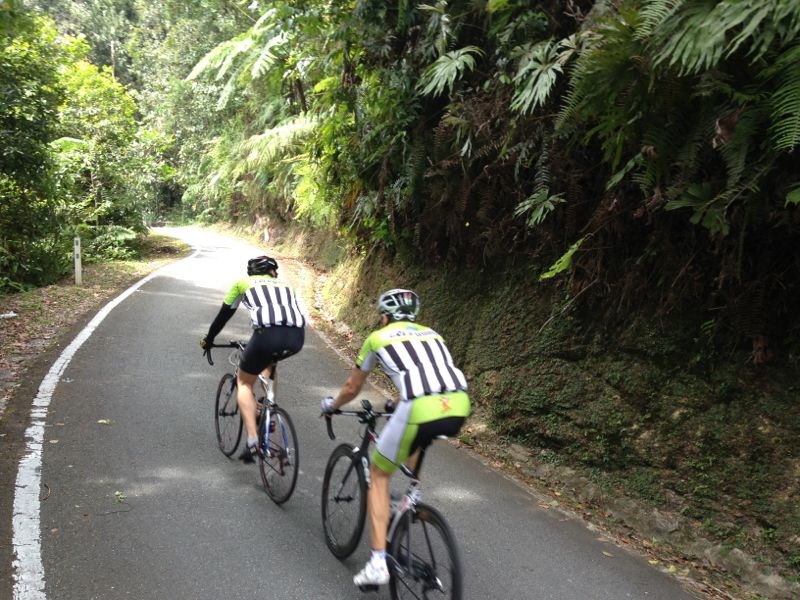 The whole group did a great job and the 4 repeaters were really on a different level of fitness from the previous time with us. It's really heartening to think that we're providing such positive motivational forces to those that ride with us, but we do have a serious advantage in having such a great place to do it! Unfortunately Rodney wasn't feeling at all well the second day so he spent a lot of it in the vehicles. I'm sure he'll bounce back soon, and hope he's raring to go by July in the Alps.

Finally figured out the best way to use the GoPro camera - strapped to my helmet. Pity I didn't get more of the ride on it but look out for improving footage of our rides from now on.
Posted by Cafe Rider at 2:27 AM